The father knows best why the Vikings are in good hands with first-year head coach Kevin O’Connell.

“He’s always been a natural leader, even from the time he was a young guy in junior high and high school,” Bill O’Connell told Serby Says of his son. “He was a captain at his high school and he was a four-year captain at San Diego State. And he’s perfected it, too. He’s been a student of leadership, and a student of the mentors he’s played for and coached with and coached for.

“He’s very, very in tune in the modern generation and his generation as to goal-setting and he’s more people-oriented. He believes you can do things being positive and supporting and reinforcing his players, reinforcing the staff and I think he’s a strong advocate that negativism is not gonna get you anywhere, you gotta come every day to the job with a positive attitude and again, not worried about mistakes, just working to avoid them, not repeat them and improve yourself and improve your team and the individual play of his players. He stresses that to his players every day.”

Bill O’Connell will be there Sunday at U.S. Bank Stadium with his wife, Suzanne, and her 88-year-old father, watching his son’s 8-1 Vikings try to beat the Cowboys and close in on clinching the NFC North title.

“You want the best outcome for him,” Bill O’Connell said. “You want him to make good decisions. You want his team to respond. For me personally, there’s a lot of pressure.

“I haven’t drank an alcoholic beverage since he’s played or coached during the game, and I continue to do that. I will not have a beer until after the game,” he said with a laugh. 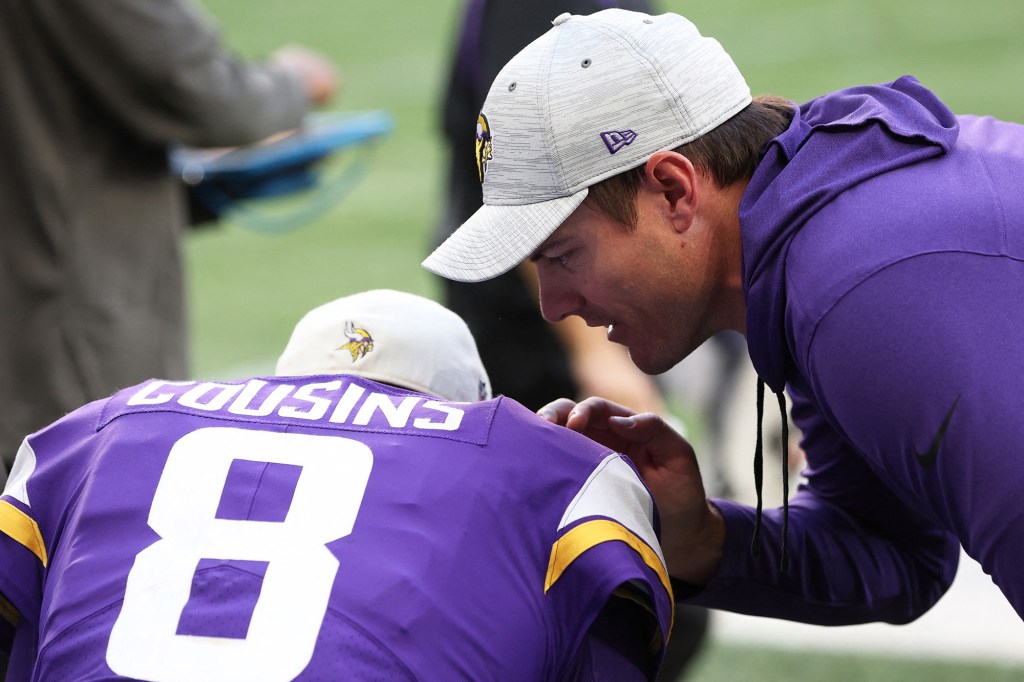 “First interaction with this man, you would understand that he’s a leader, or if you’re stranded on an island somewhere, this guy might be the one to coordinate how to get out of there,” Vikings defensive tackle Harrison Phillips told Serby Says. “Just his presence alone kinda demands respect, and then he gains respect by giving respect, and I think that’s a really cool trait he has.”

“I would say it’s a collaborative leadership,” Vikings wide receiver Adam Thielen told Serby Says. “It’s a leadership that takes in account the other leaders of the organization to come with educated answers as far as how to do things, how to structure practice, how to maybe adjust things when they need to be adjusted. So you can really feel that even though that we’re not involved in a lot of those conversations. … It’s not just him making decisions off of emotions or different things like that.”

The town is still buzzing about their Miracle Vikings following the improbable comeback win last Sunday at Buffalo: a 33-30 overtime thriller featuring Justin Jefferson’s ridiculous one-handed catch on a fourth down to keep a fourth-quarter touchdown drive alive before Minnesota recovered a fumble in the end zone in the final minute of regulation.

“He kinda motivates you by just letting you be yourself and finding he best way to make the best version of yourself,” Philips said. “He’s not a big whoop-and-hollering, big-talking guy, so that when he does talk, when he does whoop and holler, you know that it’s big.”

“Sometimes it’s through visually, like showing us on film like, ‘Hey, this is how it’s done, showing examples of players making plays, doing things above and beyond to help his team win,’ ” Thielen said. “It’s a really good motivation technique because guys see that and they want to be on that film in front of the whole team.”

Kevin O’Connell, 37 now, was an Eagles fan who idolized Randall Cunningham, sitting at the Vet with his father, before becoming a 6-foot-5 quarterback who was drafted by the Patriots in the third round out of San Diego State in 2008. 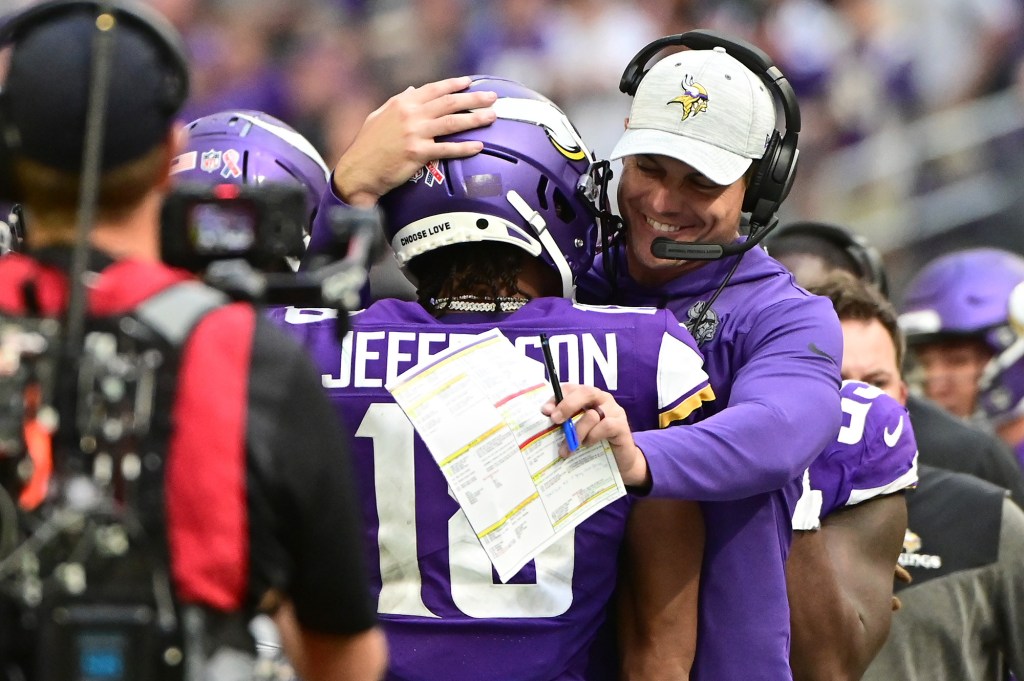 Luckily, he got to be a sponge alongside Tom Brady. He was 4-for-6 for 23 yards as a rookie and never threw another NFL regular-season pass at several other stops.

“At that point he viewed Brady as a definite icon and as a leader and as somebody who Day 1 when he walked on the facility at Foxborough, he was completely in awe of Tom,” the father said. “But Tom was fabulous. Tom took him under his wing, and they had a great relationship while he was there and he tried to exchange and teach Kevin quite a bit, as did [Bill] Belichick and the other coaches, Josh MvDaniels. They still have a very good relationship to this very day as friends.”

Luckily, Kevin O’Connell got to observe Belichick as up close and as personal as anyone possibly can.

Bill O’Connell mentions the impact Rex Ryan and Mike Pettine, now Vikings assistant head coach, made on his son when he was with the Jets for two stints in 2009-10 and back in 2011 after a quick stop with the Dolphins.

“It was funny, this thing about him coaching went all the way back to the days of Mark Sanchez when Kevin was kinda the quarterback whisperer if you will, or the father confessor to Mark Sanchez,” Bill O’Connell said. 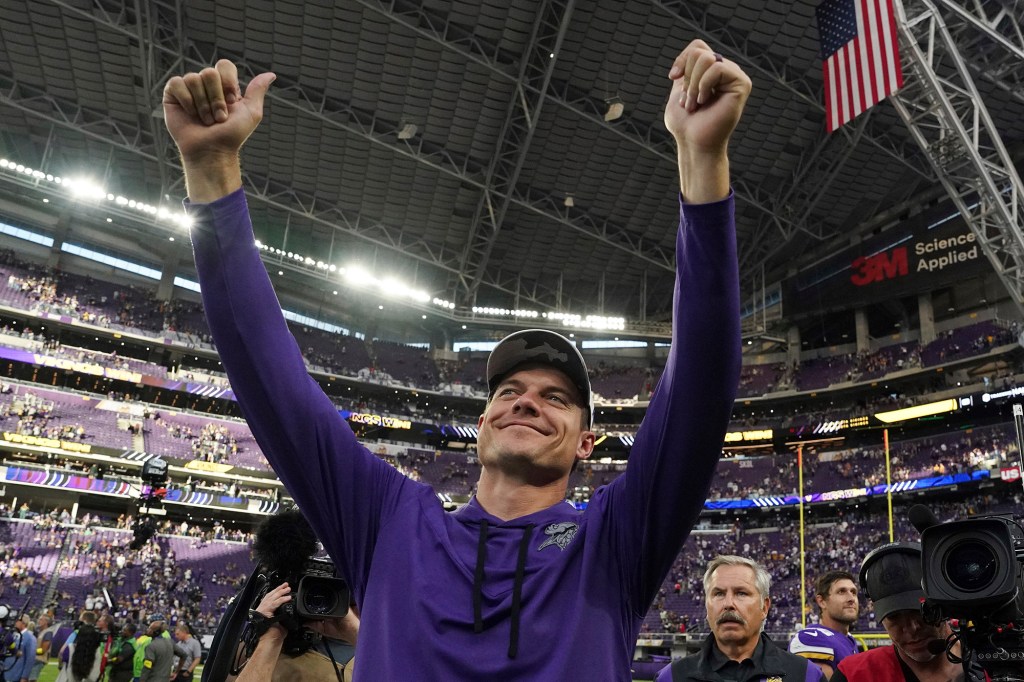 It is never easy surrendering your NFL quarterback dream.

“I think it’s tough for any young man like Kevin,” Bill O’Connell said. “There’s 32 starting jobs every season, and there’s many, many talented human beings who play quarterback in the National Football League. … I think he was a precursor to some of the guys that play today. However these guys that play today are highly, highly accurate.”

But the love of the game wouldn’t let his boy leave it after retiring in 2012.

“He just became more and more intellectually involved in the game, and eventually that transition was easy for him because he join realized when his playing days were over, he had a tremendous interest and a love for staying in the game intellectually and just loved the game, and that’s why he’s migrated to the coaching ranks,” Bill O’Connell said.

His son learned his craft at several different coaching venues before joining Rams head coach Sean McVay as offensive coordinator in 2020 and winning Super Bowl LVI this past February at SoFi Stadium.

Bill O’Connell, who lives in Carlsbad, Calif., developed a friendship with McVay and his staff and players.

“We lived and died and we cried and we cheered,” he said. “It was incredible. It was a fantasy year.”

Some 20 extended family members, including five of Bill O’Conell’s six grandchildren, got to watch Kevin O’Connell hold the Lombardi Trophy.

“The absolute tearjerker for the family was my daughter [Kelly] and grandkids, Kevin’s children, were allowed down on the field after the game and they ran out, and just to watch the whole family jump together and run, and run to him. It was a moment that my wife and I will never ever forget,” Bill O’Connell said.

Now Kevin O’Connell and rookie general manager Kwesi Adofo-Mensah have a team to believe in.

“Everyone’s bought in. … No one is bitching and complaining and talking about not playing or not starting or not getting the playing time they want,” Phillips said. “I haven’t heard any of that in our locker room, which I think is a rarity in this business.”

“It’s a real relationship from coaches and players,” Thielen said. “I’ve never really seen that before in my career.”

There is an easy relatability between the former quarterback, now head coach, and Kirk Cousins, who has five game-winning drives as the Vikings have won seven straight games by eight points or fewer.

“I think he really understands that everybody can’t be coached the same, and he knows that to get the best out of everybody individually you have to do things differently per individual,” Thielen said.

The postgame flights back home, on which first Cousins (aka Kirko Chainz) and then Patrick Peterson, posed shirtless with chains have been a viral sensation.

“The last few plane trips on the way back, I don’t think I sat down once,” Thielen said.

Kevin O’Connell has been a breath of fresh air following Mike Zimmer.

Bill O’Connell was a 220-pound strong safety and weak-side linebacker at Villanova with an NFL dream, but a neck injury shattered it at the end of his junior year.

“It was a very profound and sad moment for me,” the father said. “But to have a son, and then have him take up the game of football, and have him engage in the playing and then the coaching side of it, it’s the best of both worlds for me, I’ll tell ya.” Hard to believe how we’d survive without NFL 40... Park Chan-wook On How A Language Barrier Became...