It was a 800-page anthology of photographs, magazine clippings and movie stills of the late Monroe, née Norma Jeane Mortenson, collated by the film’s director Andrew Dominik. He’d spent the past decade collecting the reference images for his fictionalized take on the unglamorous life of pop culture’s most archetypal glamor girl.

Now, after 10 years of development, Dominik’s cinematic brainchild, based on the 2000 best seller of the same title by Joyce Carol Oates, is being rolled out on big and small screens by Brad Pitt’s production company Plan B. 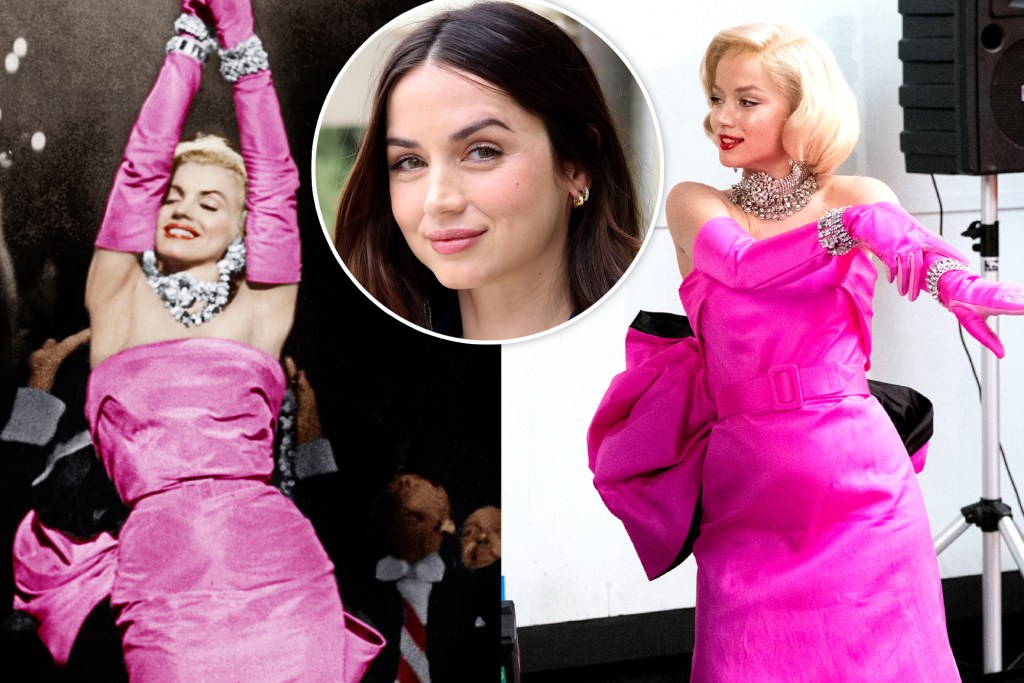 The screenwriter’s picture binder was given its hallowed nickname by the team charged with making over de Armas — hair stylist Jaime Leigh McIntosh, makeup artist Tina Roesler Kerwin and costume designer Jennifer Johnson — while shooting in Los Angeles in 2019.

“[The Bible] was incredibly massive, but helpful because it narrowed down the looks he wanted us to re-create,” McIntosh told The Post. “The more I looked at those images of Marilyn, the more I realized I needed a few different shades of blonde to [re-create her hair].” 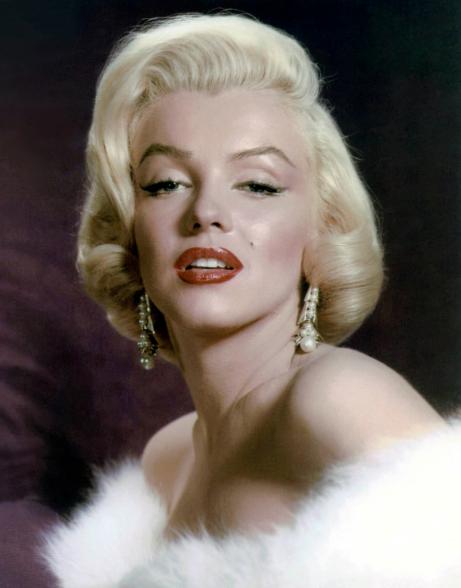 McIntosh dyed each of de Armas' human-hair, customized wigs different shades of blonde in effort to recreate Monroe's different looks at varying stages of her life. Corbis via Getty Images 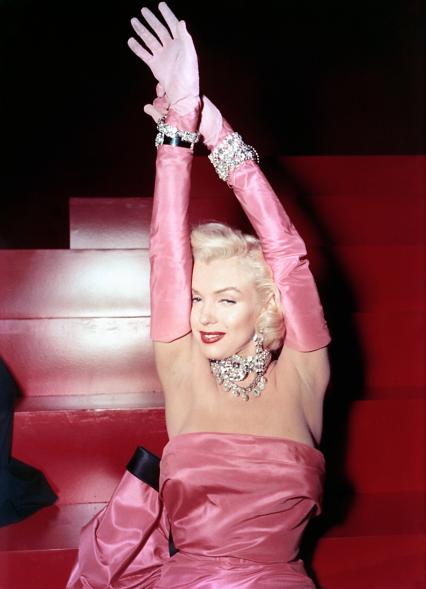 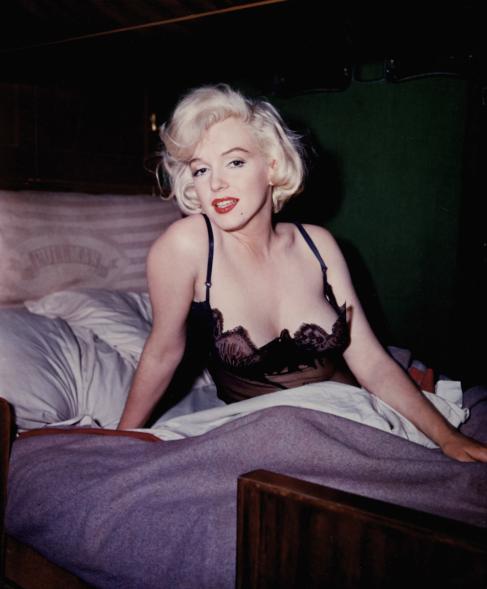 Monroe explored various shades of blonde throughout her short life, wearing a platinum hue in the years leading up to her tragic passing.

For the trio of experts, turning the Cuba-born de Armas, 34 — star of 2019’s “Knives Out” and 2021 James Bond flick “No Time to Die,” both opposite Daniel Craig — into the 1950s bombshell was a daily, three-hour task. (De Armas’ casting initially sparked backlash owing to her ethnicity and accent; however, Monroe’s estate publicly defended her portrayal.)

But McIntosh looked to the “good book” for guidance as she styled the five customized, human-hair wigs used to duplicate Monroe’s lush locks. Two darker blonde wigs were used to portray a young Marilyn, while three “true blonde wigs” were used to portray the starlet in her heyday until her death from a barbiturate overdose on Aug. 4, 1962, at age 36.

The units, each constructed with a lace base and costing around $9,000 apiece, were all specifically structured to resemble Monroe’s widow’s peaked-hairline and to properly fit de Armas’ head. McIntosh dyed the hairpieces to amplify their tones and add depth at the roots for a more authentic appearance. 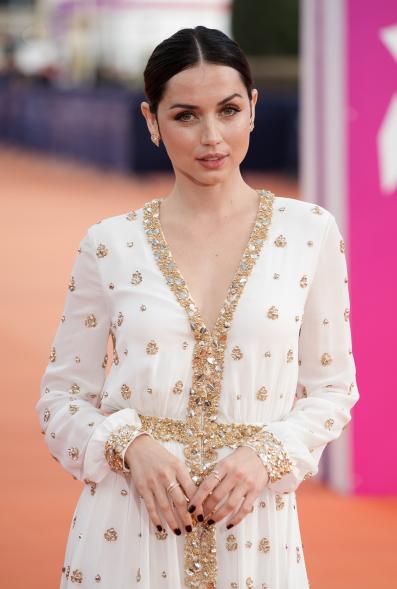 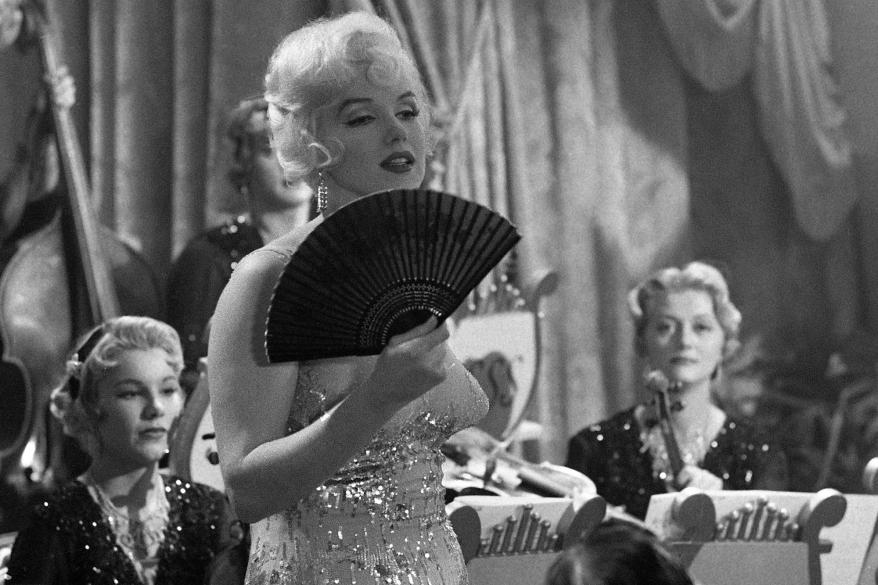 “Every morning I’d start by pulling all of her hair back and adding a [protective] treatment to it to keep it nourished throughout the day,” said McIntosh. “Then, I’d put a wig cap over her head before passing her along to Tina.”

That’s when Roesler Kerwin would adjust de Armas’ natural hairline by using three silicone prosthetics to replicate a flesh-like scalp that covered the majority of her head.

“The prosthetics basically created a bald cap so that when the wigs went on, they’d looked like they were going on top of skin,” explained Roesler Kerwin. “Once they were in place, we’d airbrush the whole thing [to match the color of her foundation].” 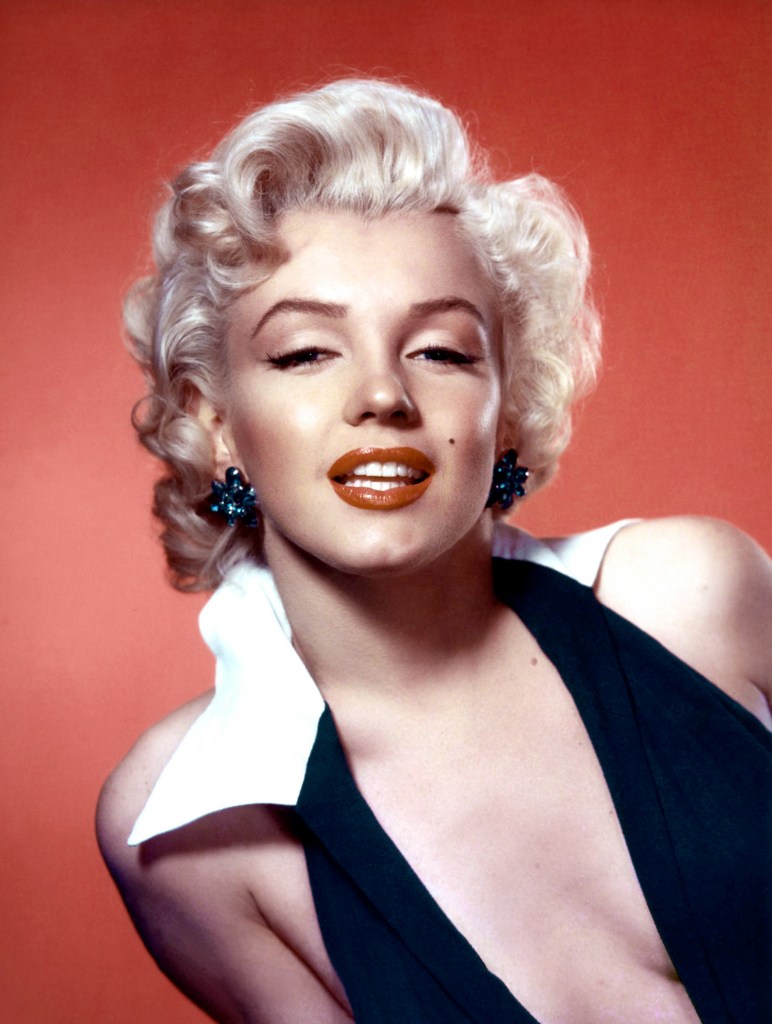 The makeup and hair professionals reshaped de Armas’ hairline, eyes, ebrows and lips in order to transform her into Monroe.Corbis via Getty Images

The hazel-eyed lead also wore blue contact lenses, while false lashes were individually applied to the outer corners of her eyes to help alter their shape. The time-consuming process allowed Roesler Kerwin to control the glitz in different scenes — amping them up “to create Monroe’s full glamour looks,” she said.

To clone Monroe’s heart-shaped pout, the makeup artist used lip pencil to redraw de Armas’ lips into “more of a rounder shape.” Then came lipstick, and a small dot of brown liquid eyeliner just above the top-left peak of her upper lip to resemble Monroe’s signature beauty mark.

And when it came to re-creating Monroe’s most legendary silhouettes, Johnson spared no expense. 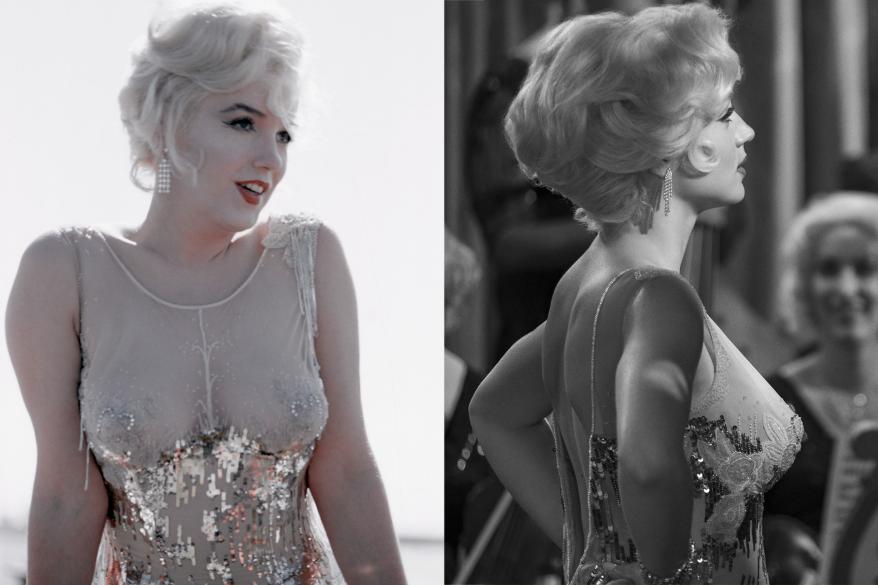 Johnson hand-stitched thousands of gems to de Armas' dress to recreate the gown Monroe wore while singing "I Wanna Be Loved by You." NYPost Composite 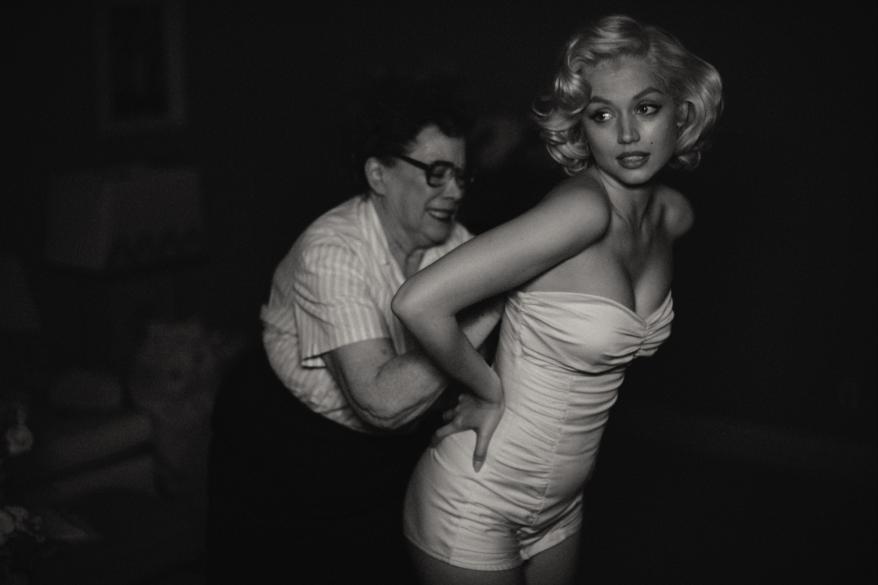 De Armas spent over three hours a day in hair, makeup and wardrobe in order to become Monroe. 2022 © Netflix 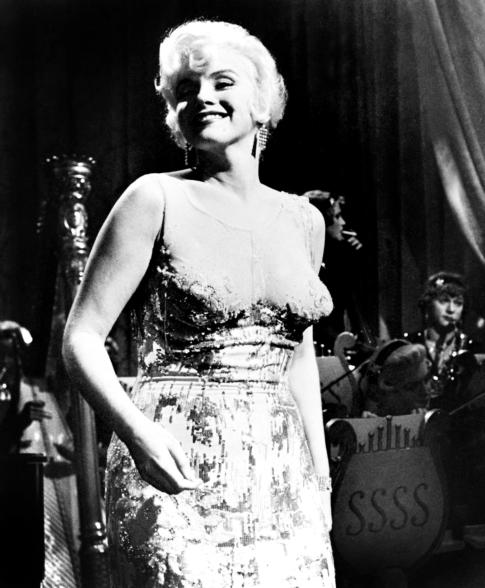 In the film. Monroe grapples with emotional and mental trauma while filming "Some Like It Hot." Courtesy Everett Collection

“The dresses were really expensive,” said the costume designer with a laugh. “The most expensive one was probably [the beaded] dress she wore in ‘Some Like it Hot’ when she’s singing [‘I Wanna Be Loved by You’] with the band.”

The original gown donned by Monroe in the 1959 rom-com earned designer Orry Kerry an Academy Award that year.

To reimagine the sheer, jewel-embellished ensemble for de Armas, Johnson hand-sewed thousands of beads and Swarovski crystals onto hip-hugging finery. In total, the costume cost a whopping $15,000 to design. 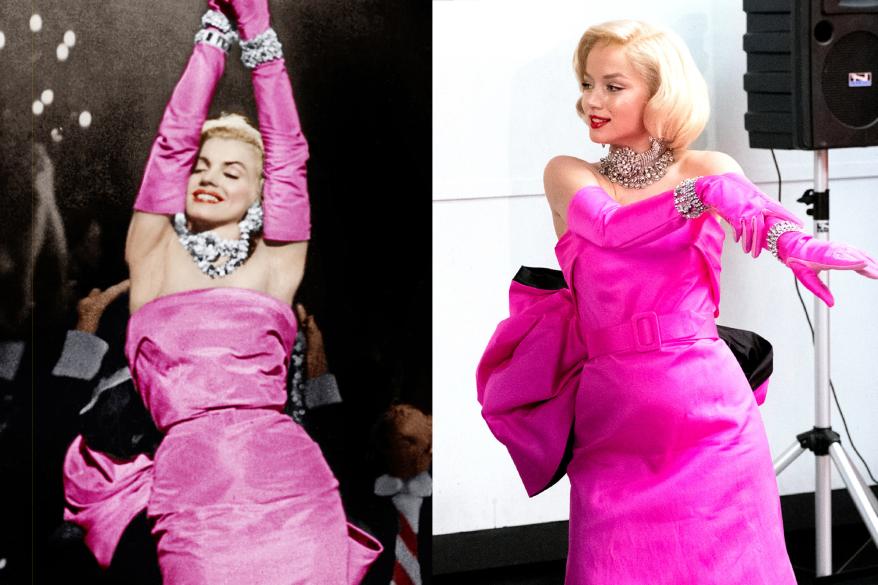 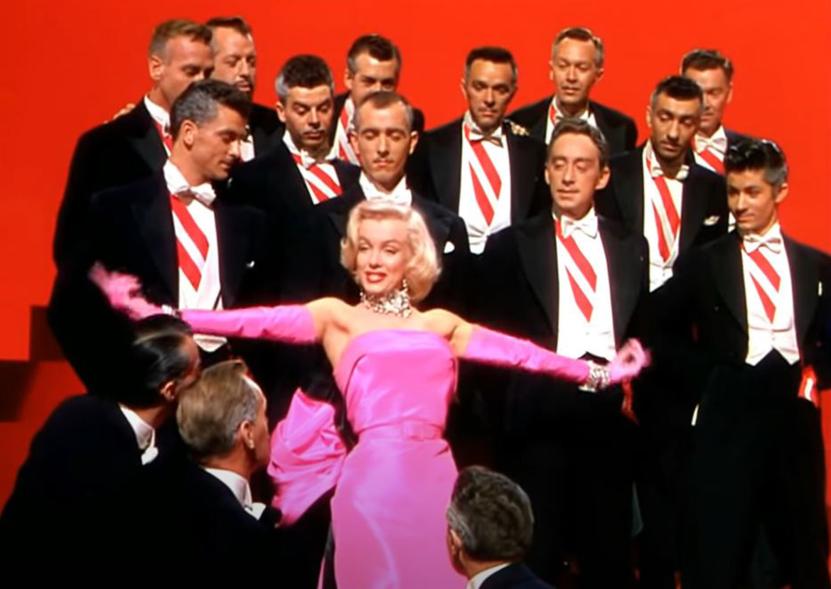 But the most labor-intensive — albeit satisfying — garment to reproduce was Monroe’s iconic, billowing halter dress also designed by Travilla for 1955’s “The Seven Year Itch.”

When she couldn’t source the original fabric that had been custom-made in Italy, Johnson substituted it with a bolt of polyester jersey.

To achieve flawless folds in the skirt, it was placed into a mold and pressed under heat. 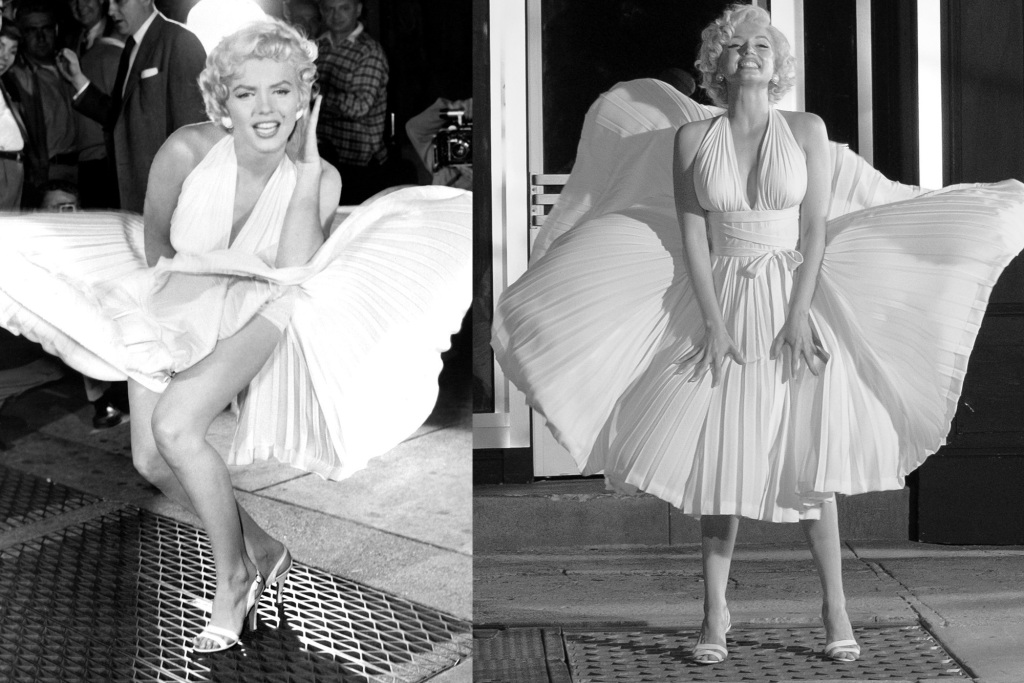 Johnson then hand-sewed the pleated piece onto the bodice before dying it ecru. The emulation cost over $11,000.

But Johnson says it was worth every penny.

“When [de Armas] walked on set in the dress and the fans turned on, the skirt just flowed [so beautifully],” she gushed.

“At one point in the movie, the camera’s just luxuriating on it, and you can really appreciate the construction.” Hugh Jackman to return as Wolverine in...