How ‘What We Do In The Shadows’ Creates Its Vampire Magic – Contenders TV: The Nominees Fans can’t get enough of FX’s What We Do in the Shadows, which is airing its fourth season, and apparently neither can the critics. The show is nominated for seven Emmy Awards including Outstanding Comedy Series.

“From a writing standpoint, for us, I think as much as the show is an escape for others, it’s also an escape for us,” Robinson said during Deadline’s Contenders Television: The Nominees panel. “I think it’s a real opportunity for us to turn off and not be so handcuffed to making a show that is about what’s going on in the world.”

Added Naftalis: “This is a show where it’s truly whatever the funniest, stupidest jokes are, will make it into the final show. I think that it makes it a truly enjoyable half-hour. We have a ridiculous amount of fun making it so hopefully, that shows up too.” 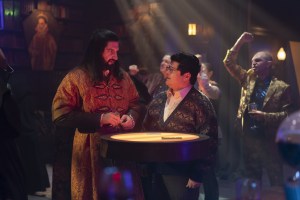 Kayvan Novak portrays Nandor the Relentless, the oldest vampire of the group, who can’t seem to get along in the world without his familiar Guillermo (Harvey Guillen). Seeing him now on screen is a long way away from when he was still earning his fangs in the pilot episode.

“If I look back to the first day of filming the pilot compared to now, the first day felt like baptism by fire,” said Novak. “You’ve got Jemaine [Clement] and Taika [Waititi] on both sides just kind of telling you things that you should do and you’re working for them — you’re trying to play vampire and they’ve been playing vampires for all these years. So by the end of that first day of that pilot, you go back to your hotel room and you’re in tears. You think you’re going to be fired; you don’t know how to do this.

“Four seasons on, Nandor is my happy place,” he added. “Playing him, doing his voice, wearing his clothes, speaking his lines, it feels like slipping into a warm bath.”

Laura Montgomery, also an Emmy nominee, plays a big role in getting Novak to his happy place when creating the costumes for the series, which she says are inspired by the scripts.

“I’ll get the script and obviously it was a dream come true in Season 4 that Nadja (Natasia Demetriou) opens a nightclub,” she said. “That just opened the door for some amazing costumes. We don’t want to stray too far from what the characters are; it was great in Seasons 3 and 4 to delve into Nandor’s backstory. I hope I’m doing him justice.” Jeff Goldblum Shares His Hopes For Season 3 Of...