Aaron Judge came up just short of history on Thursday. He’ll get another chance on Friday.

The Yankees outfielder, needing just one home run to tie Roger Maris’ franchise and AL mark of 61 home runs, brought the fans out of their seats in the bottom of the ninth inning. In his final-at bat of the series opener against the rival Red Sox with the game tied 4-4, Judge sent a ball to the warning track for a 404-foot fly out. The Yankees did earn a walk-off win in the 10th inning and clinched a playoff berth, but Judge — 0 for 2 with three walks on the night — finished the night sitting on 60 homers.

For the second game of the final Yankees-Red Sox series of the season (7:05 p.m. ET), Judge will face off against veteran Rich Hill at what will likely be a raucous Yankee Stadium crowd with the record book waiting to be rewritten.

In a twist, the game will only be carried by Apple TV+ and not a regional or national TV network.

Here’s what you need to know ahead of the game:

How to watch Yankees-Red Sox on Apple TV 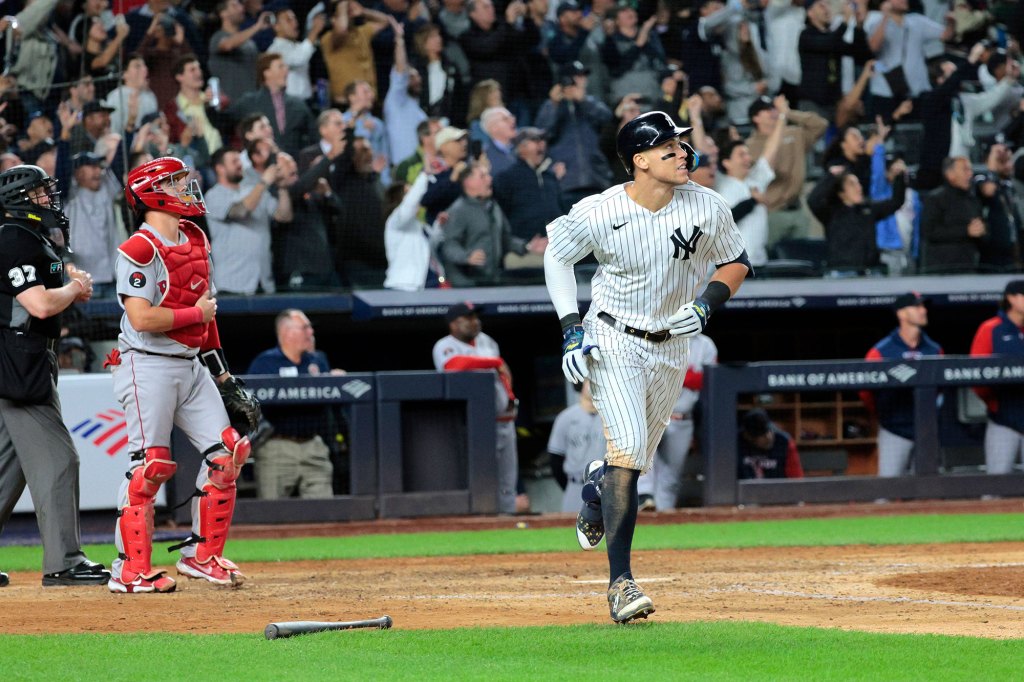 Apple has made its Friday night games completely free, and Yankees-Red Sox is no exception — all you need is a free-to-create Apple ID for access.

Who will call the game?

According to The Post’s Andrew Marchand, YES Network, unable to get MLB to move the game off Apple TV, offered its broadcast crew of Michael Kay, David Cone and Paul O’Neill plus production support to Apple. As of Thursday night, that offer had been declined.

After these games against Boston, the Yankees will travel to Toronto for a three-game set that could see the Yankees wrap up the AL East before they finish the season off with series against the Orioles and Rangers.

After going 0-for-2 with three walks against the Red Sox on Thursday, Judge sits one home run shy of Yankees legend Roger Maris for the franchise and American League record of 61.

While many recognize Maris’ mark as the untainted home run record, MLB’s official record belongs to Barry Bonds, who socked 73 dingers during the 2001 season.

Judge enters Friday’s game leading the majors in homers (60) and RBIs (128). He’s also atop the AL with a .316 batting average. If he can maintain his lead in all three categories — he’s unlikely to be caught in homers and RBIs — the 30-year-old will be MLB’s first triple crown winner since Miguel Cabrera in 2012.

“It is so exciting to see what he is doing, and the way he is absolutely dominating almost every offensive category this season,” Cabrera told ESPN this week. “I think his season is going to be remembered as one of the best in baseball history. I hope that Judge becomes the next Triple Crown winner, and I hope he wins the MVP.”