How to bet Jermell Charlo vs. Brian Castano rematch Jermell Charlo (34-1-1) and Brian Castano (17-0-2) will meet Saturday night in Carson, Calif., to decide the undisputed 154-pound champion. The bout is a rematch of a closely contested fight from last July that ended in a draw. BetMGM makes Charlo the -200 favorite, while bettors can get Castano +175 and the fight ending in another draw at +1600 (16/1).

The first time these two met, the three judges scored it 114-114 even, 114-113 Castano and 117-111 Charlo. Anyone who watched the fight knows the 117-111 for Charlo is a joke. I thought Castano earned a tight decision, but either way, the bout was razor close and that should be the case again in the rematch.

Oddsmakers aren’t expecting either fighter to win by stoppage. The odds of the fight going the full 12 rounds are -225. It makes sense considering neither fighter has ever been stopped in a combined 55 bouts. Four of Castano’s last six fights have gone to the scorecards, while 17 of Charlo’s 36 fights have ended in decision. Charlo is +125 to win on points, while Castano is +300. 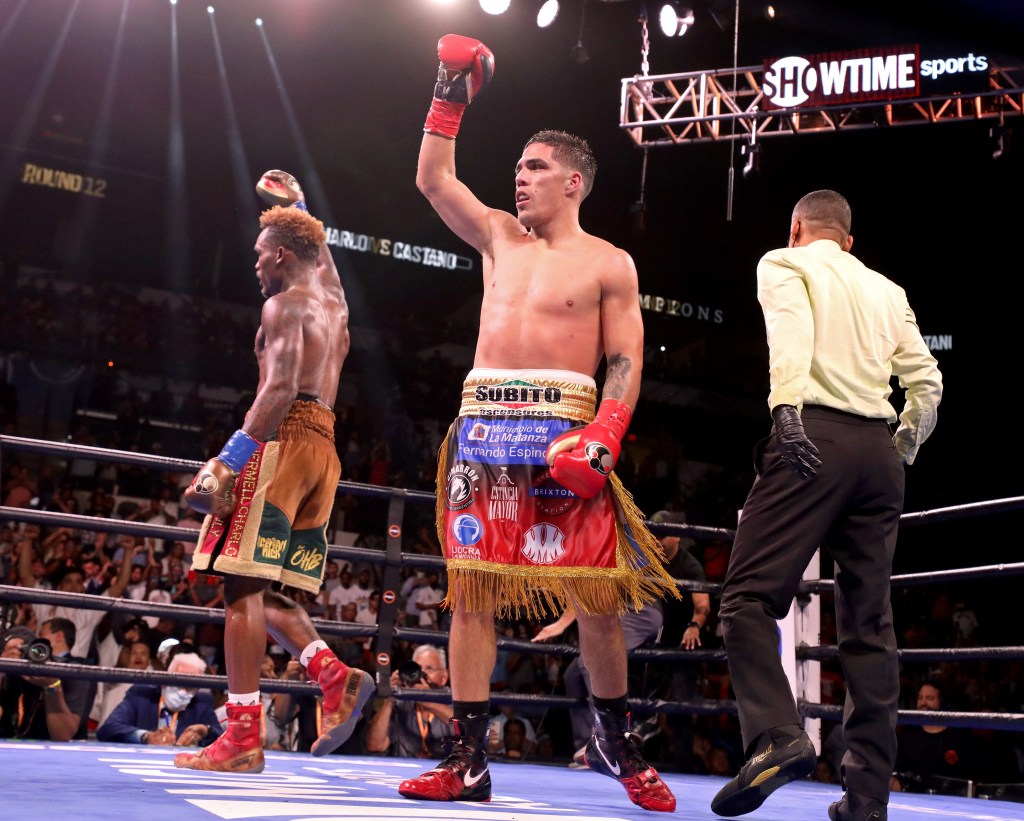 Both Jermell Charlo and Brian Castano believed they deserved to win the first fight. Getty Images

This line should be closer to even, so there is some value on Castano. Charlo is the more skilled fighter overall but Castano’s pressure really bothered him in the first matchup. Castano gassed out, however, and Charlo controlled the later rounds.

Castano is a pressure fighter who likes to start strong. The question is can he keep up that pace for 12 rounds against a fighter of Charlo’s caliber? Another thing to keep in mind is the rematch was originally scheduled to take place in March but had to be postponed because Castano suffered a biceps tear. That’s a tough injury for a boxer to recover from in just a couple of months.

This fight is a contrast in styles. Charlo wants to use his six-inch reach advantage to keep Castano on the outside. Meanwhile, Castano wants to apply constant pressure on Charlo and make the fight ugly. Both fighters had success in the first bout implementing their style and hurting their opponent.

In the first meeting, Castano landed 173 punches but only nine were jabs. The 173 punches are the most ever landed against Charlo, and Castano connected on 41 percent (164 of 400) of his power shots. Charlo threw 287 jabs but landed just 53 (18.5 percent). Charlo’s jab needs to be a bigger factor in the rematch or he’ll be in trouble.

Castano has two draws on his record and believes he won both decisions. The WBO light middleweight champion has vowed not to let this fight go to the scorecards, although that could leave him susceptible to a big shot. Castano isn’t known as a great defensive fighter and Charlo took advantage of that in the later rounds the first time they met.

Some analysts believe Charlo will make the proper adjustments this time and the betting odds have moved toward him. It will also be difficult for Castano to earn a decision in a close fight. That’s just the reality of boxing. Last Saturday, Dmitry Bivol dominated Canelo Alvarez but needed to win the final round to avoid a draw on all three judge’s scorecards.

I do like this matchup for Castano. The concern is he comes out with his hair on fire and then fades in the later rounds. Charlo got hit a lot in that first matchup, however, and I don’t see that changing. This will be another close, competitive fight. Castano is worth a look at anything +150 or higher.