Harry Styles’ Fall Season Is A Sign Of The Times: From Onstage Extrovert To Complex Roles In ‘My Policeman’ & ‘Don’t Worry Darling’ If anyone is having a great autumn, it’s Harry Styles.

His Love on Tour jaunt, now in its second leg, boasts a reported running total of $233.5M and it’s still running. It’s the type of tentpole cash that any motion picture studio would envy.

Breaking this down: The singer’s 15-night residency at Madison Square Garden in New York City, which ran from late August to late September, was an anomaly for the venue; the Grammy winner is one of three musical icons to pull off such a feat alongside Billy Joel and Phish. Styles is currently in the throes of another 15-night residency at the Kia Forum in Inglewood, CA.

Styles’ MSG dates together with his six sold-out shows at Moody Center in Austin, Texas have grossed in excess of $76M, not that far from the $85M worldwide running gross of his New Line genre pic Don’t Worry Darling, in which he co-stars. Don’t Worry Darling hits Japan on Nov. 11, moving that pic even closer to a near-century mark global gross. 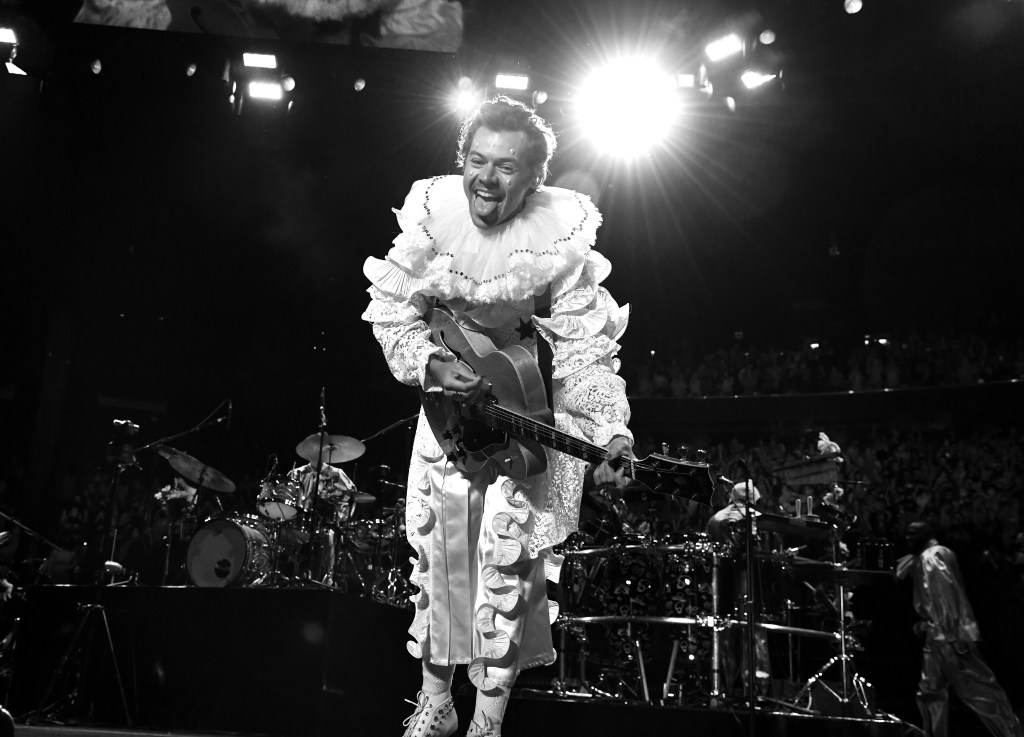 And talk about an incoming Styles vortex on streaming in the days ahead: On Friday, the pop icon’s Amazon Studios movie My Policeman finally hits Prime Video with Don’t Worry Darling debuting on HBO Max on Monday Nov. 7. Don’t be surprised if either OTT services declares some sort of viewership record.

While live performances are the meat and potatoes of the Styles’ machine, a new horizon for the Redditch, Worcestershire, UK native includes his box office prowess. The fact that he helped pull in 73% women of all ages and minted a $19.3M opening for Don’t Worry Darling wasn’t lost on any major studio executive in town. They’re savoring on how they can best that figure by pairing Styles with the right IP moving forward. 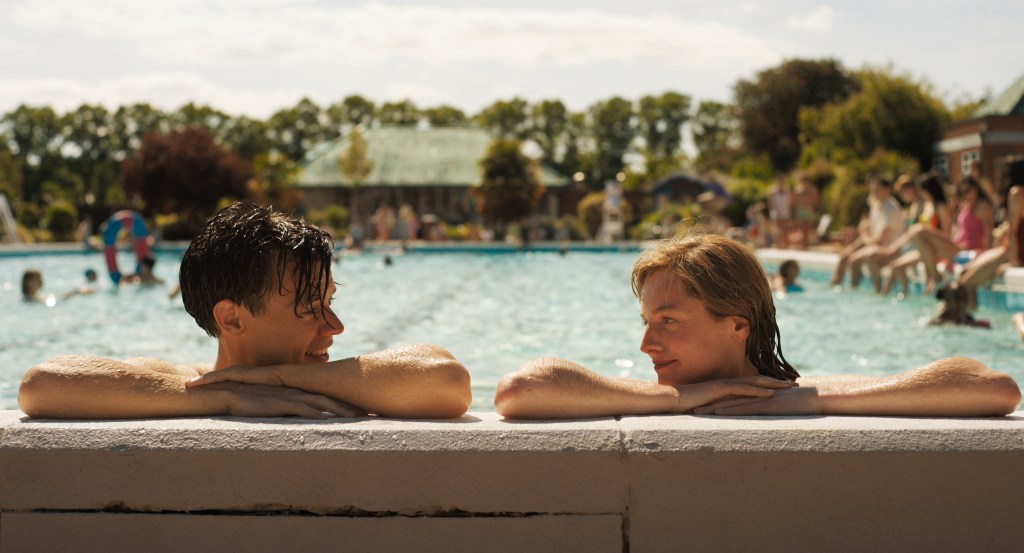 And while Don’t Worry Darling alone brought an arsenal of tabloid headlines (they say there’s no such thing as bad publicity), not to be overlooked is Styles’ process and serious intent for the next chapter of his acting career. Quite often it’s assumed that pop icons merely raise their hand and get the part. Or simply ease into a role, read: Madonna in one of her first big screen outings, Desperately Seeking Susan, playing a character quite similar to her onstage persona.

But much like his concert work, there is a great degree of sweat involved in Styles’ landing of parts going back to Christopher Nolan’s Dunkirk. On set, sources tell us Styles is so intense, he’s the type of actor who memorizes other castmembers’ lines in a scene. For his turn as the beached soldier Alex in Dunkirk, Styles went through several rounds before he landed the part of one of the soldiers on the beach; Nolan wanting a group of unknown face actors (the 5x Oscar nominated filmmaker was reportedly unaware of the extent of Styles’ fame at the time of casting).

When it came to the Elvis audition, it started out with filmmaker Baz Luhrmann phoning Styles up. Casting knew Styles could sing and dance; reportedly the first song the singer ever recorded was Elvis Presley’s “The Girl of My Best Friend” on a karaoke machine. However, what impressed Warner Bros suits was how much vulnerability he brought to the role. “He’s a sponge and has a keen sense of curiosity,” says a close associate of Styles about what he brings to his prep. “He’s a relentless, insatiable watcher of films, everything from the present and past.”

Luhrmann wound up going with Austin Butler for the title role, telling the Australian radio podcast “Fitzy & Wippa” that he passed on Styles because “He’s already an icon.” 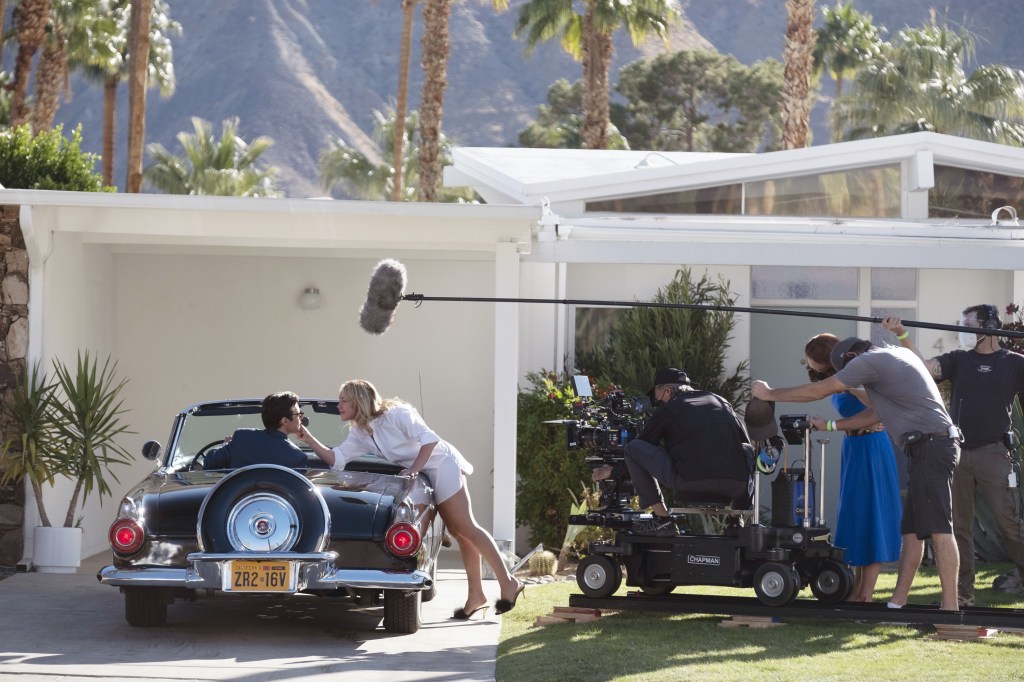 “Usually, it’s very hard for them to shed their onstage persona,” Emmerich continues, “Once in a while, you come across a true rock icon that is just a gifted actor.”

Other names that come to mind include David Bowie, Mick Jagger and, in the pop realm, Frank Sinatra.

“They can disappear into a role and you see the character, not the rock star,” says Emmerich. “That was the case with Lady Gaga in A Star Is Born and that’s what Harry Styles did in his Elvis audition, and why he came to top of mind for the role of Jack in Don’t Worry Darling.”

Sure, Styles could have focused on much broader fare that came his way, sources tell us. There were romantic comedy and action movie offers. However, he specifically settled on complex parts in edgy projects, like being a 1950s husband whose hiding something more sinister from his wife in Don’t Worry Darling and essaying a London police officer who is forced to hide his homosexuality in the late 1950s set My Policeman.

“He’s not an actor who wants to play it safe, rather challenge himself,” says another studio insider. 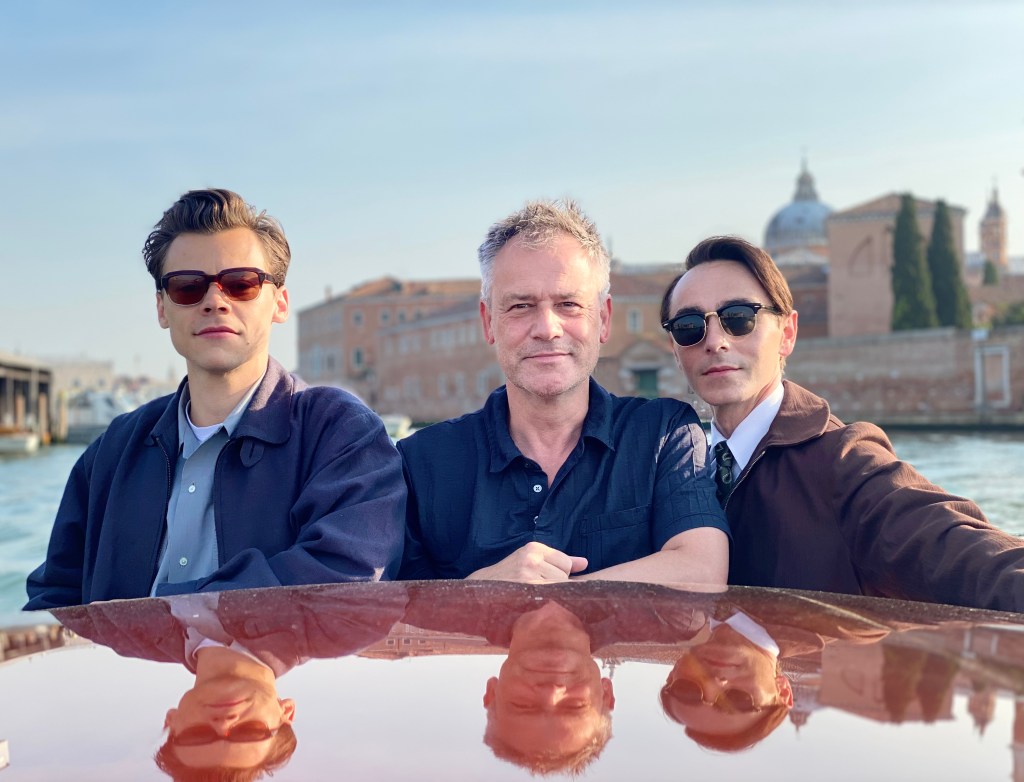 Adds My Policeman director Michael Grandage, “One thing Harry Styles has is an incredible level of self-knowledge, which is helpful about who he is and where he sits. In the respect of his development as a career, as an actor, he knew he was somebody who needed to gain experience. It was really about through which roles did he gain it.”

The appeal of Don’t Worry Darling for Styles stemmed from its feminist theme of a woman’s determination to discover her own sense of independence; a message which would easily resonate with his fanbase. He was also in awe of the pic’s visual nomenclature which had been meticulously created by Cooke and her production design team, and how he as an actor he could fit into that sphere.

“The character is wearing a mask for a lot of the story, and Harry vacillated between the confidence and unease of that dynamic so delicately and purposefully,” says Don’t Worry Darling screenwriter and producer Katie Silberman. “He approached the character, and the whole story, with so much empathy, and that’s the best kind of person to collaborate with.”

But Styles provided an extra bonus on Don’t Worry Darling.

Silberman explains, “We had written a ‘TBD catchy and recognizable melody’ to be stuck in our main character Alice’s head throughout the story, and we were extremely lucky that Harry wrote a legitimate earworm that did exactly what we’d hoped it would.”

We’re specifically talking about the film’s tune “With You All The Time” which wound up being the pic’s theme song in its trailers and TV spots.

“But beyond the melody, I was most impressed that he wrote a song that captured the character so well,” she adds, “It was amazing to have a collaborator who was a wonderful storyteller in his own right, and who brought that to every element of the process.”

In regards to the small British movie My Policeman, Grandage was surprised to receive a phone call from Styles’ agent. Styles wasn’t even top of mind for the project when Grandage was putting it together. The film tells the story of a love triangle in the late 1950s when homosexuality was illegal in the UK, between a gay museum curator, the married police officer he loves, and the latter’s wife, as well as the relationship’s ramifications forty years later.

You can listen to our full Crew Call conversation with Grandage here:

“On this occasion from Harry’s team, they said we passed this script to him because he is looking for another movie, he really responded to the material,” recalls Grandage.

“It was a very inspiring meeting for me. You probably know but most of the time a director is in a room trying to convince an actor to be in a film. So, it was really interesting being in a room with somebody who had read the novel at least once, I could tell, read the screenplay multiple times, and was talking intelligently about what they wanted to bring to the role of Tom,” exclaims Grandage about Styles. 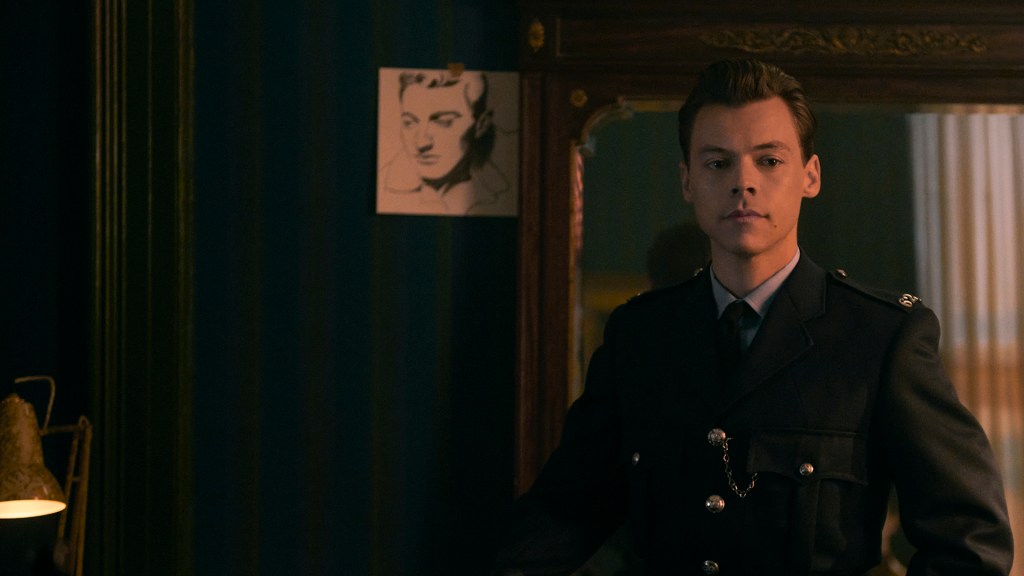 Why the role of Tom?

Grandage says that Styles was drawn to the part as it entailed him “playing a complex character of somebody who couldn’t really express their emotions.”

“Somebody who was hidden behind themselves almost. Somebody who had almost emotionally shut themselves down from the people and the world they’re in because he was a policeman in a society where it was illegal to be gay. So, basically what do you do in that situation? You pull your card very, very close to your chest and give absolutely nothing away,” adds the director.

“So, he was intrigued about playing an inner life rather than an outer life. That interested him. He was interested in playing something internal where very little was given away. In fact, so little was given away, both (characters) Marion and Patrick found it difficult to read him. That’s the point of the character. The only other point of the character is that you, the audience, have got to believe why two people fell in love with him. So, if they didn’t fall in love with him because of his personality giving stuff out, they must have just fallen in love with him because he’s incredibly beautiful and charismatic to look at. So, a combination of those two factors was something Harry understood straight away. He said the inner life of this character is so interesting because the outer life is sort of shut.”

“I thought, ‘You get him. You completely get him,” says Grandage.

But beyond a mere acting feat, My Policeman meant an even greater deal to Styles as it’s a film that spoke directly to his LGBTQ fanbase. For Styles “being able to connect with (them on) a story that would genuinely mean something and connect and help people understand what it could be like if you start rolling back laws,” emphasizes Grandage.

“That was also incredibly important to him,” adds the director, “being involved in a movie that may well help be part of a bigger debate.”

Styles was engaged in three full weeks of rehearsals before shooting My Policeman.

Says Grandage about working with Styles and the cast, “I wanted all of those discussions, all the rehearsal, even the staging, particularly the intimacy stuff. I wanted all of it to happen in advance. I wanted all of us to have really discussed in some depth about what we wanted to get from the scene, even backstory, coming to the scene, where we’re going.” 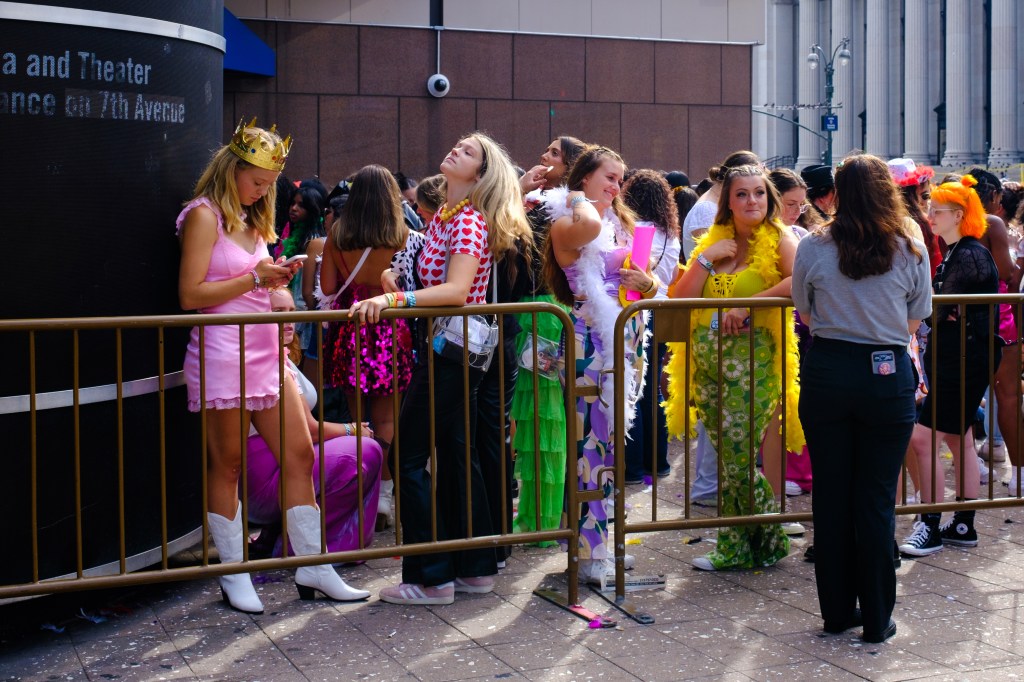 Styles hasn’t selected his next feature project yet, sources tell us as he remains busy with Love On Tour into July 2023 with stops such as Sao Paulo, Sydney, Munich, Paris, London, Rome among others. This despite his big tease as Thanos’ brother Star Fox in the epilogue of Marvel’s Eternals last fall.

Until then, thousands of his devotees will continue to line up in feathers and sequins for the next nine months, no matter how many miles they have to travel to see him.

Says a close associate of Styles about the pop icon’s magnetism, “When someone jumps in a car and drives hours across the city to see him, Harry’s in it with them.”