You did not have warm and fuzzy feelings about that game?

You listened to the Giants and Commanders express how much their 20-20 tie made them feel like they had lost. Neither team was happy with it.

Well, someone liked what went down, which is why the NFL flexed the Week 15 rematch at FedEx Field to “Sunday Night Football,” exposing a national television audience to what is shaping up to be a playoff play-in game.

The odds are high that the Giants lose to the Eagles on Sunday and fall to 7-5-1. The Commanders will definitely be 7-5-1 when they next take the field, as they are on their bye week. The odds are high that either the Giants or Commanders, but not both, will make it into the playoffs. So, essentially, the first tie game for the Giants in 25 years was not helpful, as far as their standing in the NFC, but the second meeting with the Commanders was always going to be the one that held the greatest significance.

“I’m not sure,” safety Julian Love said on Monday when asked how the tie affects the playoff chase. “Usually I’m pretty analytical and kind of understand all that stuff but I’m not fully sure of the full breakdown of these last five games. I just know there’s some wins out there we need.” 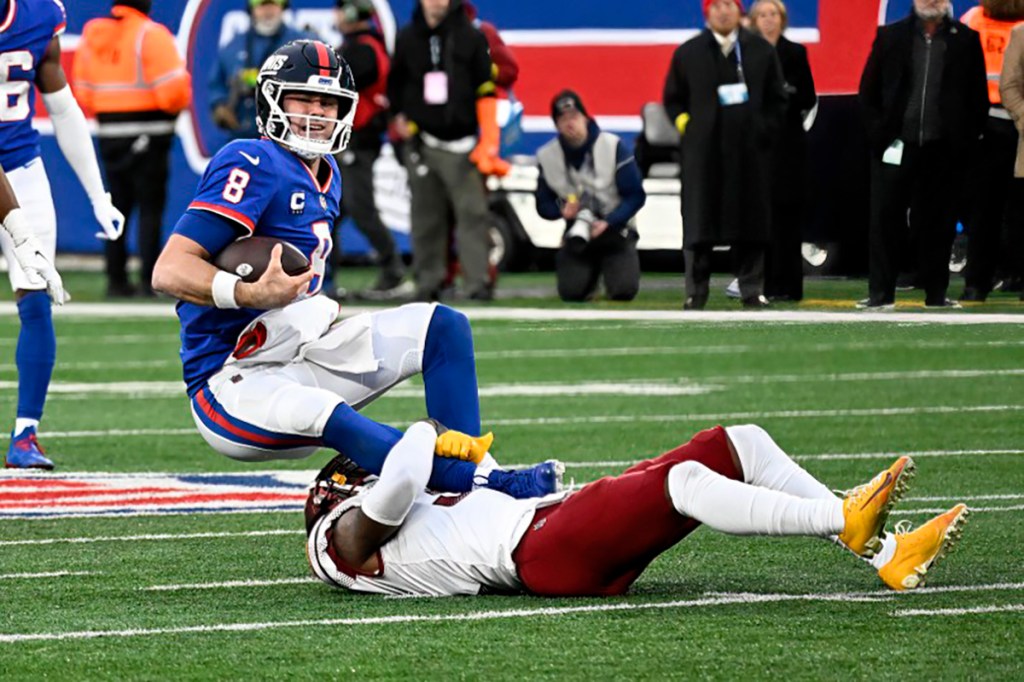 Daniel Jones and the Giants still have a lot of winning to do to make the playoffs.Bill Kostroun

Of that there is no doubt.

According to FiveThirtyEight, the Giants at present have a 50 percent chance to make the playoffs. If they are able to upset the 11-1 Eagles, that percentage rises to 76 percent. If they lose to the Eagles, the percentage drops only to 41 percent. If the Giants lose to the Eagles and then beat the Commanders in the rematch in two weeks, the Giants’ chance to make the playoffs is 62 percent.

The tie was bad but not terrible. The Giants have another shot at the Commanders and so they control that situation. The tie was harmful to the Giants when it comes to their placement in the NFC alongside the Seahawks. At present, the Giants are the No. 6 seed and the Seahawks (7-5) are No. 7. The Giants lost in Seattle 27-13 and so they do not own the head-to-head tiebreaker with the Seahawks. Of course, the tie game makes it unlikely tie-breakers will come into play, unless there is another tie game in the conference involving teams fighting for postseason berths. The Giants also lost to the Lions (5-7), but coach Dan Campbell’s team has a great deal of winning to do to enter into the picture.

According to FiveThirtyEight, the Seahawks have a 79 percent chance to make the playoffs. The Commanders are at 69 percent and the Lions are at 8 percent.

What complicates the next five weeks is that four of the next five games are against teams either virtually assured of a playoff spot (Eagles twice and Vikings) or against a team in a dogfight to get in (Commanders). The only game against a non-contender comes in Week 17, when the Colts play at MetLife Stadium. Judging from the way the Colts fell apart in their 54-19 tank job to the Cowboys — it is not easy to give up 33 points in a fourth quarter, but the Colts did it — this should be the only soft touch for the Giants.

That the Giants have two games remaining with the Eagles, the team with the best record in the NFL, is the reason why the Giants own the second most-difficult remaining schedule in the league, behind only the Bears. The only possible break for the Giants is if their Week 18 game in Philadelphia means nothing to the Eagles — it is likely they will have clinched the No. 1 seed in the NFC before then — and coach Nick Sirianni decides to rest several of his key players for the postseason.

“You just got to get ready to play the next week and the next team,” coach Brian Daboll said. “For us, it’s the best team in the NFL right now; one loss. They lost to Washington. They have a star-studded roster. I think [Philadelphia Eagles general manager] Howie [Roseman] has done a great job of putting together a bunch of talent there on that team. [Quarterback] Jalen [Hurts] is playing phenomenal. Those receivers, they’re exceptional, O-line, defensive line, corners. They’ve got a star-studded cast. 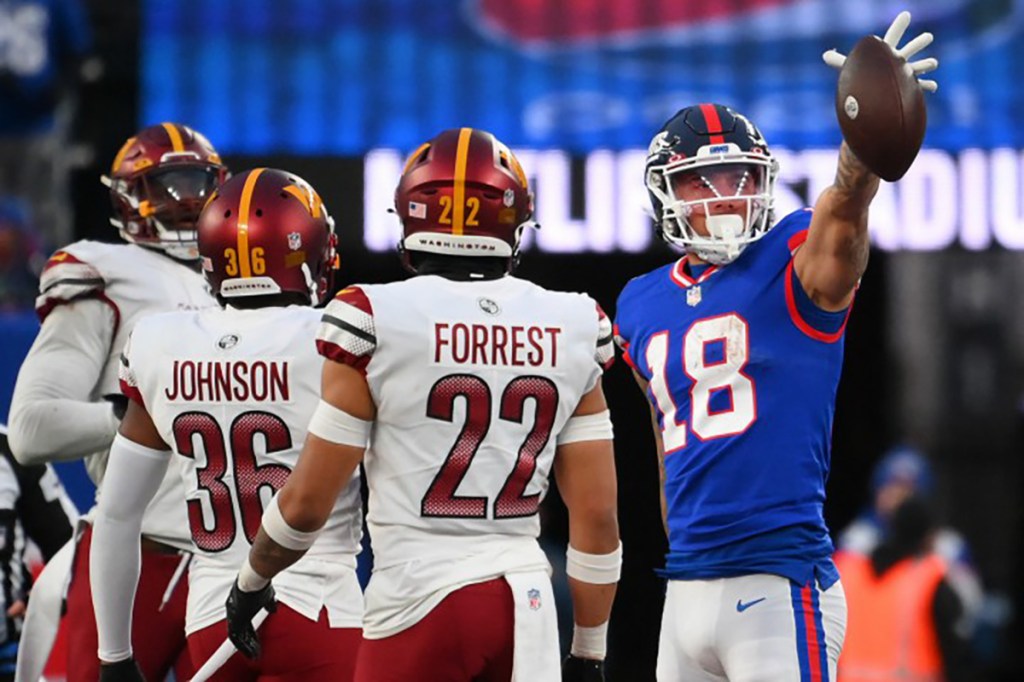 Isaiah Hodgins reacts to a first down catch against the Commanders.USA TODAY Sports

“So, our focus will be on Philadelphia, again against a team that’s pretty much run through everybody. And I think that’s plenty for us to focus on.” Brian Daboll has plans to deal with disgruntled...