Brian Daboll paused to collect his emotions as the image of Tua Tagovailoa lying on his back with his hands frozen in the air replayed in his mind.

The scary scene of the Dolphins quarterback getting carted off the field Thursday night after suffering a concussion raised questions about whether he should’ve even been on the field only five days after his head was slammed into the turf and he stumbled getting to his feet in Miami’s previous game. It resonated strongly with Daboll, who was the offensive coordinator for Tagovailoa during Alabama’s national-championship-winning 2017 season.

“He means a lot to me,” Daboll said in a solemn tone Friday. “Special kid, great family, and it was tough.”

The Dolphins said that Tagovailoa cleared the NFL’s concussion protocol, but the NFLPA and many current and former players were outspoken that the team jeopardized Tagovailoa’s personal safety. Ravens head coach John Harbaugh said it was “astonishing” and he “couldn’t believe” what he saw Thursday or even last Sunday, when Tagovailoa reentered the game against the Bills. 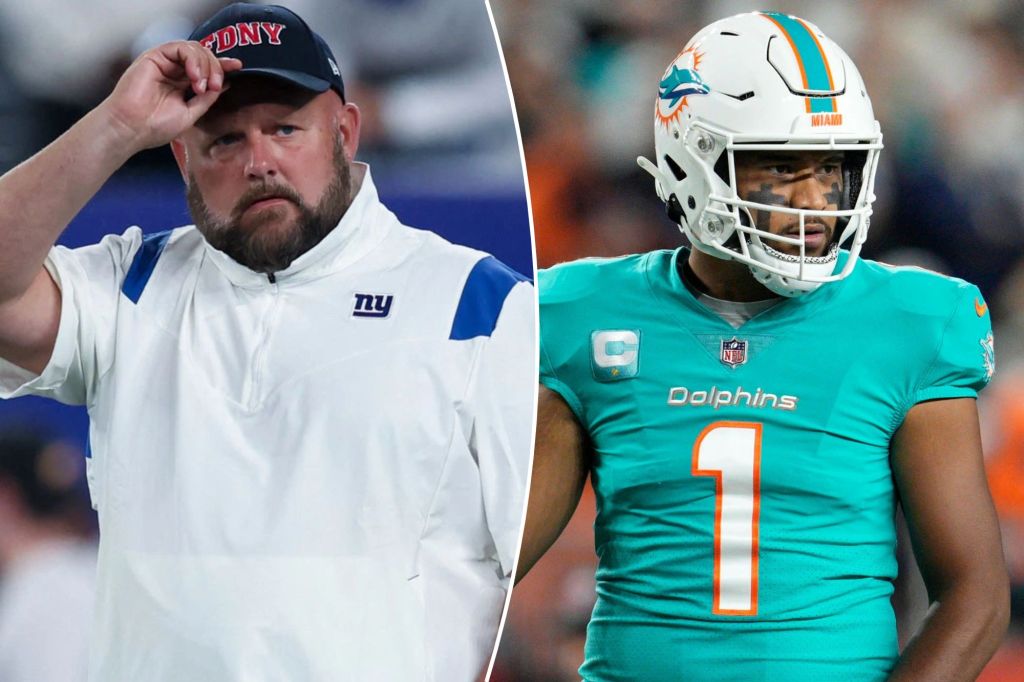 Giants safety Xavier McKinney, who said he has never suffered a concussion, was a star on that 2017 Alabama team and has some concerns about how his former teammate was handled by the Dolphins.

“I’d be lying if I said I didn’t,” McKinney told reporters after practice. “But at the end of the day, I don’t really know what’s going on with that organization.”

Daboll plans to check in with Tagovailoa, but hasn’t yet out of “respect for him, his family, their space.” Like the Dolphins’ Mike McDaniel, Daboll is a first-time head coach. And head coaches are in charge of coordinating with the medical team regarding who is cleared for practice and game participation. Will he think twice now about being more careful?

“I think every decision is different,” Daboll said. “I don’t really think about them as players. I know I’m a coach, but … they’re not too far off from my kids. Anytime a guy gets hurt, just prayers for him, his family and the people around him.”

During his year at Alabama, Daboll also recruited quarterback Justin Fields, who will start Sunday for the Bears against the Giants. Fields ultimately committed to Georgia and transferred to Ohio State, while Daboll moved on to the Bills.

“He was an impressive, impressive player,” Daboll said. “We went and watched him, had a chance to meet with him when he came up on a visit [with] his family.

“I have a lot of respect for him. He’s a good, young quarterback, and I think he has a bright future.”

DL Leonard Williams’ streak of 114 straight games played to start his career ended last week, and he also has been ruled out for Sunday. Williams often jokes that he has “tiger blood” and is “like Wolverine” because his sprained MCL is healing quickly.

“I’m going for longevity over short-term gains,” Williams said. “Little does he know that [former left tackle] D’Brickashaw Ferguson was a vet when I came into the league with the Jets. Never missed a game [in 10 seasons]. That stuck with me and even though he probably never talked to me or knew I held onto that, it’s been a part of me since knowing that about him. I’m glad I’ve been able to make it this far.”