The depleted Giants gave it a shot Thursday night but there would be no Thanksgiving festivities for them. They battled as hard as they could and took a 13-7 lead into halftime but did not have enough on either side of the ball to hold off the mistake-prone Cowboys. The second half could be entitled Domination Dallas as the Giants wilted and left AT&T Stadium on the wrong end of a 28-20 score.

The Giants scored their only points of the second half with eight seconds left on Daniel Jones’ 1-yard touchdown pass to Richie James, making the final score look closer than the game actually was.

It all came crashing down on the Giants and yet the Cowboys were so sloppy that it took them far too long to turn this into a comfortable margin. 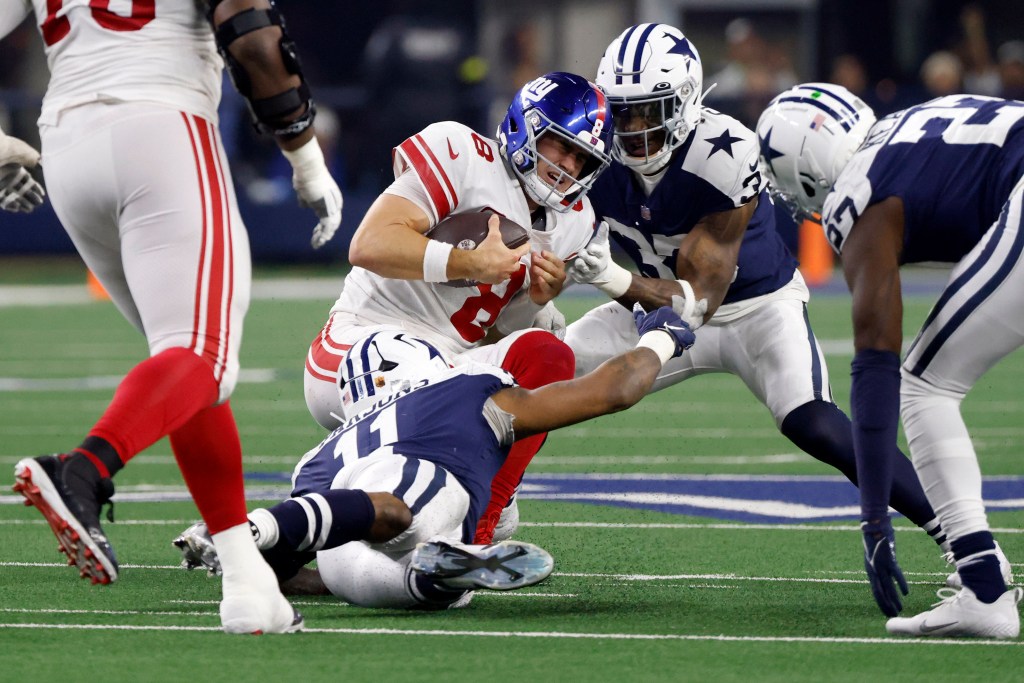 Daniel Jones is tackled by Micah Parsons (No. 11) and Damone Clark during the second half of the Giants’ 28-20 loss to the Cowboys.AP

The Cowboys (8-3) got the ball and held it for more than half of the third quarter on a 14-play drive. Still, the Giants were in good shape to limit the damage to a field goal but on third-and-goal from the 15-yard line, tight end Dalton Schultz beat fill-in cornerback Nick McCloud for a touchdown. Just like that, the Giants were down 14-13.

Next, coach Brian Daboll gambled on fourth-and-1 from the Giants 45-yard line, turning down a punt to try to pick up the first down with his offense. Jones’ hurried pass to the right side was low and behind Saquon Barkley, but the ball hit Barkley in the hands as he was falling backwards and he failed to catch it.

The Cowboys took over in Giants’ territory and embarked on a touchdown drive, with Dak Prescott hitting Schultz again to make it 21-13. The Giants’ offense fizzled again and Prescott found tight end Jake Ferguson for 24 yards — Ferguson leaped over safety Jason Pinnock — and found CeeDee Lamb for 23 yards before rookie tight end Peyton Hendershot scored from 2 yards out to seal the deal. 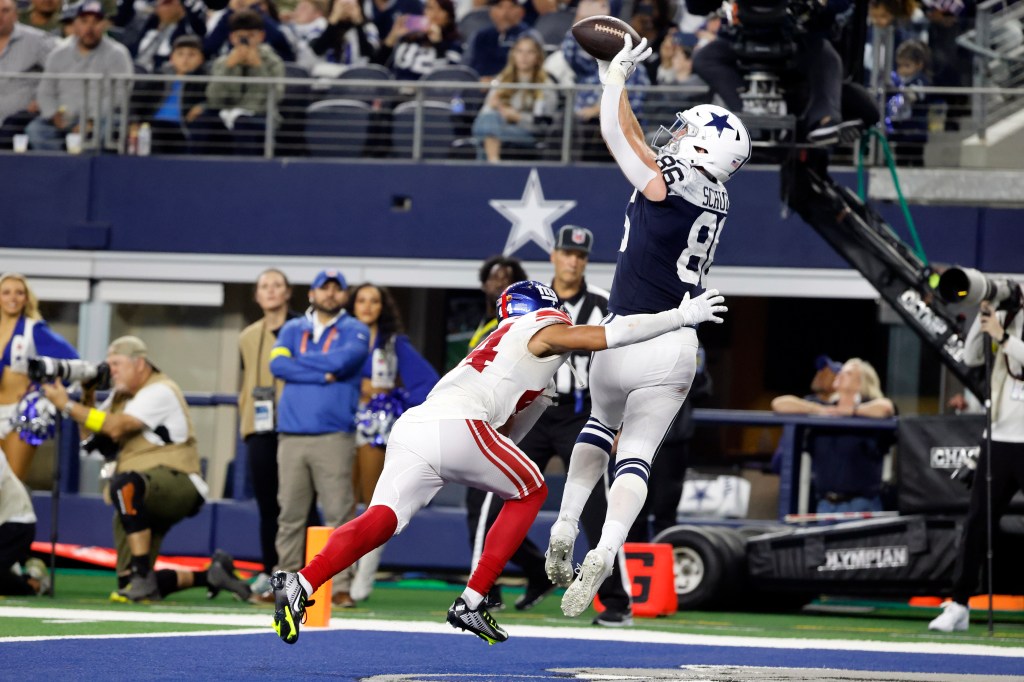 Dalton Schultz beats Nick McCloud and catches a touchdown during the Giants’ loss to the Cowboys.AP

This was a complete offensive meltdown in the second half. The Giants were held scoreless until the final moments, as they again failed to get Barkley established in the running game. Jones was reluctant to use his legs and there were no answers in the passing game.

The Giants were in it for a half. They intercepted Prescott twice in the first half, were boosted by a brilliant leaping 44-yard reception by Darius Slayton that set up their first touchdown and took advantage of seven Cowboys penalties to take a 13-7 lead into halftime. This was against a rival that overwhelmed the Vikings 40-3 four days earlier in Minneapolis, ending the Vikings’ winning streak at seven games.

The Cowboys have now won four straight in this rivalry and beaten the Giants 11 times in the last 12 games in what has been a lopsided series. 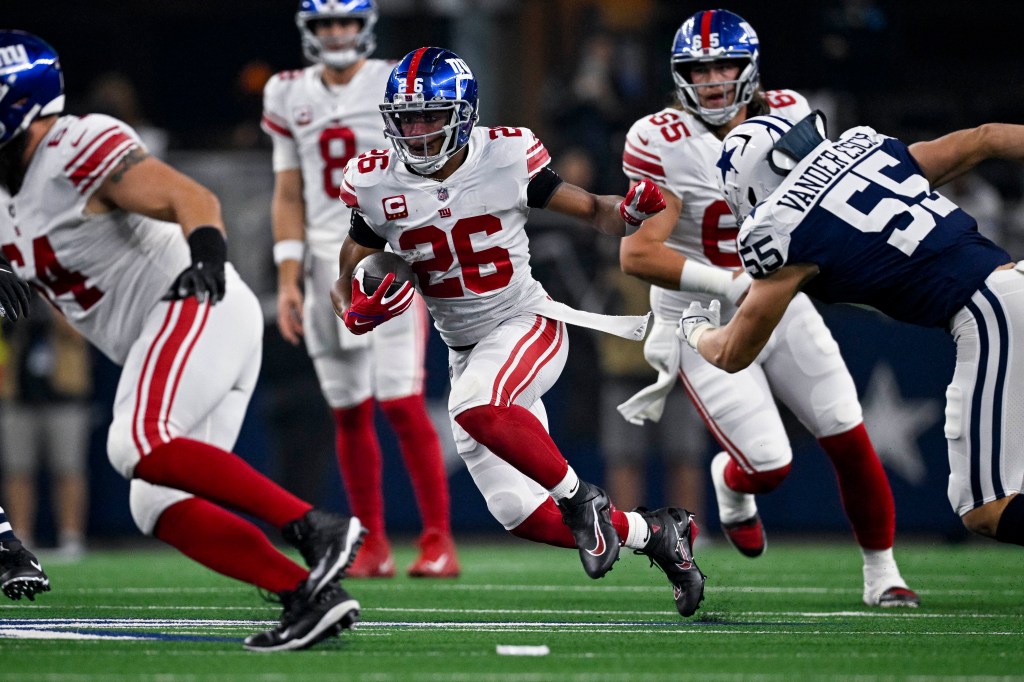 Saquon Barkley runs for a first down during the Giants’ loss.USA TODAY Sports

For the Giants (7-4), this is crisis point No. 1 in Daboll’s first season as a head coach. This is the first time this season the Giants lost back-to-back games and it was a rough way to open up a four-game stretch against NFC East opponents. The Giants are closer to the Commanders (6-5) and last place in the division than they are to the Eagles (9-1) and first place, as they fell further behind the second-place Cowboys.

This was going to be an uphill battle for the Giants, who four days earlier lost five starters to injury in the loss to the Lions. All seven of the players they designated as inactive for this game were out with injuries and all seven were starters. Their offensive line was filled with backups to backups, with only two regular starters, left tackle Andrew Thomas and right guard Mike Glowinski, manning their positions. 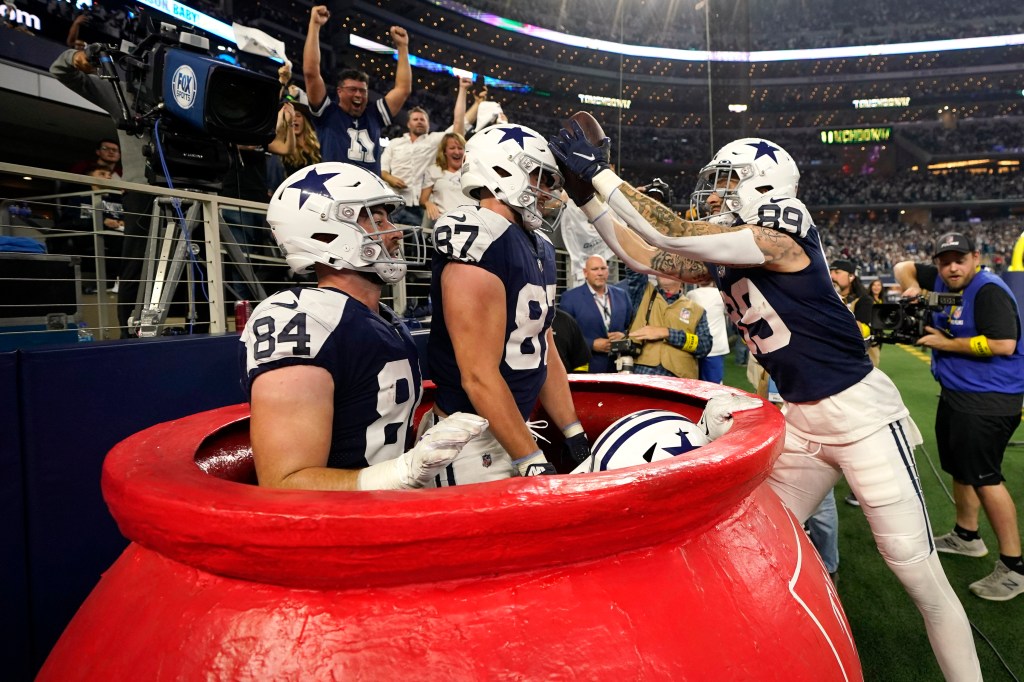 It was an even more precarious situation at cornerback, where the top three players (Adoree’ Jackson, Aaron Robinson and Fabian Moreau) were all out, leaving rookie Cor’Dale Flott and special-teamer Nick McCloud as the starters on the outside and Darnay Holmes in the slot.

It nearly was a dynamic opening series for the Giants, but they were called for three penalties to hurt their cause. One of them, Phillips getting flagged for being downfield illegally, wiped out Jones’ 24-yard touchdown pass to Isaiah Hodgins. If not for Graham Gano nailing a 57-yard field goal, the Giants would have come away empty.

Fill-in cornerback Rodarius Williams tiptoed the sideline for an interception of Prescott but the Giants couldn’t do anything with the turnover. The Cowboys converted three third downs on an 11-play, 93-yard drive capped by Ezekiel Elliott’s 6-yard scoring run on the first play of the second quarter to make it 7-3.

James reached out to make a high-degree-of-difficulty grab to convert on third down — the Giants had been 0 for 4 — and that paved the way for Slayton’s tremendous leaping catch up, over and around cornerback Anthony Brown for 44 yards to the Dallas 1-yard line. From there, Barkley ran it in and the Giants were ahead 10-7.

Gano’s 47-yard field goal at the halftime buzzer made it 13-7. Too bad for the Giants there was a second half to play. Undermanned Giants a team that needs to get...