One example of a zero-dimensional object is a geometric point. Another is the Giants’ offense when defenses take away Saquon Barkley’s legs.

It’s absurd that it took opposing defenses so long to figure out that stopping the Giants starts with containing Barkley when the passing offense around him is ranked No. 28 in the NFL, but a suddenly scuffling rushing attack has brought a once-promising season to a crossroads.

Barkley carried 11 times for 39 yards in a 28-20 Thanksgiving loss to the Cowboys, and it marked the third time in the last four games that he has been held to 53 rushing yards or fewer. It coincides with the Giants going 1-3 over that stretch.

“When the running game is not working, it starts with the running back,” Barkley said. “I’ve got to be better.” 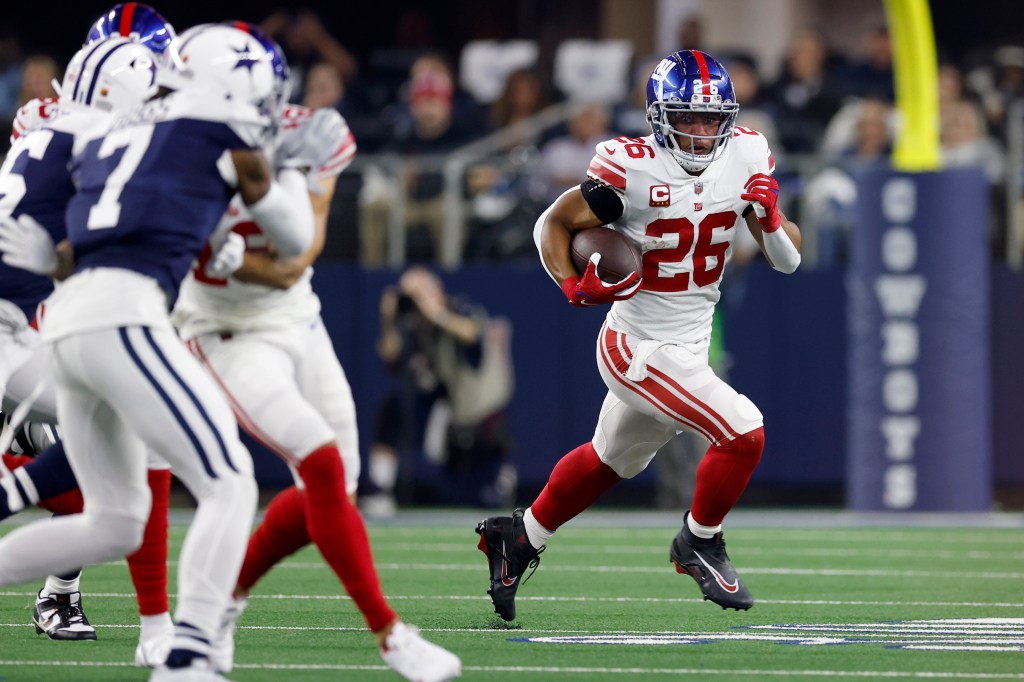 Saquon Barkley struggled in the Giants’ loss to the Cowboys. Getty Images

The Giants played Thursday with a left tackle (Andrew Thomas) who was fighting through an illness, their fourth different starting left guard (Jack Anderson) and their backups at center (Nick Gates) and right tackle (Tyre Phillips). Barkley’s longest rush was 10 yards.

“With the run game, everybody needs to do better,” head coach Brian Daboll said. “It’s not always going to be clean. There are going to be some 1s, some 2s [yards gained]. We’ve been missing some bigger plays that usually help in the run game. We just haven’t popped through there. The blocking, the running, the design, we have to do a better job all the way around with the run game. Coaching it, executing it.”

Darius Slayton’s 44-yard reception in the second quarter Thursday was the first Giants’ completion of the season that traveled more than 40 yards in the air, according to Next Gen Stats. It set up Barkley’s 1-yard touchdown run.

“We kind of felt like we could get down the field with a couple of play-actions, which we did in the beginning,” Barkley said. “We felt the run game was going to come later on, and we just didn’t get it going.”

The Giants have gotten away from their winning formula in back-to-back losses. Jones has attempted a season-high 44 and 35 passes while playing from behind in the second half. Jones was a nonfactor as a runner (three carries for 14 yards) after his dual-threat ability was a big weapon against the Cowboys in Week 3.

Barkley has played through an injured shoulder for the last six games. It is fair to wonder if the Giants’ overreliance on their one game-breaker — his 224 carries are second-most in the NFL and represent a pace that will shatter his previous four-year career high — is taking its toll. He rushed a career-high 35 times in the Giants’ one win over the last four games.

“Saquon is out there running hard, trying to do everything he can do,” Daboll said. “We just have to do a better job collectively.”