Batman fans are clamoring to own this iconic piece of movie memorabilia.

One of the most ridiculed costumes in movie history could soon be yours: George Clooney’s notorious “bat nipple” suit from Joel Schumacher’s epic 1997 flop “Batman & Robin” has just gone up for auction, with the starting bid set at $40,000. The form-fitting getup will be sold as part of Heritage’s Hollywood & Entertainment Signature Auction from July 22 to 23.

“This is easily the most famous — and infamous — Batman costume ever designed, as evidenced by the fact that all these years later, it continues to make headlines every time Tim Burton and George Clooney get asked about it,” Joe Maddalena, executive vice president of Heritage Auctions, told Variety in a statement. “But to his credit, Joel Schumacher never apologized for the ‘Bat-nipples.’ In fact, he once told Vice, ‘I’m still glad we did it.’

“And I am just as glad we have the chance now to offer this piece of cinema history to someone who can appreciate the costume as much as Schumacher clearly did,” he added. 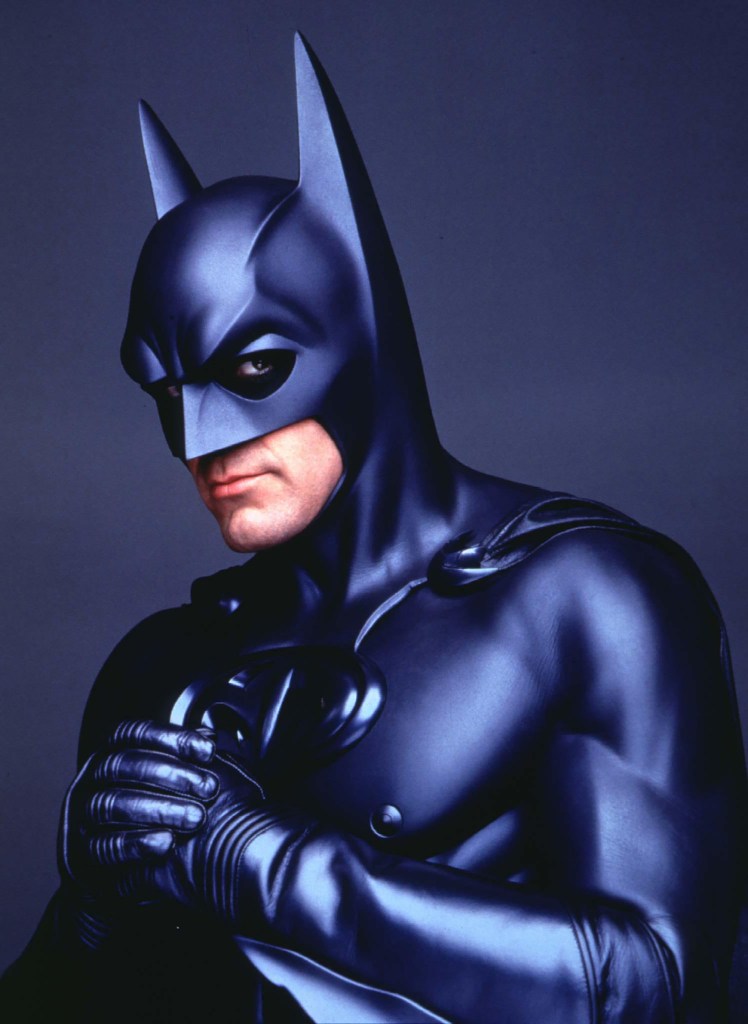 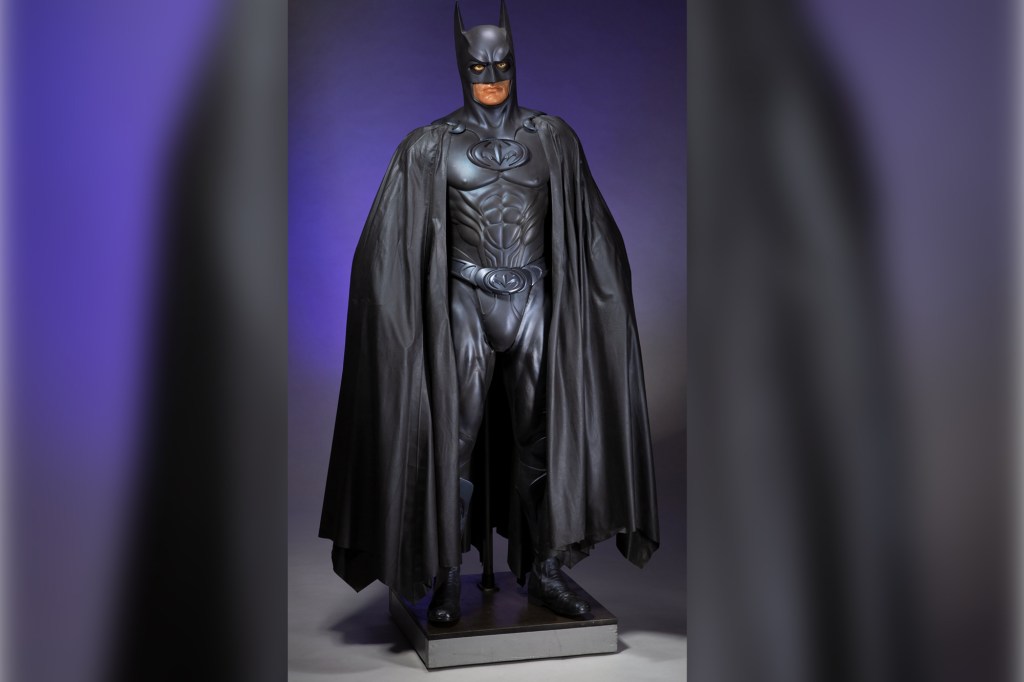 The buxom bat-suit, worn by Clooney, 61, in the Razzie Award-winning Caped Crusader film, is comprised of “cast foam latex, vinyl, resin components, leather, and other mixed media elements,” per the Heritage Auctions website.

The getup also comes with a “life-size, poseable mannequin” with a “hyper-realistic George Clooney head” and “prosthetic grade false eyes” — presumably so the “Ocean’s 11” star will be forever attached to the cinematic disaster.

Prospective buyers will be able to cast an opening bid on this sartorial laughingstock for the next 16 days before the auction closes. No word as to whether the auctioneers accept Clooney’s signature Bat Credit Card. 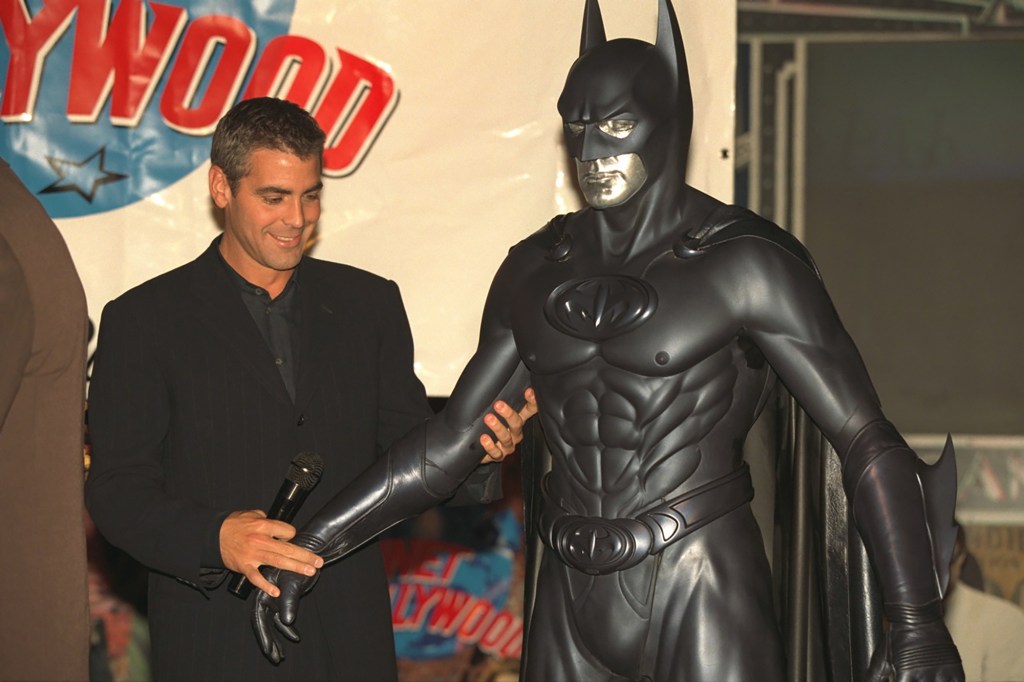 “This is easily the most famous — and infamous — Batman costume ever designed, as evidenced by the fact that all these years later, it continues to make headlines every time Tim Burton and George Clooney get asked about it,” said Joe Maddalena, executive vice president of Heritage Auctions.Sygma via Getty Images

The costume is one of several nostalgic Batman props up for auction, including Jim Carrey’s Riddler cane from “Batman Forever” and Jack Nicholson’s purple Joker suit from Tim Burton’s original 1989 classic “Batman” (the latter of which has an opening bid of $65,000).

Needless to say, the “bat-nips” have become somewhat of a punchline in cinematic circles. In a June interview with Empire magazine, original “Batman” director Tim Burton ripped the costume while discussing how the Dark Knight movies became increasingly campy following his 1989 classic.

“[Back then] they went the other way. That’s the funny thing about it,” Burton recalled. “But then I was like, ‘Wait a minute. Okay. Hold on a second here. You complain about me, I’m too weird, I’m too dark, and then you put nipples on the costume? Go f–k yourself.’” 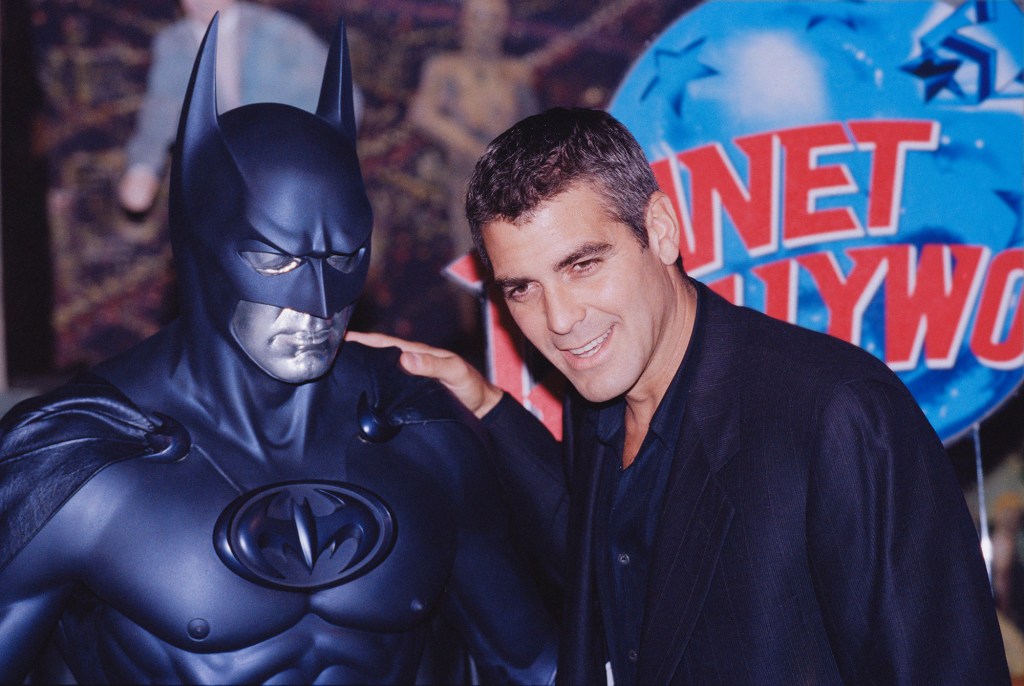 George Clooney poses with a model of Batman during a photocall for “Batman & Robin” at Planet Hollywood in London on June 23, 1997.Getty Images

Clooney himself, who has publicly bashed “Batman & Robin” in the past and even declared that he “f–ked it up so bad,” poked fun at the teat-tastic couture in a 2021 commercial for Omaze supporting Clooney’s Foundation for Justice. In the four-minute skit, the “Gravity” star goes on Craigslist to purchase a Batman action figure, which he specifies is “not the one with the nipples.”

“With Val Kilmer’s suit in ‘Batman Forever,’ the nipples were one of those things that I added,” the designer explained. “It wasn’t fetish to me, it was more informed by Roman armor — like Centurions. And, in the comic books, the characters always looked like they were naked with spray paint on them — it was all about anatomy, and I like to push anatomy.” 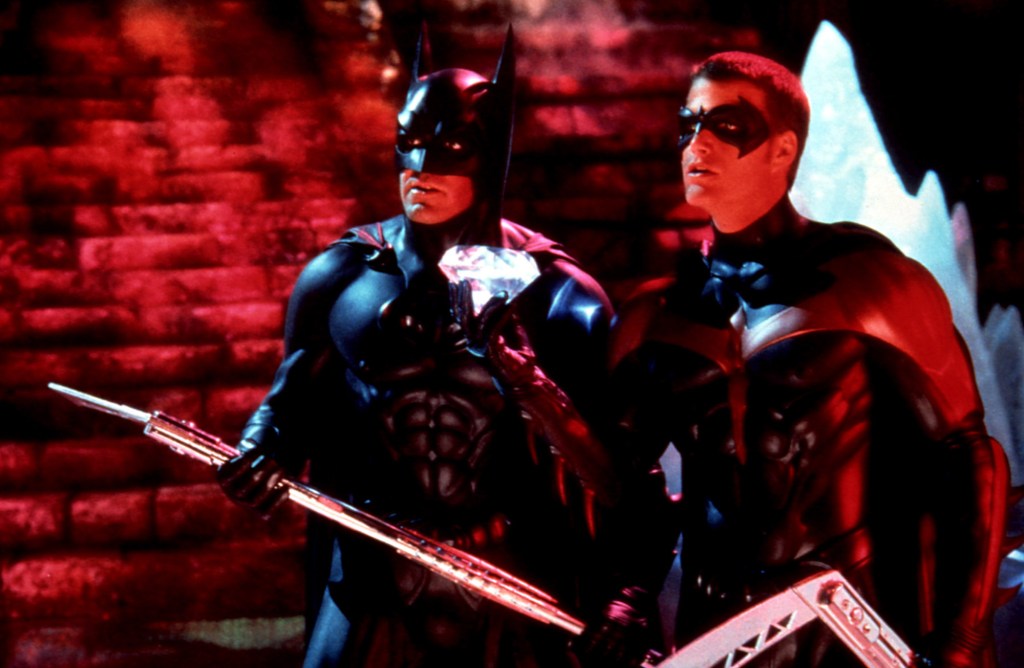 Fernandez added that he had “no idea there was going to end up being all this buzz about it.”

However, the costume creator ultimately blamed Schumacher for freeing the nipple. He explained that the director, who died in June 2020, loved the protrusions so much he decided to make them more pronounced in “Batman & Robin.”

“I didn’t want to do it, but he’s the boss, so we sharpened them, circled them and it all became kind of ridiculous,” the designer lamented.

When the first trailer for Matt Reeves’ “The Batman” dropped in August 2020, DC fans were divided over Robert Pattinson’s black eyeliner, which they dubbed deliciously “emo.” 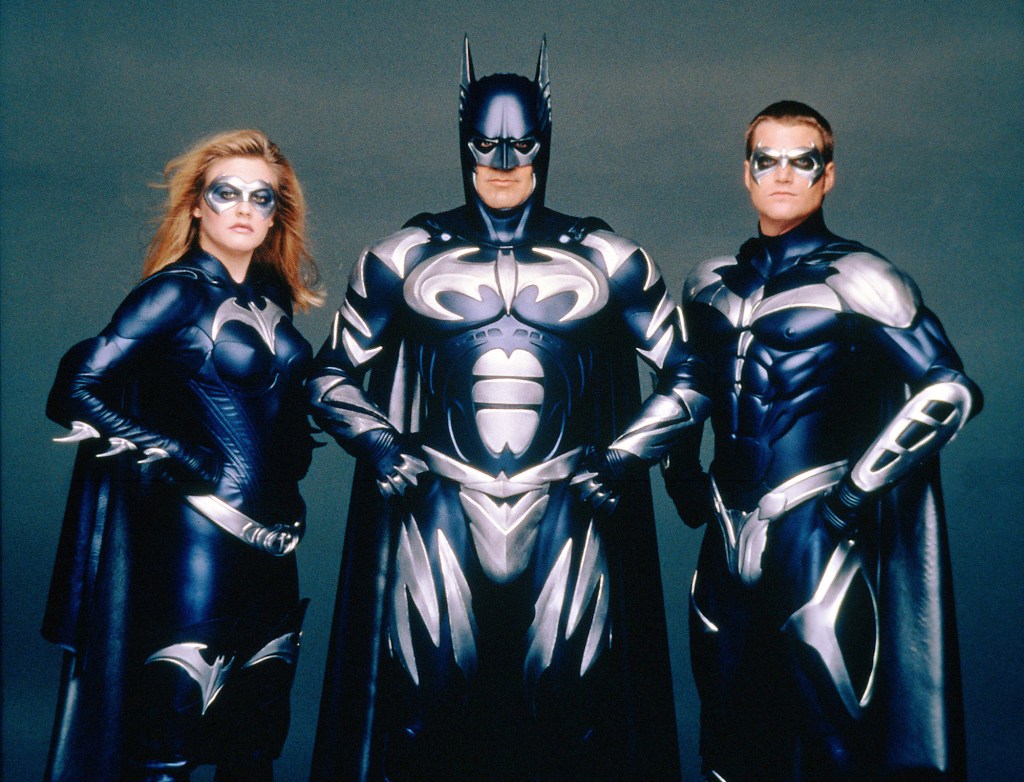 The director has since addressed the Caped Crusader’s macabre mascara in an interview with Esquire.

“You can’t wear a cowl and not wear that,” the 56-year-old “Cloverfield” director argued. “All of the Batmen wear that.”

Reeves was likely referencing the prior film iterations of the Dark Knight, who sport black cosmetics around their eyes to prevent a ring of pale skin from appearing inside the mask’s eyeholes. This eyeliner would then “magically” disappear when they removed the disguise. Nick Cannon danced for Kel Mitchell in a...