Johnny Depp has had a rollercoaster of a time since winning $8.35 million in his defamation law suit against ex-wife Amber Heard on June 1.

On the one hand, court documents unsealed this week revealed that his former lover Ellen Barkin said in a deposition that, during their relationship, he was “verbally abusive,” drank too much red wine and gave the actress a Quaalude the first time they had sex. His alleged erectile dysfunction was exposed, as were crude texts with Marilyn Manson.

Separately, Depp and guitarist Jeff Beck were accused of plagiarizing the poetry of a convicted murderer in a new song that they recorded together.

According to Castle Fine Art gallery in London — where the 780-piece show was mounted and sold out “almost immediately” — the wild interest came as a surprise. “I don’t think anyone was talking [ahead of time] about our website crashing or the work selling out in a few hours,” a gallery spokesman told The Post. 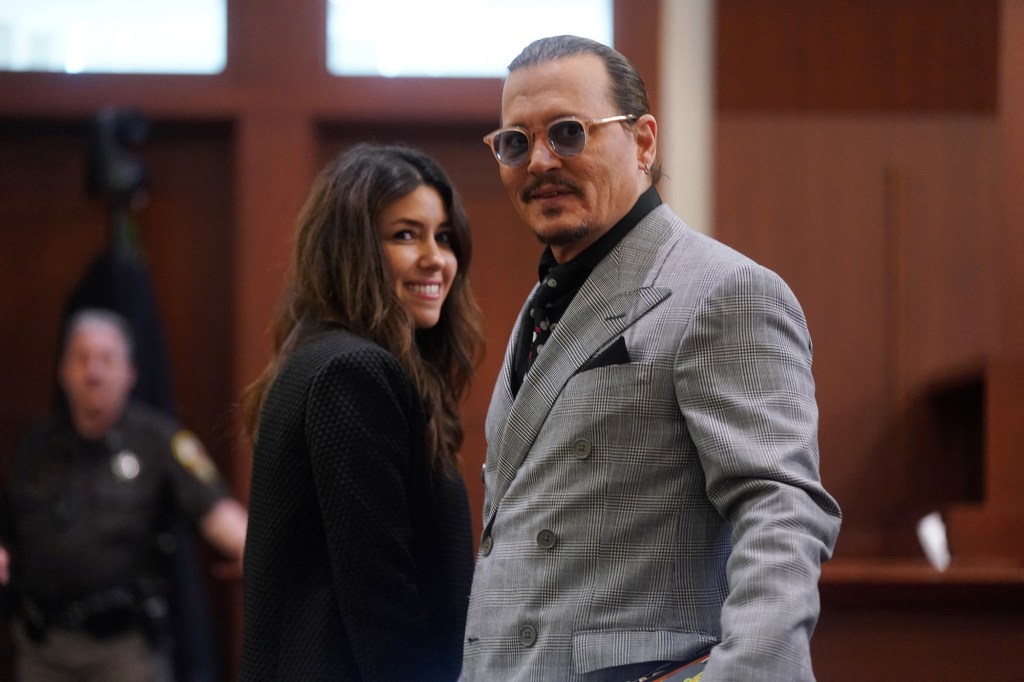 Since winning $8.35 million in his defamation law suit against ex-wife Amber Heard, Johnny Depp has kept busy at home and in Europe.REUTERS

“The trial may have put an accelerant on it because people think he is a hero,” a Depp insider told The Post. “But people have always bought into what Johnny does.”

Depp has also been basking in the onstage spotlight at concerts with Beck and his contract was renewed as the spokesmodel for Sauvage: According to the Wall Street Journal, as Depp’s trial wound down in June, Sauvage was the top selling man’s eau de parfum on Sephora.com.

He’s even back before the cameras, with a starring role in “Jeanne du Barry,” which began shooting Monday. 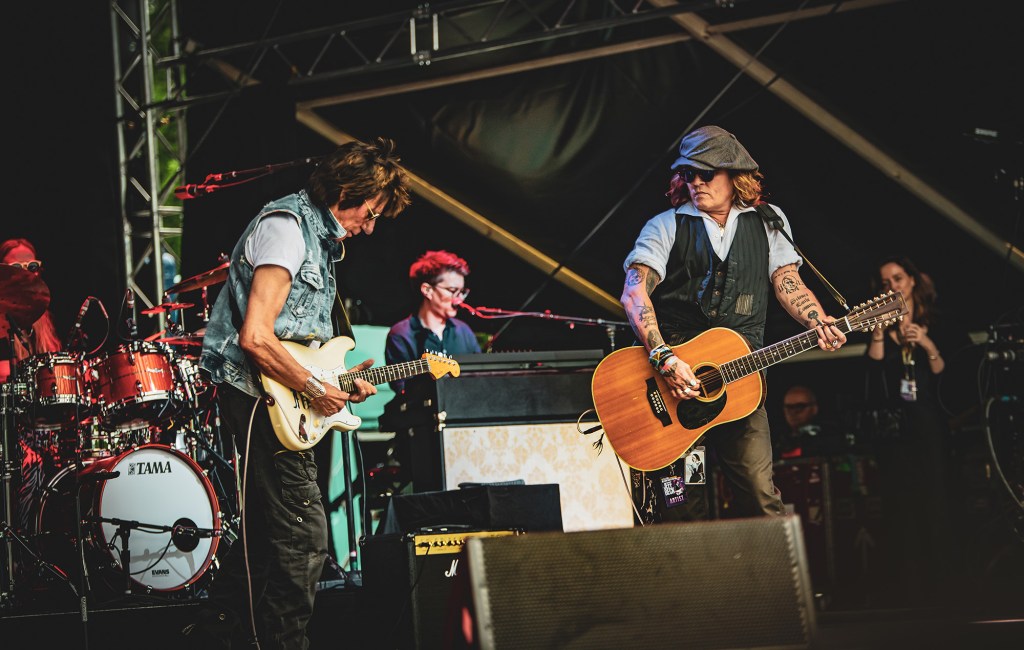 In his first public outing since the trial, Depp (right) joined Jeff Beck on stage.Redferns

That it’s a European film is probably not a coincidence, as the actor had been pressed to resign from “Fantastic Beasts” in 2020 and was made to walk the plank for the “Pirates of the Caribbean” franchise (before reportedly being wooed back in June).

“Being in Europe is business as usual for Johnny,” a friend of Depp told The Post. “He was not canceled or shamed there. So he continues to be more comfortable [in Europe] than in the US.”

All this high-profile activity could be seen as a calculated celebration of his release from the shackles of litigation, but the insider called the timing “serendipitous. This isn’t a victory lap. This is Johnny finally being able to go back and lead his life buoyed by a landslide jury decision that overwhelmingly proved Amber Heard’s allegations to be false.” 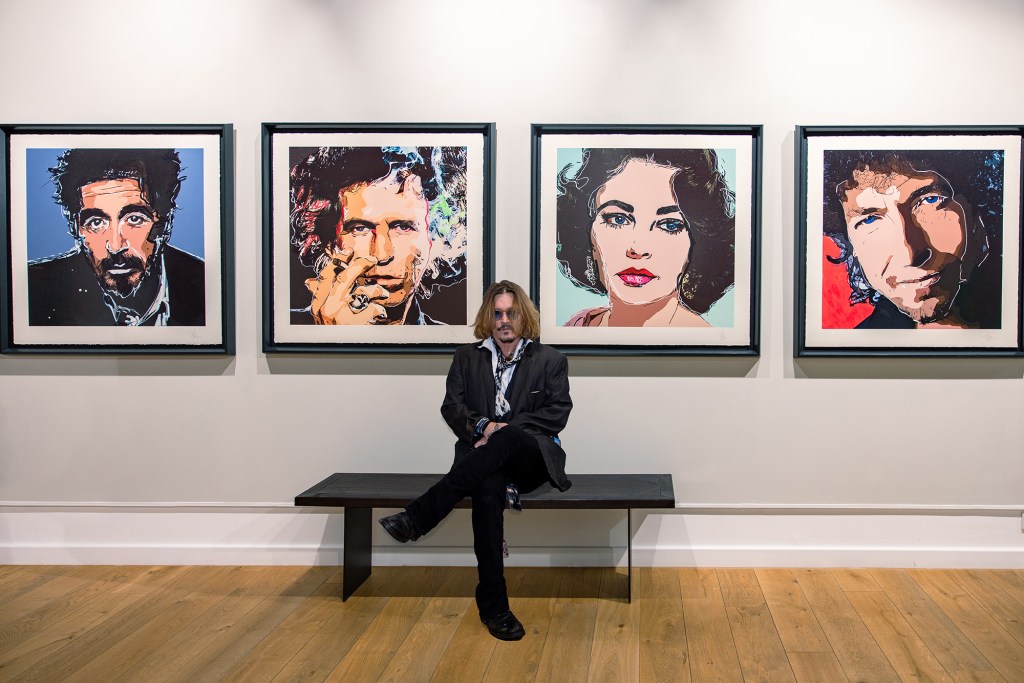 Heard’s representative did not respond to a request for comment.

“These plans were well-laid long before the trial,” the Depp insider added. “The tour and movie were already scheduled. In terms of the art, he has been painting and giving paintings to people for as long as I have known him. He never isn’t painting.”

A gallery spokesperson confirmed to The Post of the art sale, “It’s a case of doing it when the gallery was ready and when Johnny was ready. The timing was decided before everyone knew the [trial] outcome.” 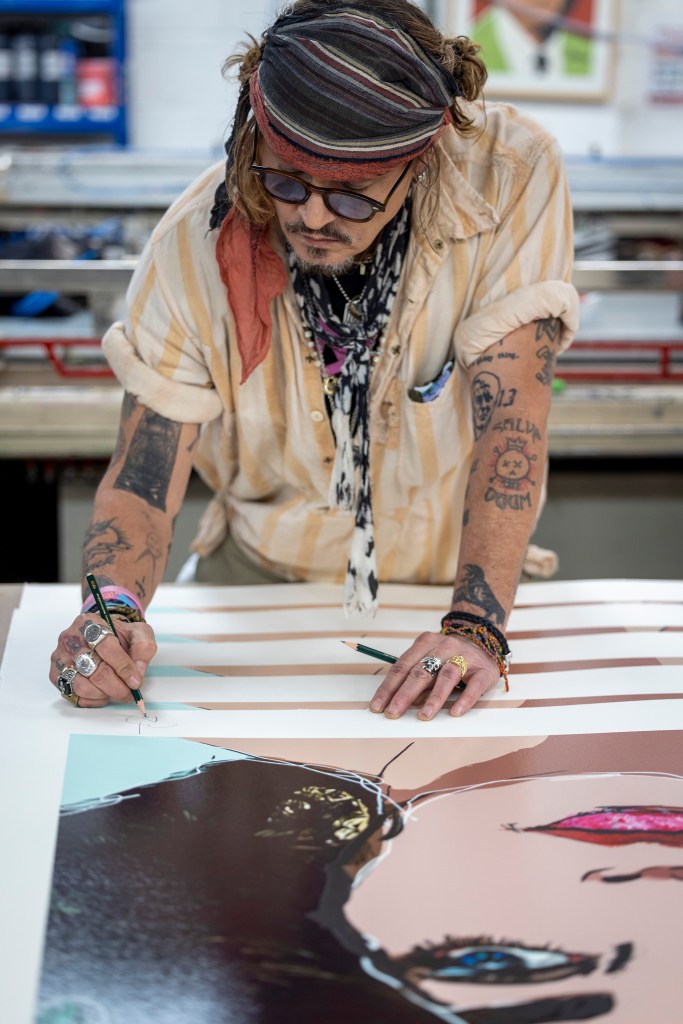 Even a spokesman for the art gallery admitted to surprise over the show selling out in hours.Castle Fine Art

The album recorded with Beck, “18,” released July 15, has “been in the works, on two continents, for quite some time,” said the insider. “Johnny first came to Hollywood with a band and rock ‘n’ roll has been his lifelong love.”

In fact, when the Beck touring schedule conflicted with the end of the trial, Depp chose a side for his sense of commitment.

“He was not there for the verdict because he had already made plans to tour with Jeff Beck,” the insider said of the dozen-plus live performances Depp played with the rocker. “Johnny missed the first night of the tour so he could be in the courtroom for the closing arguments. But he would never let Jeff down. The arguments concluded and he got to the tour as soon as he possibly could.” 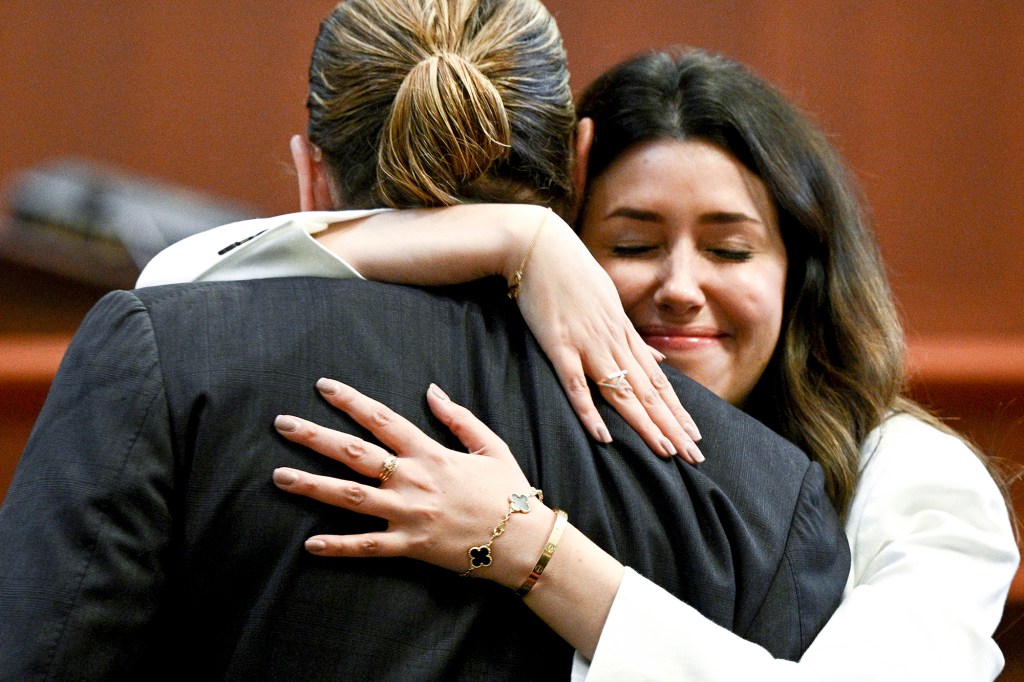 A source said there is nothing to rumors that lawyer Camille Vasquez and Depp became close friends, adding,” Johnny was fighting for his life and she was under his employ to get it done.”AP

At a Prague gig, on July 11, Depp’s trial lawyer Camille Vasquez was in the crowd and went backstage prior to the show. She was vacationing with her boyfriend and had junior members of her legal team in tow. The attorney was seen handing Depp what appeared to be an ornate necklace and the star smiled broadly as he held it aloft for adoring onlookers.

Though Vasquez was hugged and warmly received, a knowledgeable source told The Post that there is no truth to online rumors of romance between the two.

“Camille did a great job … but he and Camille were never good buddies. Johnny was fighting for his life and she was under his employ to get it done,” the source said. “If you’re in a foxhole, you may not go out for beers with the other people in the foxhole, but you all want to win.” 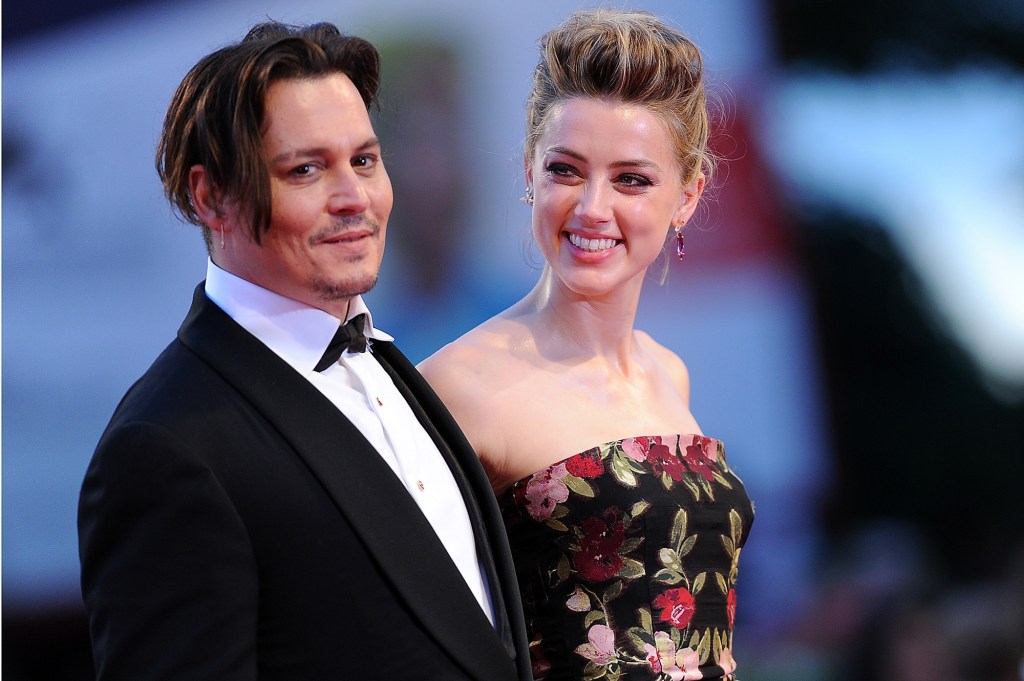 This past week, more ugly claims came out of unsealed documents from the Depp-Heard (above) trial, including by actress Ellen Barkin, who called the actor “verbally abusive.”WireImage

About six weeks earlier, when the legal victory came through, Depp found out about it while on tour in Newcastle upon Tyne, England. Depp’s friend told The Post that the actor watched it on television, surrounded by pals. “More than anything,” said the friend, “he had a sense of relief. They celebrated that night.”

Asked if bottles of bubbly were popped, the friend replied, “I don’t know that he had alcohol. It was relief and validation.”

Added the insider, “Johnny celebrated the win by stepping into something he loves as much as anything: playing music and supporting the record that he made with Jeff. One day after the verdict, he played and a radical swell of support greeted him.” 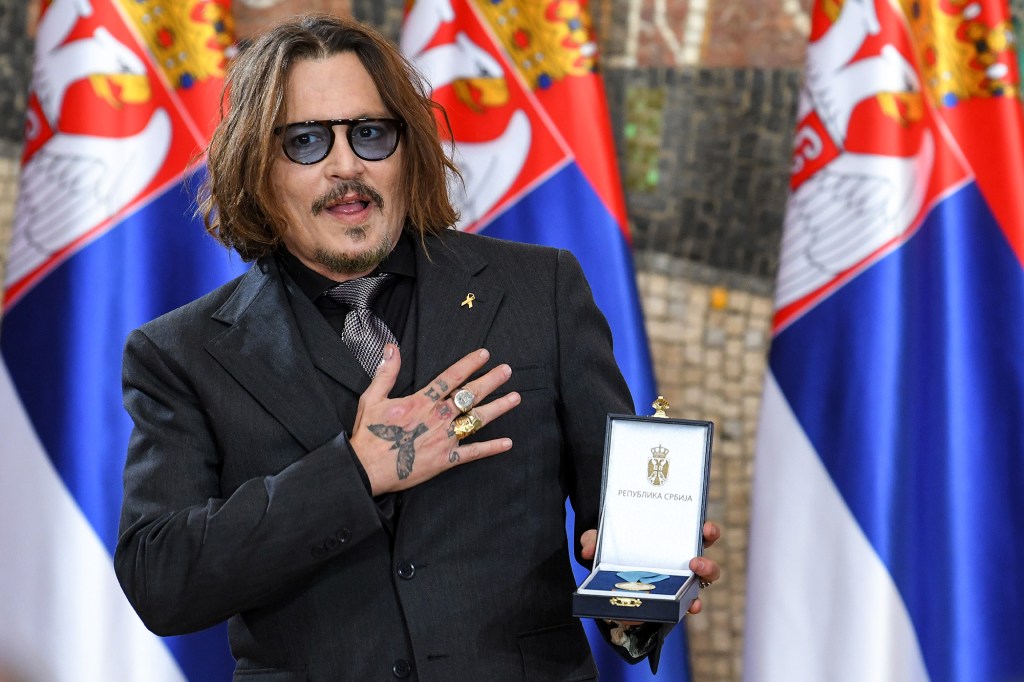 In February, Depp received the Gold Medal of Merit, on the occasion of Serbia’s Statehood Day. A friend told The Post that Depp “was not canceled or shamed” in Europe.Getty Images

It was reported in the UK that some 200 fans mobbed Depp outside the venue and girls had to be held back from grabbing at the actor.

“Johnny takes it in stride and does what he always does,” said the knowledgable source. “He goes out and sees the fans and signs things and makes himself present to the people who always supported him.”

The trial came with no shortage of dirty laundry aired — including allegations of Depp throwing a booze bottle and Heard cutting off the tip of the actor’s finger — but the source said that Depp hunkered down and accepted it.

“It is imperative that he knew the world saw everything come out,” said the source. “Johnny never wavered as the world was finally permitted to know what he always knew [about the situation with Heard]. Then an American jury agreed with him on all of his claims. He was vindicated. How would you feel?”

As for Depp’s current state, physically and mentally, the insider said, “Consider that he’s gone from a trial to a rock ‘n’ roll tour to a movie, with no breaks in between and no time to reflect, I’m sure he’s exhausted, but … he’s working hard at the things he loves.”