Francisco Alvarez fails to be Mets hero, but he wasn’t only one ATLANTA — Billy Eppler and Buck Showalter both assured that it would be conveyed to Francisco Alvarez not to try to play hero ball. To essentially not see every plate appearance from here until through Game 162 as an audition for not only a postseason roster spot, but perhaps meaningful playoff at-bats.

So, of course, here was Alvarez — the youngest player currently in the majors at 20 — in the hero position Friday night. Final at-bat of his major league debut. Bases loaded. Ninth inning. One out. Team down three runs. First place in the NL East at stake in Game 157.

Showalter could have defused this. He could have sent up Daniel Vogelbach to face Braves closer Kenley Jansen. Showalter said Jansen was “neutral” — basically the same results versus lefties and righties. But the stats do not reflect that. Lefties had a .725 OPS this year versus the righty Jansen compared to a .554 for righties.

The Mets haven’t loved Vogelbach’s at-bats lately. So Showalter decided to save him if the game got two more batters to ninth-place hitter Tomas Nido, who actually had homered in his previous at-bat. Showalter decided his best chance for a blast was with Alvarez. He was looking for Alvarez to, yep, be a hero.

Jansen had loaded the bases with one out via a hit by pitch (Mark Canha again), a Jeff McNeil single and a walk to Eduardo Escobar. This is not the historic Jansen with a brilliant cutter. But it is still Jansen. It is still a version of his cutter. It was still 40,000-plus in Atlanta screaming. It was still everything that goes into Braves-Mets — just on late-season steroids considering the records and implications. 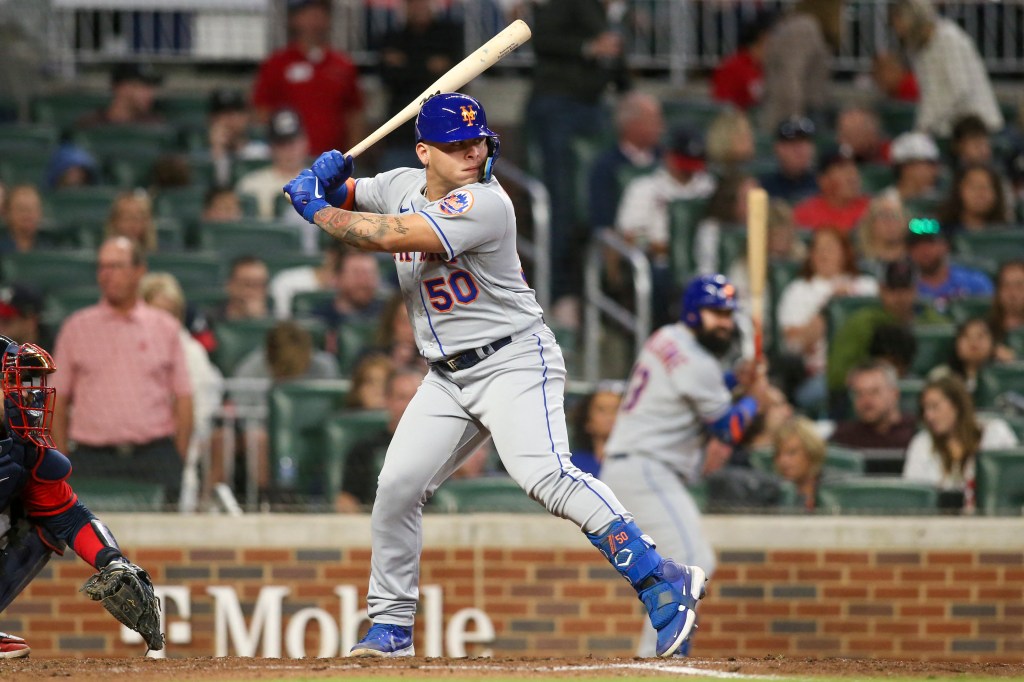 He fouled off a 92 mph cutter, swung through a 91 mph cutter and flailed for strike three at another 92 mph cutter and for the second time in this game lost control of his bat and had it whirl into the netting to the right of the Mets dugout. He said that only happened once all through his minor league season.

Tyler Naquin then waged a nine-pitch battle before striking out. No Met proved a hero in a 5-2 loss. Before this game, standing outside the visiting dugout, Steve Cohen had said, “I like where we are. Let’s see if we can finish it.”

What Cohen and the Mets know now is they can’t finish off an NL East title this weekend. That would have taken a three-game sweep. Now even with two victories, the Mets would leave Atlanta late Sunday night with a magic number of one to clinch their first division championship since 2015.

But the worst scenario is now in play as well. A sweep by the Braves would mean the Mets no longer control their destiny going into the final three games. Still, the Mets are in the better position through 157 games, though both clubs are now 98-59.

Normally to take the title away from the champ you have to knock them out. But a draw works for the Mets as long as they win at least one game in this series. That would give them the season series over the defending World Series winners and an NL East title if the clubs complete 162 games with the same record. 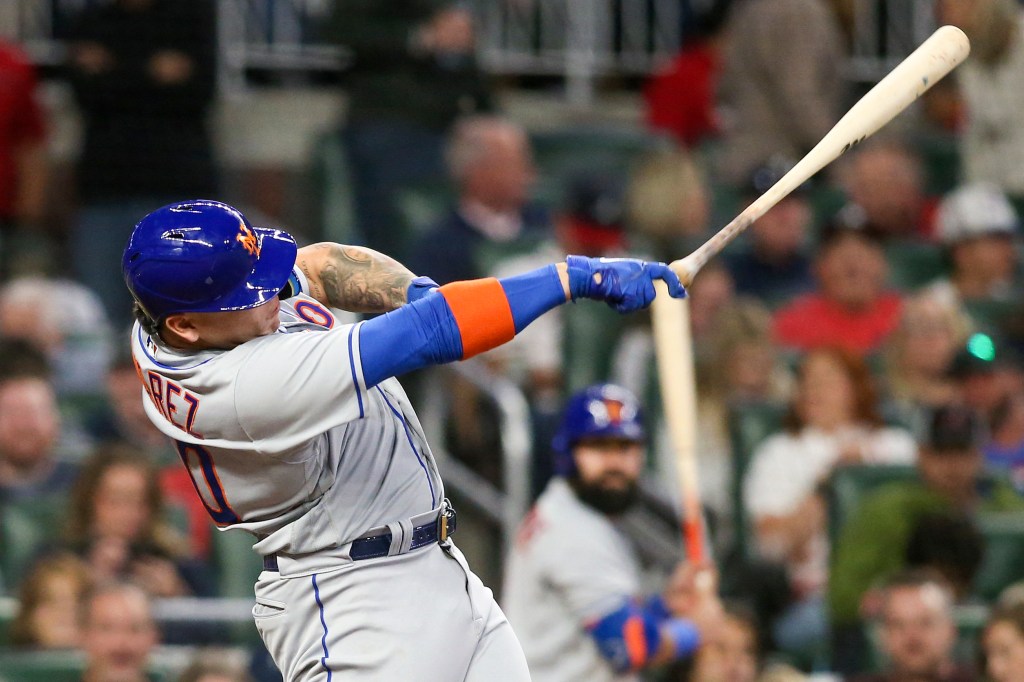 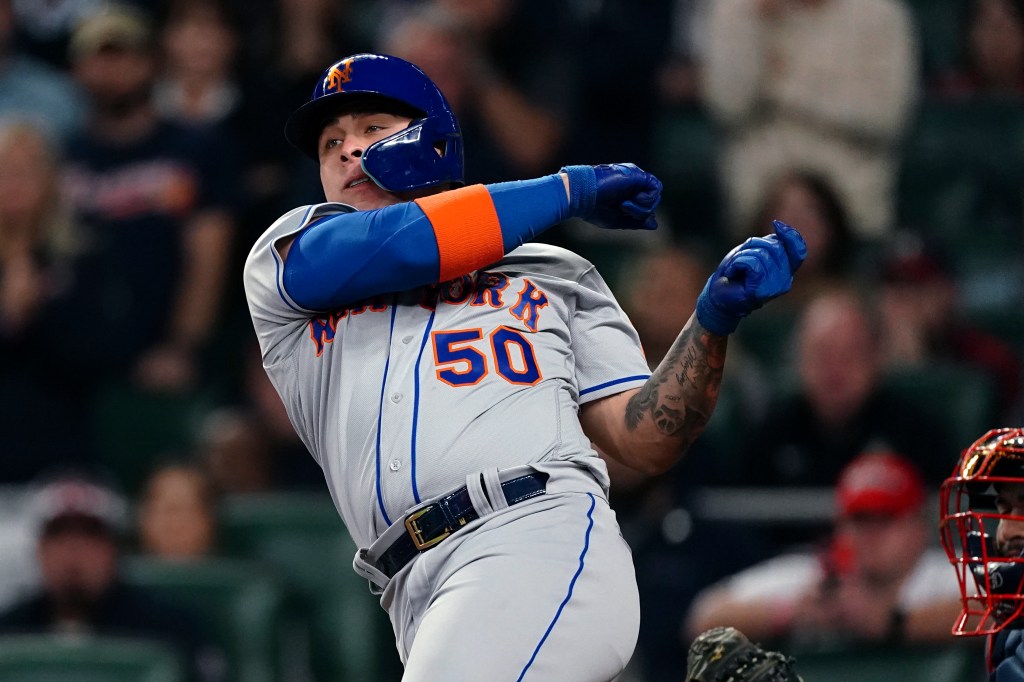 Francisco Alvarez loses control of his bat as he strikes out. AP

And Atlanta tried hard to gift the Mets this game. Left fielder Eddie Rosario made two blunders in the second inning to hand the Mets a run. Orlando Arcia made a baserunning gaffe in the third. After vomiting in the dugout, ace Max Fried had to leave after five innings, “feeling ill,” according to the Braves.

But the four-time defending NL East champs are tough. Their offense has a lot of strikeouts and a lot of homers. They built both totals against Jacob deGrom. He struck out 11 before succumbing after six innings to what Showalter described as a blister on a finger. Nevertheless, he gave up both back-to-back homers and three homers in a game for the first time since 2019 — this time solo shots by Austin Riley, Matt Olson and Dansby Swanson.

Tylor Megill did not handle the deep end well in his new bullpen role, yielding three runs in the sixth. Showalter insists that he is not experimenting. But he is still learning what he can ask for and get from Megill as a reliever. And now the Mets are seeing if Alvarez can give them a power and emotional lift after failure by Darin Ruf to seize the righty part of a DH platoon and no set date yet when/if Starling Marte will return from a fractured finger.

The Mets tried hard in the pregame to lower expectations around Alvarez, their top prospect and one of the most touted in the sport. He was installed in the seventh spot. There were no promises made about future starts. But the game finds you and it is hard to tell a 20-year-old who sees the obvious — the standings for the Mets and a role to seize for himself — to ignore it all.

He already was 0-for-3 in this game before the ninth, having hit into a double play in the second on the first major league pitch he ever saw. The fan base had been clamoring for Alvarez all season. Now, here he was. Bases loaded with the tying runs. A historic closer on the mound. The division in the midst of being decided. Think about yourself at 20. Would you have blocked it all out to face the moment?

Or — like Alvarez — would you have tried to play hero?