The untitled series is based on Gary Rivlin’s book Fire on the Prairie, which was published in 1992.

It will tell the story of Washington, who toppled political corruption and empowered an entire community of Black voters during the city’s quickly changing landscape of the 1980s.

In a move that echoes Stacy Abrams’ work in Georgia, Washington was able to win the Democratic mayoral primary by registering hundreds of thousands of new voters, including a coalition with Latino reformed gang Young Lord. This multiracial coaltion helped replace a political machine put in place by former mayor Richard Daley and he beat incumbent mayor Jane Byrne and future mayor and son of Richard Daley, Richard J. Daley.

Washington, who was besieged by issues including his tax affairs, was mayor between 1983 and 1987, when he died in office.

There would likely have been no President Obama without Washington as mayor with Obama saying that he originally moved to Chicago “in part because of the inspiration of Mayor Washington’s campaign.” 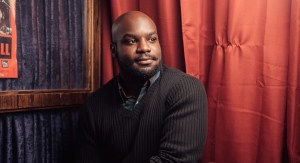 Holter (left), who won Yale’s annual Windham-Campbell Literature Prize, one of the highest awards for playwriting in the world, is writing the adaptation and Baldoni and Sarowitz will exec produce on behalf of Wayfarer Studios

Brandon Riley, who first optioned the book for development, will produce the series aling with M.E. Barker and Scott Schwartz, while Wayfarer Studios’ Andrew Calof And Tracy Ryerson are the executives in charge of production.

Wayfarer Studios is the company behind the Justin Baldoni-directed Clouds for Disney+.