A rap battle turned into a real brawl as rap groups Three 6 Mafia and Bone Thugs-N-Harmony took the stage for their “Verzuz” match.

The showdown in the Los Angeles Hollywood Palladium on Thursday night, hosted by Fat Joe, sparked heated remarks from Bizzy Bone, who claimed Three 6 “mocked” him when they were performing.

“Hey yo, hey yo before we even get started, you ugly muthaf–kas ain’t finna to be mocking me while I’m on muthaf–kin’ stage,” Bizzy said. “OK? Straight the f–k up.”

After the exchange of comments across the stage, the rappers threw objects at each other, which eventually escalated to a full-blown fist fight.

Following the brawl, the livestream cut out due to “technical difficulties” for a few minutes, eventually resuming to Bizzy Bones apologizing.

“I wanna apologize to everybody,” he said, adding that he wanted to “keep the party going.”


Prior to the rap showdown, he crafted an Instagram post calling ’90s hardcore rap group Three 6 Mafia “devil worshippers,” which only amplified the tension going into the night.

But after the brief intermission, the hip hop opponents settled down as the show featured appearances from industry legends such as Lil Wayne, Chamillionaire, Lil John and Terrence Howard. 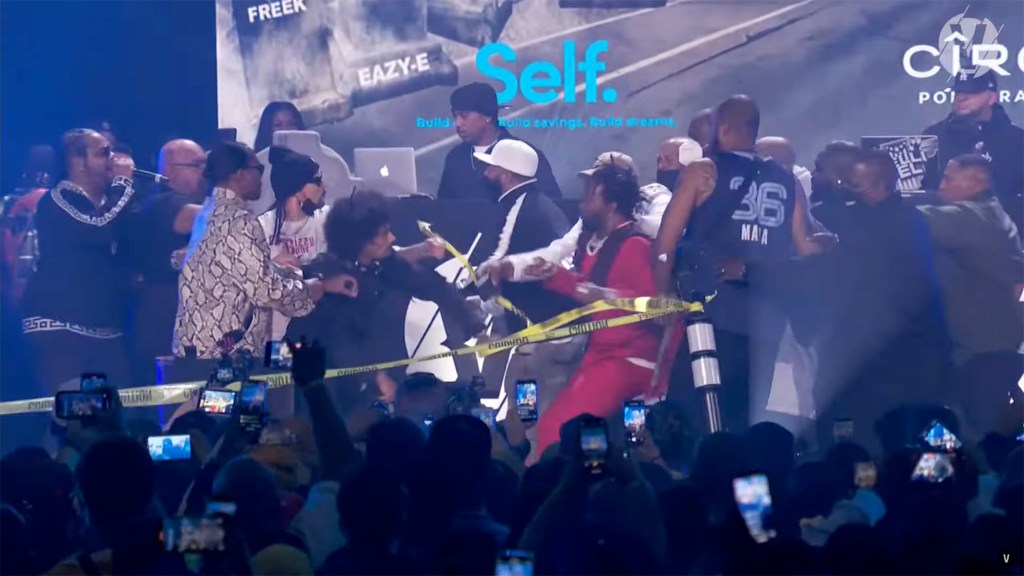 The altercation erupted after some heated exchanges and objects were thrown.YouTube / VERZUZ

Eventually, when the show came to an close, both Three 6 Mafia and Bone Thugs-N-Harmony, who have collaborated with the likes of Ty Dolla $ign and Wiz Khalifa, came together to share an embrace.

Despite the chaos, the night was filled with positivity as the hip-hop legends also paid homage to some of the late rappers that shaped the industry, such as Nipsey Hussle, the Notorious B.I.G., 2Pac and Young Dolph.