She is also proud that “the project is almost entirely Latino, both in front and behind the camera.”

“James Franco has an obvious physical resemblance with Fidel Castro, besides his skills and charisma,” said Fernández about the 127 Hours Oscar nominated actor of Latin-Portuguese heritage.

Fernández will be played in Alina of Cuba by Ana Villafañe. 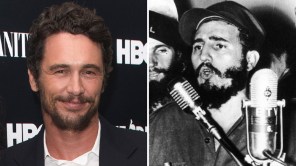 Deadline told you first that Franco would play Castro, Villafañe as Fernández and Mía Maestro as her mother Natalia “Naty” Revuelta, the Cuban-born socialite who El Comandante has a passionate love affair with. The movie which is directed by Miguel Bardem and scripted by Oscar-nominated scribe Jose Rivera (The Motorcycle Diaries) and Pulitzer Prize winner Nilo Cruz, follows the true story of Cuban exile-turned-social advocate Fernandez, whose birth was the result of the tryst between Revuelta and Castro.

“I find the selection of the cast amazing,” Fernández tells Deadline.

“Ana Villafañe is extraordinarily talented, and not only as an actress because she is also a great singer, a very complete performer. I’m sure that Mía Maestro, an actress I admire, will understand and interpret Naty, my mother, in a unique way and I can’t wait to see her building her character,” she added.

In the movie, Revuelta sacrificed her and her physician husband’s personal belongings and finances to help fund the start of the Communist revolution. Fernández learned that she was Fidel Castro’s daughter at the age of 10 when after years of secret visits to her home, her mother finally revealed that “El Comandante” was her biological father. Alina grew to become one of Castro’s most outspoken critics, arrested on more than one occasion for trying to leave, and was classified as a dissident forbidden to travel outside of Cuba. Ultimately, she defected to Spain in 1993, an event that drew headlines from every major news network around the world, before she made Miami her permanent home.

“The rest of the cast is going to be a wonderful surprise for all audiences,” continued Fernández who’ll be a biographical and historical consultant on Alina of Cuba.

“The filmmakers worked a lot and I can’t be more grateful to them for their overall inclusive selection”.

“To me, the most important thing about this movie is that the conversation about Cuba is alive,” Fernández asserted, “Personally, the experience is so far too unexpected but more than anything, humbling.”

Her statements come in the wake of Primetime Emmy winner and The Menu actor John Leguizamo expressing his objection to Franco’s casting as Castro on social media yesterday: “How is Hollywood excluding us but stealing our narratives as well? No more appropriatiofn Hollywood and streamers! Boycott! This F’d up! Plus seriously difficult story to tell without aggrandizement which would b wrong! I don’t got a prob with Franco but he ain’t Latino!”

Alina of Cuba producer John Martinez O’Felan fired back at Leguizamo earlier today saying, “I want to point out that his odd comments, if you base them on genealogy, are a blind attack and lack any factual substance”.

Leguizamo posted a follow-up video today where he further expounded on his initial protest and pointed out how Hollywood has often casted non-Latino actors in Latino roles, while also capping the number of Latino actors in a movie, and appropriating their stories among many other wrongs.

Alina of Cuba is being shot entirely on location in and around Cartagena and Bogota, with Colombia’s colonial Spanish architecture and design standing in for Castro-era Havana, Cuba. Production starts on Aug. 15.