LOS ANGELES — If a picture indeed tells a thousand words, Evander Kane holding seven fingers in the air after scoring an empty-net goal told plenty about the Edmonton Oilers on Thursday night.

The Oilers fought off elimination and forced a deciding game.

Kane’s second goal late in the third period put an exclamation point on the Oilers’ 4-2 victory over the Los Angeles Kings in Game 6 of their Western Conference first-round series.

Edmonton will host the winner-take-all game Saturday night. In a series during which the road team has won four times, Kane likes his team’s chances.

“It’s gonna be juicy,” said Kane, who also had an assist, about what type of atmosphere he expects back north.

Kane has seven goals in the series to tie Minnesota’s Kirill Kaprizov and Pittsburgh’s Jake Guentzel for the league lead. He is the seventh Edmonton player to score at least seven times in a series and the first since Esa Tikkanen in 1991. 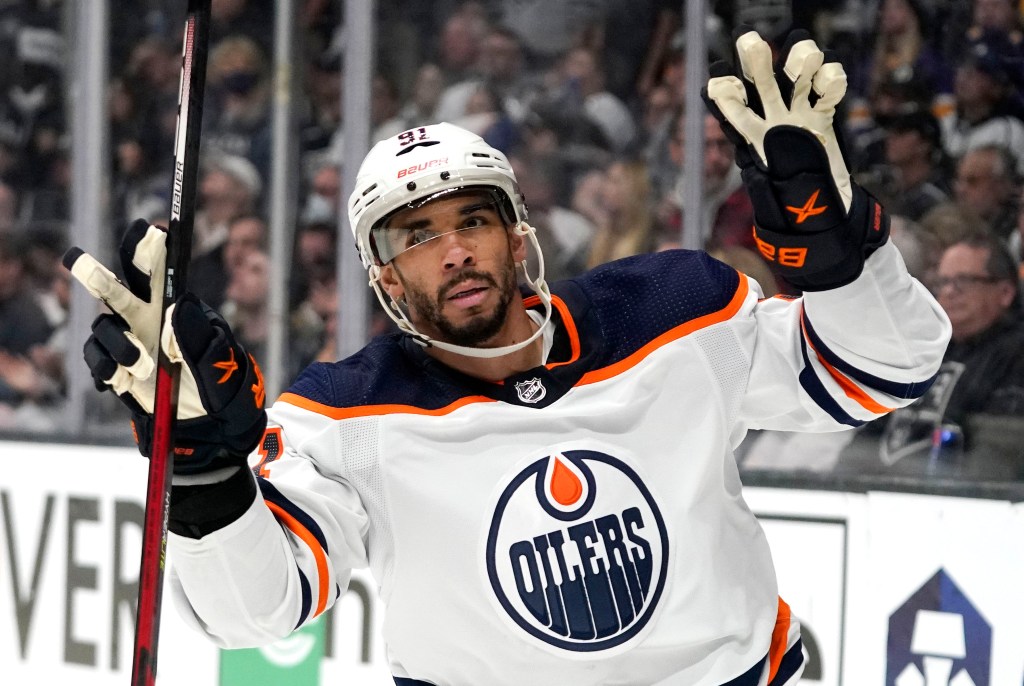 Evander Kane celebrates after scoring an empty-net goal in the Oilers’ 4-2 Game 6 win over the Kings.AP

Kane gave the Oilers a 2-0 lead at 1:50 of the second period when he redirected Brett Kulak’s shot from the point past Kings goaltender Jonathan Quick. The left wing then added an empty-net goal with one minute remaining and flashed the seven fingers to the crowd.

It was Kane’s way of getting even after Los Angeles’ Adrian Kempe cupped his hand to one of his ears Tuesday night in Edmonton after scoring the winning goal in overtime.

“He must not have liked the celebration in our building after they had scored. I think Evander plays with emotion and he’s looking forward to the next game,” Edmonton coach Jay Woodcroft said.

The game was tied at 2 before Barrie snapped a 19-game playoff goal drought at 14:50 of the third with a snap shot inside the far post after getting the pass from Leon Draisaitl.

“Yeah, just kind of saw the puck turn over, I think, and we’re headed the other way and for whatever reason there was a big gap between me and Leon and I just saw that I could jump in and kind of make it an odd-man (rush),” said Barrie, whose last postseason goal was in 2019 with the Colorado Avalanche. “He made a nice little sauce over to me and kind of got lucky to beat Quick there. You know, he’s been playing great and so far out. So just kind of a nice to see that one go in.”

Kane said even though the Oilers squandered a two-goal lead, there was still plenty of confidence as the third period progressed.

“I think we were saying all the right things. I was talking about how we were in good shape,” he said. “It’s a 2-2 hockey game in Game 6 in the third period. I liked our chances to score quite a bit.”

McDavid — who has three goals and 12 points in the series — scored on a wraparound 1:40 into the game for his third goal of the series. It was the third-fastest goal by an Edmonton player when facing elimination.

Cody Ceci added a pair of assists and Mike Smith stopped 30 shots for the Oilers, who host the deciding game Saturday night in Edmonton.

Sean Durzi and Carl Grundstrom scored for Los Angeles, which was looking to wrap up its first series since defeating the New York Rangers in the 2014 Stanley Cup Final. Quick made 33 saves.

“Just timely goals, and I thought we had a good chance there at the end,” said defenseman Matt Roy about the difference in the game. “We just had a little breakdown that led to their third goal, so we just need to minimize those going forward.”

Rookie defenseman Durzi got Los Angeles on the board at 13:59 of the second period on the power play with his first goal of the postseason, a one-timer from the center point.

Grundstrom had the equalizer 29 seconds into the third with a slap shot over Smith’s blocker after getting the feed from Roy for his third.

“It didn’t faze us too much,” center said Anze Kopitar of the early deficit. “I mean, we knew we had to get one on the power play at some point, so that was big. And then, obviously, tie it up pretty early in the third. Just couldn’t push it over the line.” Blues rip Wild to advance into second round of...