There was a central theme among the Giants offensive linemen after the Cowboys beat the Giants, 23-16, Monday night at MetLife Stadium: They let down Daniel Jones.

The quarterback was harassed, hurried and — at times — mashed by the Dallas defensive front, which might as well have been tailgating all night as their pass rushers feasted on the Giants’ porous offensive line.

Jones was sacked five times for losses of 27 yards, but he was pressured 23 times — the most he’s ever faced in his career for one game, according to ESPN. In other words, if not for his terrific scrambling ability, those sack numbers could easily have been doubled.

“We’ve got to have 8’s back,’’ Giants center Jon Feliciano said of Jones. “He went out there and played his balls off. Everything he did. … We’ve just got to have his back.’’ 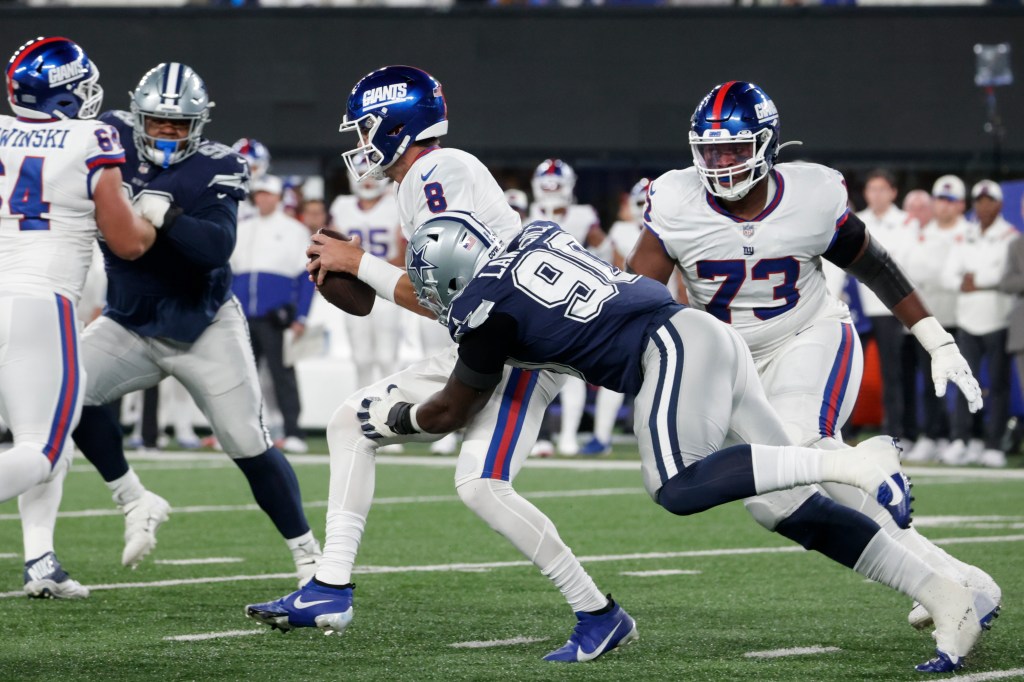 Daniel Jones is sacked during the Giants’ loss to the Cowboys. Corey Sipkin for the NY POST

Jones scrambled for 79 yards on nine carries and almost single-handedly kept the Giants in the game.

“Everyone knows we’ve got to help 8,’’ Feliciano said. “Doing what he was doing, never giving up, taking big hits, making plays with his legs … he did everything he could out there and this loss is on us up front. Not on Dave.

“The game was within reach despite our performance up front, and that’s all on [Jones]. He kept us in this game, and we’ve got to be better for him.’’

The player whose performance stood out the most for all the wrong reasons was rookie right tackle Evan Neal, the team’s first-round draft pick. Neal spent the evening being schooled by Cowboys defensive end Demarcus Lawrence, who had three sacks and three more quarterback hits in the first half alone.

To Neal’s credit, when media was permitted into the locker room, he was showered, dressed and waiting at his locker to take accountability for his poor game — a game he called the worst of his life.

“It’s hard to win that way,’’ Neal said of the five Dallas sacks. “The bulk of those sacks were on me. I take full responsibility for that. I’ve just got to play better. I hate being on the end of this.’’ 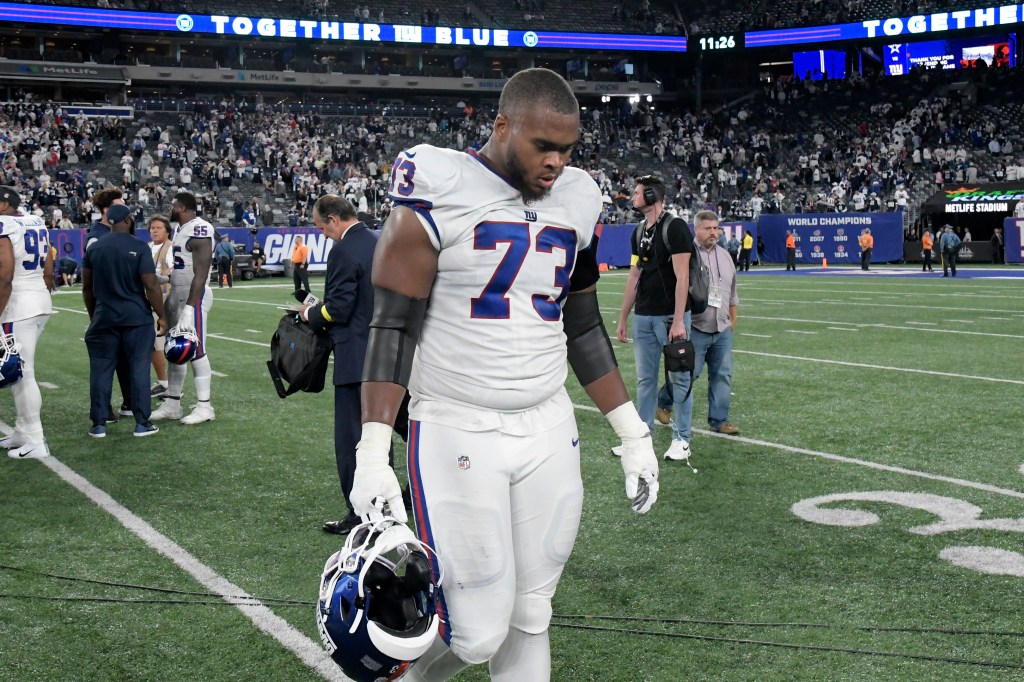 Evan Neal walks off the field after the Giants’ loss to the Cowboys. Bill Kostroun/New York Post

Neal spoke of the stunts the Cowboys ran as plays that gave him the most trouble.

“The way they shifted their fronts kind of made it confusing on who I was supposed to block, but I’ve just got to a better job of preparing so I can pick that stuff up,’’ he said. “I got edged a lot. I wasn’t staying true to my angles and I got beat on the edge. That’s something I have to clean up. Sometimes it just happens like that. I don’t really have an answer or explanation why. It wasn’t the result that I wanted.”

“I’ve got to focus on coming out and being better for Chicago. That really all I can do. I’ve just got to play better. There’s no other way to call it or sugarcoat it.’’

Feliciano said it’s on the veterans on the line to make sure Neal doesn’t get too down on himself for his performance.

“The competitor he is and how serious he takes this, it’s going to be eating at him and we’ve got to make sure that this doesn’t cripple him going forward,’’ he said. “We’ve got to be there for him. This is just one game. Bad performance. I get it. But it’s the NFL, he’s a rookie. It’s going to happen.’’