Emmy Rossum On Her ‘Angelyne’ Prosthetics: “Nothing Of Me Is Me” – Contenders TV: The Nominees Viewers of the Emmy-nominated Angelyne on Peacock might be surprised to learn just how little of star Emmy Rossum they actually saw. Rossum said during a panel appearance at Deadline’s Contenders Television: The Nominees event that 10 prosthetic pieces transformed her face and body into that of Los Angeles billboard queen Angelyne.

“Nothing of me is me,” Rossum said. “There’s two contact lenses in each eye. There’s a chest piece that wraps around up into the neck and the hairline. Even earlobes, hands — everything is not recognizable [as myself].”

“It’s all very meta because she has put inorganic material in herself to put this other identity and reinvent herself as something else,” Biscoe said of the real Angelyne. “It was such a tightrope and such a balancing act of trying to make something that’s inorganic look like skin but also portray that it is inorganic in some aspects while not losing the identity of the version of the person that we are trying to have the viewer empathize with.”

Rossum also plays Angelyne before she undergoes her first surgery. Even then, Biscoe’s team altered her appearance. 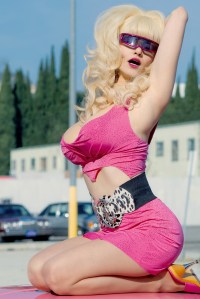 “There isn’t a single look where I don’t have a prosthetic on of some sort,” Rossum said. “Whether it’s just a nose and sometimes PVC piping in my nose, I think it’s a catheter ring to alter the shape of my nose from the inside out.”

“At the end of the day, the biggest goal here is to not distract,” he said. “To make it feel like it seamlessly blends into this world.”

Van Dyke and Biscoe added that providing old-age makeup for co-stars including Michael Angarano helped illustrate how different Angelyne’s look is. Both actors appear as 70-year-olds, and makeup artist David Williams was in charge of the supporting cast.

“I was able to really work with her through many decades to track not only the styles of the day and the sort of specific trends that Angelyne herself followed,” Glicker said. “But also this evolution of herself as being the embodiment of a very specific hot-pink sparkly, magical, fluffy truth.”

Rossum did meet with the real Angelyne and paid her for life rights to support her contributions to culture.

“She has a real Tinkerbell energy — simultaneously moving incredibly quickly and also seeming to kind of hover and float in midair,” Rossum said. Mike Tyson Takes A Jab At Hulu Ahead Of ‘Mike’...