It was third-and-4 from the Chicago 22-yard line in a game the Jets desperately wanted to put out of reach against an inferior opponent.

With the third-quarter drive in jeopardy of fizzling out into an unfulfilling field goal and a mere 10-point lead, Jets quarterback Mike White drifted to his left and unleashed a pass with zip on it and the ball nestled into receiver Elijah Moore’s hands right at the goal line for a TD and a commanding two-touchdown advantage that would lead to a 31-10 win Sunday at MetLife Stadium.

After Moore realized he’d scored his first touchdown in nearly a year, he ran around in the end zone like someone who didn’t know what to do with himself.

Moore, who earlier this season was so frustrated with his lack of targets that he publicly requested a trade and was subsequently benched in the aftermath, showed a joy that had been absent since last season. 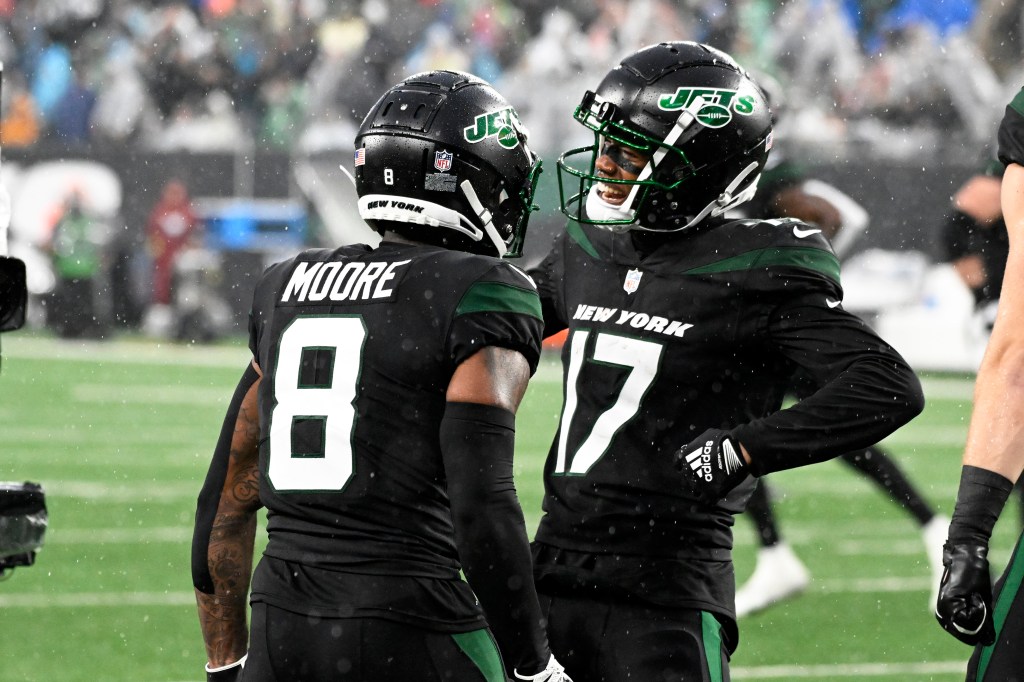 Asked about his “journey’’ this season, Moore said, “Everyone’s going to go through something, and this is my story. I’m just thankful that this is how it’s going to be. I was part of the win, and it feels good to win. I’m just grateful I get to stand up there today and be the person who I know I am and contribute to a winning game.’’

Moore, who had a 42-yard catch-and-run play in the first half, joked that he’d been cradling a football all week, saying, “I missed it. I was talking to the ball [Saturday] and said, ‘Damn, you already know how I feel about you. It’s going to happen soon.’ ’’

“She told me she loves me and she wanted to get back to it,’’ Moore said. “I got to see her a couple times today and I plan to see her more.’’

Coach Robert Saleh said Moore “has always been a great kid,’’ adding, “Whatever happened with the trade request, that’s not him. I feel like he has been working his tail off, being patient, trusting the process, and focusing on the things that he has control over. It was good to see him get production.’’

Speaking of production at the receiver position, rookie Garrett Wilson caught five passes for 95 yards and scored two TDs — his first two scores since the Week 2 win in Cleveland. 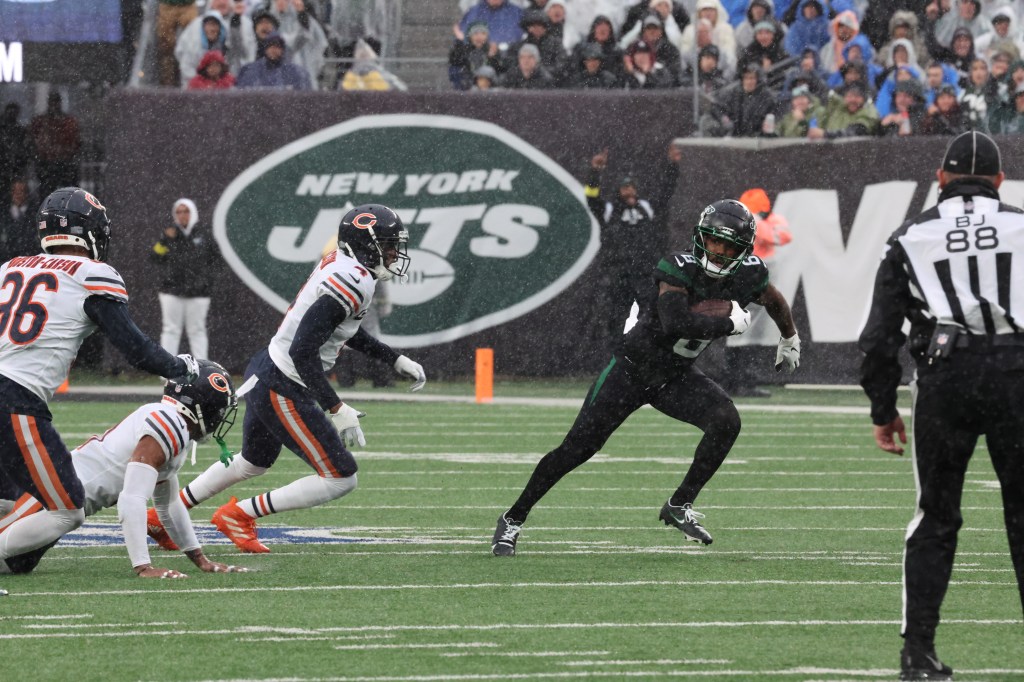 Elijah Moore runs with the ball during the first half. Robert Sabo for the NY POST

Like Moore, Wilson has had his disgruntled moments as well, though less personally but in terms of the team’s performance. He was so disgusted after last week’s 10-3 loss in New England that he called for some change in the way the offense went about things.

“I didn’t mean any harm to anyone by saying it, and I don’t think anyone took it that way, luckily,’’ Wilson said. “Honestly, I feel like people were happy I said it. To come back like this and play the way we did on offense this week, that’s what you want to do. This what we should be doing.’’

Wilson, along with several fellow receivers, sounded happier for Moore than they were about anything else that took place Sunday.

“I told him before the game he’s due, and he played a great game,’’ Braxton Berrios said.

“No one’s more deserving than him,’’ Wilson said. “Despite what people were thinking on the outside, we really know what’s going on inside the facility and that’s a really good teammate, that’s a really good player. And to see him get what he deserved today, I was really excited.

“I expect a lot more just like that coming from that boy. He’s a great player.’’

Corey Davis, the veteran in the receivers room, added: “That’s definitely a guy we’ve got to get more involved, because he can do a lot with the ball in his hands.’’

How Rangers are moving forward from frustrating...

‘Wednesday’ Season 2 Could Include More Of The...