So much behind-the-scenes drama, so little onscreen satisfaction.

Director Olivia Wilde’s so-so suspense film “Don’t Worry Darling” has been beset by nasty rumors since it premiered in Venice earlier this month.

Readers devoured news that its terrific star Florence Pugh really hates Wilde and co-star Harry Styles, who are a couple; that Wilde misled the public as to why scandalous actor Shia LaBeouf departed the project; and that Styles maybe hocked a loogie on Chris Pine.

What fun! Shame all of that chaos was way more entertaining than the film that caused it.

“Darling” is a garbage pizza of other better movies and TV shows: “The Stepford Wives,” “The Twilight Zone,” “Get Out,” “Black Mirror,” “Pleasantville,” “The Truman Show,” “The Village” and on and on. A full-blown sci-fire sale.

What it lacks — and that all of those memorable works have — is a mind-blowing shake-up that puts everything we thought we knew into question. An M. Night Shyamalan twist, if you will. With Wilde’s movie, we’re a mile ahead of the plot by minute one, with 121 still to go.

“Darling” is set in a peaceful desert enclave that looks like Palm Springs (because it was filmed there.) There are beautiful mid-century modern homes and swimming pools. All the cars, clothes and record players look straight out of the 1950s. However — and this is problem No. 1 — we can tell straightaway that we are not in the ’50s. 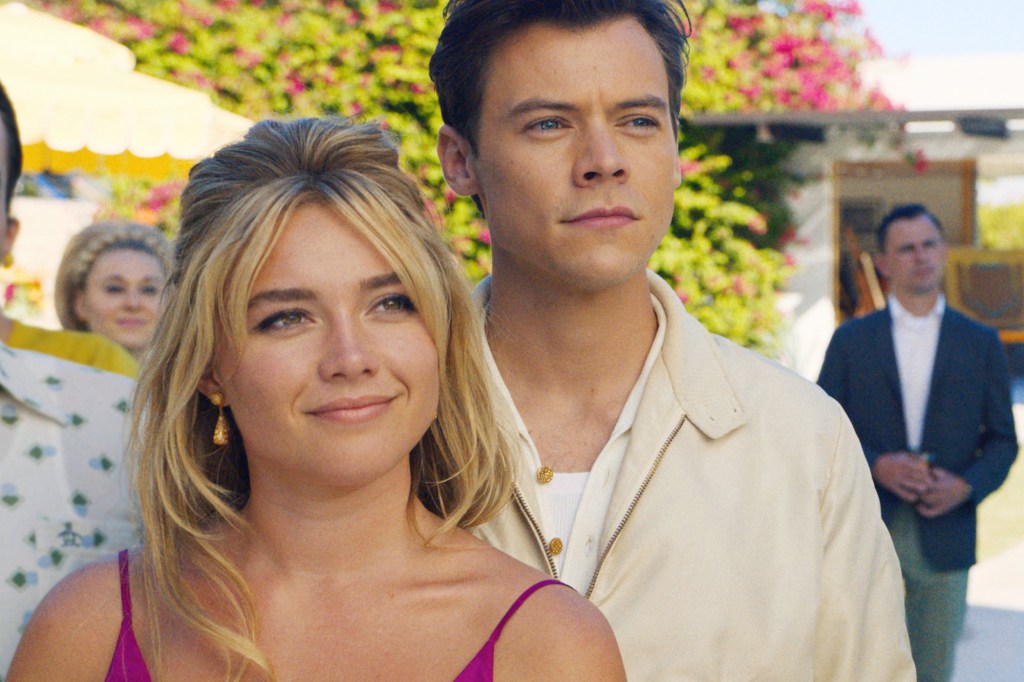 Alice (Pugh) is a doting housewife who lives with husband Jack (Styles). Every morning she looks immaculate as she makes him bacon and eggs and waves goodbye as he drives to his job at the mysterious Victory Project where he and the town’s men make “progressive materials.” No one knows what that really means. They could be manufacturing nukes, paper straws or AOC pamphlets.

Home alone, Alice lives a life of free-flowing cocktails with no hangovers, contant sex, ribeye steak for lunch, dance class, nightly parties and zero humidity. Please sign me up for this dystopian nightmare.

One fateful day, after venturing beyond where the strict town rules allow, Alice witnesses something at Victory Project’s mountain HG that we viewers are not privy to, wakes up back home and becomes newly paranoid about her creepy community led by an all-powerful leader named Frank (Pine, fine). 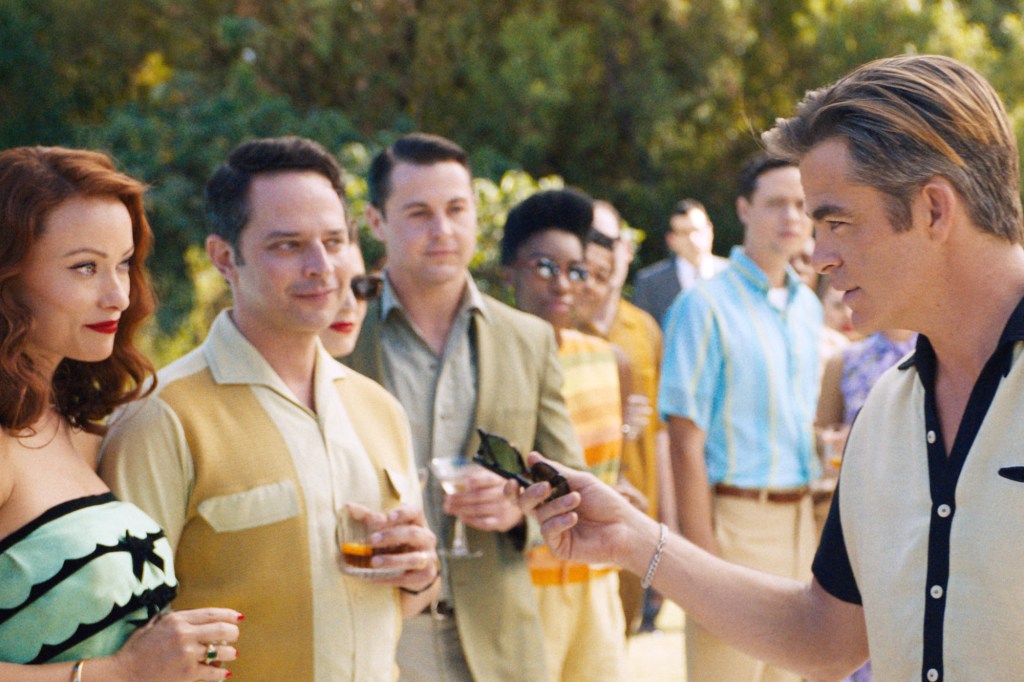 What Wilde and writers Katie Silberman, Carey Van Dyke and Shane Van Dyke do — not unwisely — is bring modern social movements into the old formula. That’s great. But there’s not much more to it than men are bad.

Pugh, a sensational actress, keeps our interest as she grows increasingly suspicious and sees disturbing visions in mirrors and on windows. She brings class and gravitas to a movie that would otherwise be kinda trashy.

As her seemingly nice husband, Styles is decent. For now, the pop star is better at being a charming romantic lead than broken, erratic and angry. Regardless, he fits in snugly in this idealized world. Surely many peoples’ dream life would involve being married to Harry Styles. 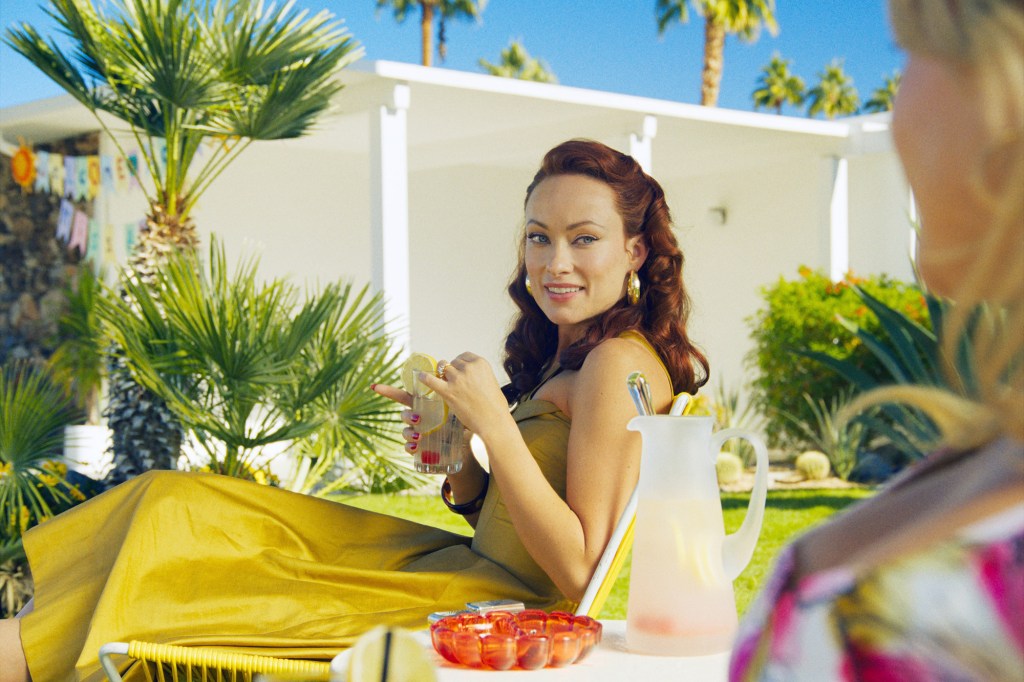 And Wilde, who first burst into the director’s chair with “Booksmart,” gives “Darling” appealing visuals and the story is nicely paced — even if we crave more style, camp and extremes to immerse us in this oddball place.

The director also acts very well in the supporting role of Bunny, a fun-loving neighbor with a secret.

The aim stated the start of every episode of “The Twilight Zone” was to take viewers on a “ journey into a wondrous land of imagination.” Not quite up to the task, “Don’t Worry Darling” brings us to a Palm Springs AirBnb with the singer of “Watermelon Sugar.” ‘The Goldbergs’: How Jeff Garlin’s Murray Was...