Dave Gettleman’s goodbye to Giants may have already started If this is Dave Gettleman‘s last game with the Giants, he is going his best to make the day a good one.

Gettleman, 70, was spotted on the field taking photos with his family Sunday before the Giants kickoff against the Washington Football Team at a mostly empty MetLife Stadium. He also chatted with Washington coach Ron Rivera, an old friend from Carolina, and co-director of player personnel Mark Koncz, who came with Gettleman to New York from the Panthers. 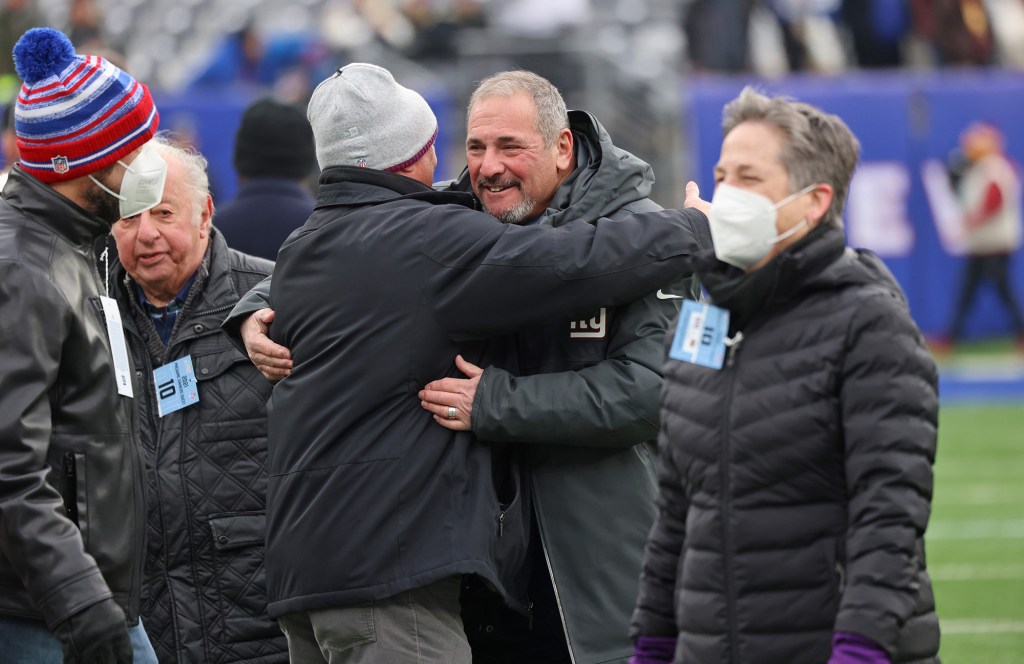 Giants general manager Dave Gettleman gets a hug on the field before would could be his final game in the job.Charles Wenzelberg/New York Post

It seems all but ordained that Gettleman will no longer be with the franchise following the end of this season. There is a chance co-owners John Mara and Steve Tisch allow Gettleman, an NFL lifer, to retire instead of outright firing him. He has been the Giants’ GM for four seasons and posted a 19-45 record overall.

Here’s #Giants GM Dave Gettleman with co-director of player personnel Mark Koncz, who he brought with him from #Panthers. DG took photos with family on field. Talked for a bit with old friend Ron Rivera. Didn’t see him interact with anyone else in front office pic.twitter.com/9HNdNvRv9c

The 4-12 Giants have struggled to put together a competitive outfit under his leadership, and Gettleman has been at the center of a number of missteps, often buttressed with public comments that sounded all too sure of moves that ended all too poorly.

That includes, but is not limited to, drafting Saquon Barkley second overall, signing Golden Tate and Kenny Golladay, and getting a lackluster return for Jason Pierre-Paul.

All told, it seems like something of a mercy that Gettleman’s tenure will soon be at its end.

He seems well-aware of the situation, and there’s nothing wrong with making the best of what should otherwise be a dreary day at MetLife Stadium. How TikTok Is Fueling Hollywood Marketing...