LOS ANGELES, Calif. — The question after 40 minutes against the Kings Tuesday night was which Rangers team was going to take the ice in the third?

To say it was a game full of highs and lows would be an understatement. Not only did it seem as if it were two different teams wearing the Rangers white road jerseys in the first and second periods, but the third period was a roller coaster ride by itself. But the Rangers strapped in and held on tight.

The Blueshirts, working to protect a 3-2 lead at the start of the final 20 minutes, had the Kid Line effectively holding the offensive zone as they peppered Kings goalie Cal Peterson with shots. They even drew him out of the net entirely at one point, leaving a wide-open net for Kaapo Kakko before Peterson made a diving save to deny the Finnish winger his second goal of the night. 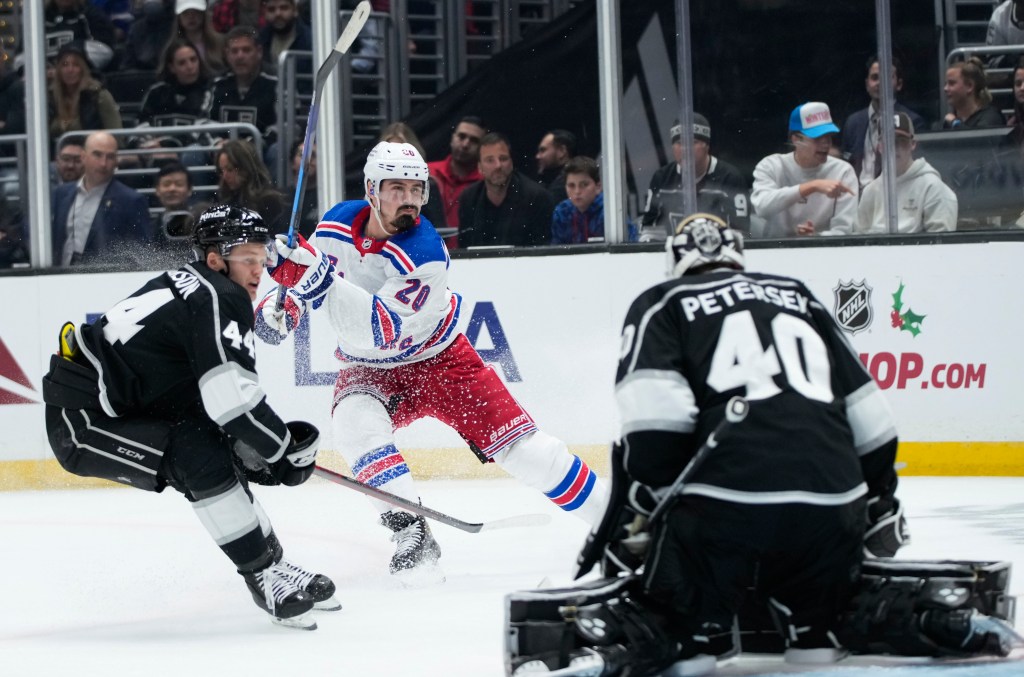 Chris Kreider scores the game-winning goal, the first of his two third-period tallies, to lead the Rangers to a 5-3 win over the Kings.AP

What felt like seconds later, the Kings came down the other end and Sean Walker scored.

It could have been deflating, but then Chris Kreider made the kind of hustle play that any team can get behind in a game as tumultuous as this one. Streaking down the ice to meet a dumped puck from Mika Zibanejad that bounced off the wall, Kreider wired one home to regain the lead for the Rangers. He also added an empty-netter in the final minute to seal the victory.

“Yeah that was crazy,” Ryan Lindgren said of the sequence on Kakko’s near goal. “I couldn’t really tell how it stayed out. But obviously then we kept it in the zone for a little longer and they come the other way and get a goal. But, you know, we just got right back to our game and we scored there shortly after. It says a lot about our team.”

It was a tale of two periods from the first frame to the second. After falling behind 2-0 in arguably one of the worst periods of the season, the Rangers flipped the script and scored three unanswered to take a one-goal lead into the final period. They played faster, skated with purpose and managed to bounce back in convincing fashion.

In the locker room between the opposite periods, the consensus was that they played better in the second half of the first. The Rangers chose to focus on building upon that, instead of zeroing in on their struggles in the beginning. 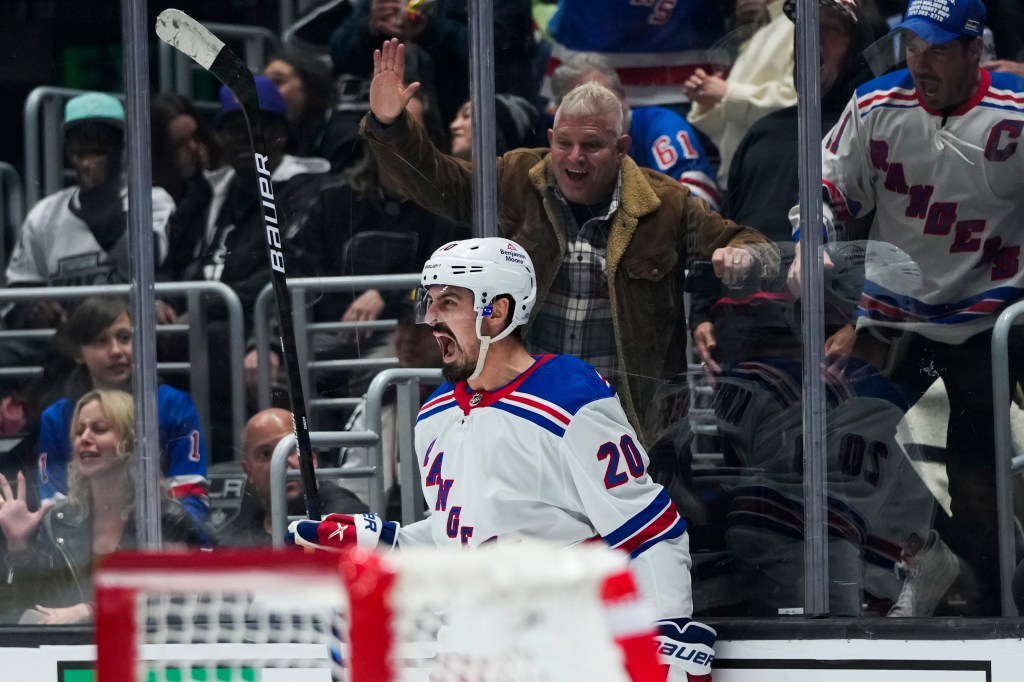 Chris Kreider celebrates after scoring one of his two third-period goals in the Rangers’ win.AP

Up until the second period Tuesday night, the Rangers’ list of five-on-five goal scorers in the previous four games didn’t feature any members of the top six. That was a problem in itself, but one that the Rangers took a step toward rectifying against the Kings as three top-six skaters scored in the win.

The Rangers also haven’t had many bounces go their way, but they were fortunate to get a few in this one. Defenseman Braden Schneider scored his first goal of the season, flinging the puck from the top of the zone through traffic to put the Rangers on the board. Plus, Vincent Trocheck chipped the puck — inadvertently or not — up and over Peterson to knot the game at two-all in the second, as well.

“I think some chances went in,” captain Jacob Trouba said. “Trocheck’s goal was pretty opportunistic. Good bounce. I think we’re due to get a good bounce or two and kind of get us back in games. Get us feeling good. You get back and you’re feeling better and you’re rolling. Things kind of happen for you.” ‘Bachelor In Paradise’ Finale: Brandon And...