Chris Bassitt’s return to the mound for the first time in six weeks — the period it took to recover from a 100 mile-per-hour line drive that fractured his cheek — featured three shutout innings. After the game, he shared photos on social media that showed just how frightening the injury was.

The tweet came less than an hour after Bassitt’s Oakland Athletics lost to the Seattle Mariners, 6-5, on Thursday afternoon, and contained a pair of photos that zoomed in on the bloodied side of his face next to right eye.

“Don’t make excuses and get your ass to work,” the 32-year-old Bassitt tweeted. “If you won’t do it then we will find someone who will. This org turns you into a better person and I’m grateful.”

A ball hit by Brian Goodwin in an Aug. 17 game against the Chicago White Sox drilled Bassitt in the face and resulted in him being carted off the field and admitted to the hospital, where he was told that he’d suffered a displaced tripod fracture in his cheek.

Why did I come back? What’s the point? I’ll tell you why… We are the green and gold. Bob Melvin is our manager. Don’t make excuses and get your ass to work. If you won’t do it then we will find someone who will. This org turns you into a better person and im grateful. pic.twitter.com/QFaCZmi5Uf

“There’s so many comparisons you can make, but I mean I’ve thrown hundreds of thousands of pitches in my day and it’s happened one time,” Bassitt said earlier this week. “It is what it is. If it happens again, I know the doctor to go to, I’ll say that.”

Bassitt said after the game he doesn’t know the plan for his next appearance — whether it’d be another three-inning stint as the Athletics try to stretch him back toward a typical starter’s length. The A’s trail the Yankees by four games with nine left for the second AL wild-card spot. Oakland manager Bob Melvin said postgame that Bassitt is scheduled to make two more starts before the regular season concludes. 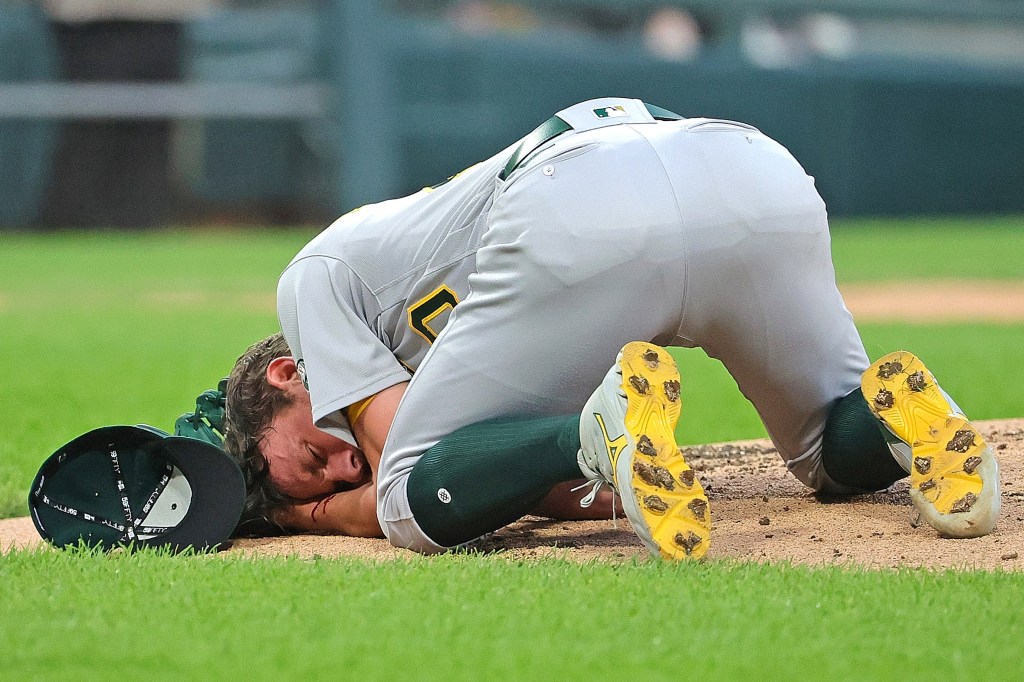 Chris Bassitt was hit by a line drive for the Oakland A’s on Aug. 17, 2021.Getty Images

Bassitt escaped a jam in the first inning after allowing the first two batters to reach on a single and a walk. He retired the side in the next two innings, striking out four Mariners and exited with the A’s up 3-0.

“A lot of guys, if anything like that happens to them and they would probably choose to shut it down,” outfielder Mark Canha told The Mercury News. “Not to their own fault at all, you want to play it safe and it’s not an easy thing psychologically to come back from for a lot of reasons. The guy just wants to help the team.”

Oakland reliever Sean Doolittle said that “it’s every pitcher’s worst nightmare.” Tony Kemp called Bassitt a “fearless cat,” and Melvin said that his return injected a “charge” into their dugout.

Before the injury, Bassitt had compiled a 12-4 record with a 3.22 ERA across 25 appearances, all of which were starts, during his sixth season with the Athletics.