Chet Holmgren puts on show to lead No. 1 Gonzaga to easy win over No. 2 UCLA LAS VEGAS — Chet Holmgren swatted the ball off the backboard, turned and coolly brought it up the floor like a spider-legged point guard. He lost a defender with a dribble behind his back at the top of the key, took two steps and stretched out his 7-foot-1 frame for a two-handed dunk.

Gonzaga’s lanky freshman has an unmatched skill set. His team may not have a rival at this point, either.

Holmgren put on a show with an array of dunks and blocked shots, and top-ranked Gonzaga overwhelmed No. 2 UCLA 83-63 Tuesday night to win the Empire Classic.

“This was not a shock to none of us,” Gonzaga forward Drew Timme said. “It’s what we expect of him and what he expects from himself. It’s just Chet. He’s one of a kind.”

The Zags (6-0) played like Vegas headliners, showing there’s a big gap between No. 1 and the current No. 2 with a dazzling display at both ends. Gonzaga shell shocked UCLA (5-1) with a huge early blitz and never let up to beat its second top-5 team this season. 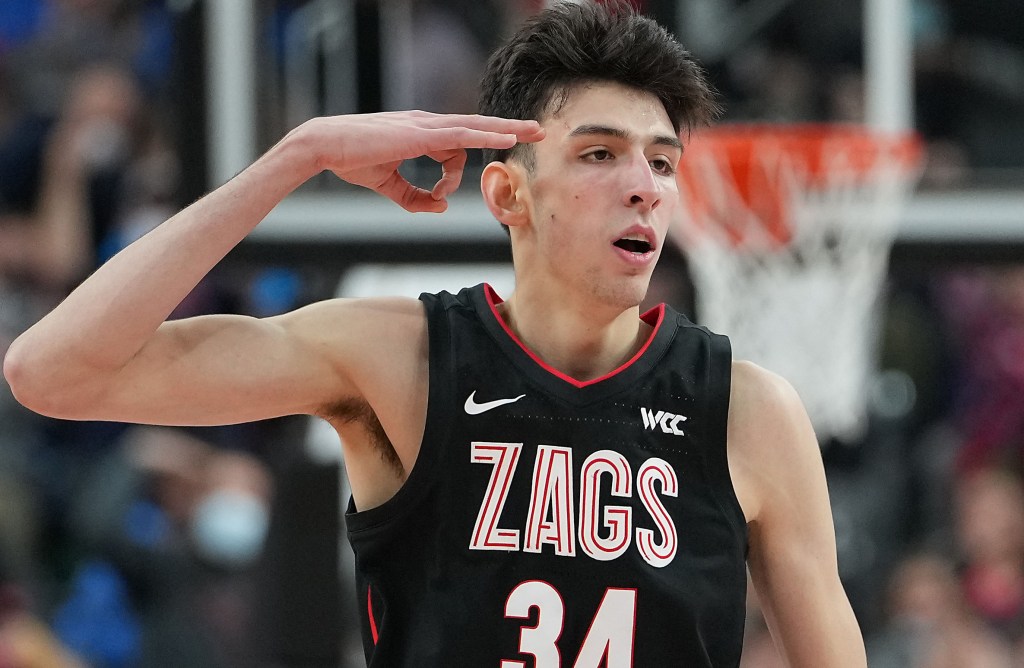 Chet Holmgren celebrates after scoring a 3-pointer during No. 1 Gonzaga’s 83-63 blowout win over No. 2 UCLA.USA TODAY Sports

Holmgren stole the show as a soloist at times, denying shots, swooping for dunks and awing the crowd with his agility. He finished with 15 points, six rebounds and four blocked shots.

Andrew Nembhard was the best player on the floor, according to UCLA coach Mick Cronin, finishing with 24 points. Timme was crafty as usual, scoring 18 points in a raucous environment that felt a bit like March Madness.

“It reminded me of something you’d see in a regional final or regional semifinal,” Gonzaga coach Mark Few said. “It was a great atmosphere and it matched perfectly for the game, what was at stake and the two teams that were out there.”

Jaime Jaquez Jr. had 19 points, but had to work for everything he got, and preseason All-American Johnny Juzang was held to 11 points. 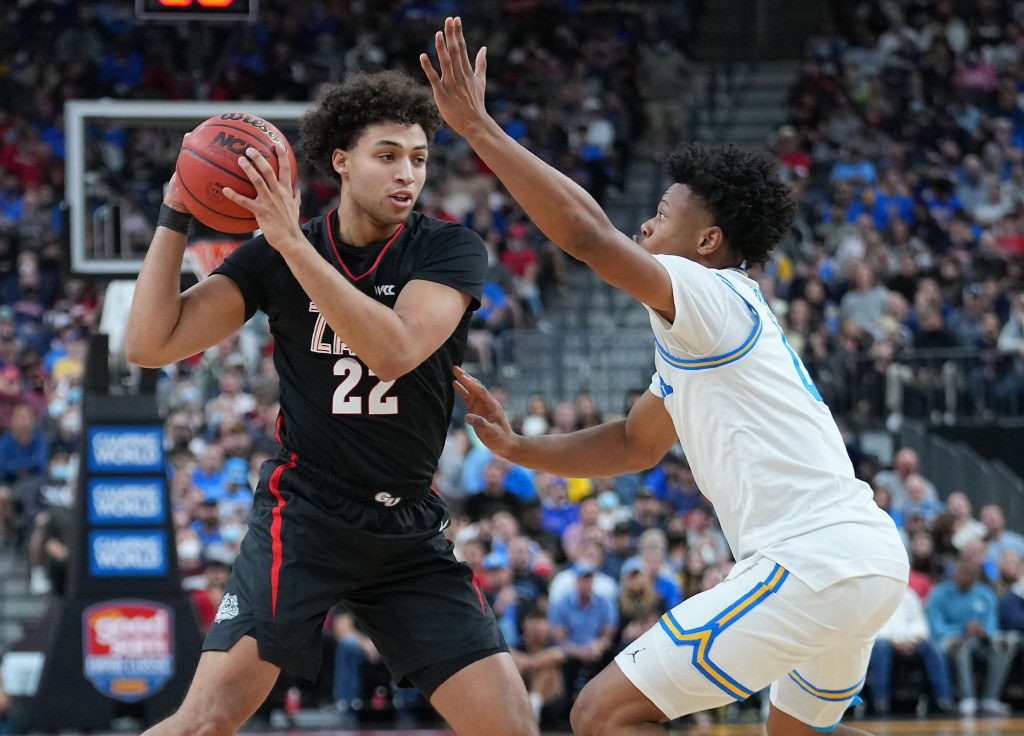 UCLA found a bit of a rhythm after an ugly offensive first half but had no chance of stopping the Zags, who shot 56%.

“We’re not a good defensive team and we got exposed by a great team,” Cronin said.

The Strip’s bright lights shined on college hoops luminaries all week, with No. 4 Michigan, No. 5 Duke, No. 12 Houston, Arizona, Oregon and Wisconsin appearing on the marquee.

Top billing went to the first No. 1 vs. No. 2 meeting of teams from the Pacific Time Zone.

Gonzaga lost Suggs and a few others, but Few filled in the roster holes with transfers and talented freshman, headlined by Holmgren. The Zags have looked just as good, winning their first six games by an average of 31.3 points.

UCLA has everyone back, though big man Cody Riley has been out since injuring his knee in the season opener. The Bruins didn’t look so good against Bellarmine on Monday, prompting Cronin to say his team was not ready for Gonzaga after the 75-62 win.

Gonzaga was at its free-flowing best on offense, picking apart the Bruins with crisp cuts and passes. The Zags made eight of their first nine shots and used a 19-2 run to go up 29-8. Even after the pace slowed, Gonzaga still led 45-25 at halftime.

“We didn’t put up much resistance,” Cronin said.

The Zags caused even more problems with their quick hands and feet, swatting away passes and shots to set up transition opportunities.

UCLA took numerous difficult shots and missed most of the open ones it got, going 11 for 41 from the field in the first half.

Even when the Bruins started to somewhat solve Gonzaga’s defense in the second half, they couldn’t stop the Zags.

Holmgren put a punctuation to the crushing, hitting a 3 and waving to the crowd as he ran back.

Dickie V is back, baby!

ESPN analyst Dick Vitale was behind the microphone at T-Mobile Arena for the first time since undergoing cancer treatment.

The 82-year-old announced in October he has lymphoma and had his fourth round of treatment a few days before Tuesday’s game. Vitale got emotional at the opening of the broadcast and got a loud ovation when he was shown on the video board inside the arena.

“He just loves this game and has done so much for this game,” Few said. “What an ambassador he is for college basketball.”