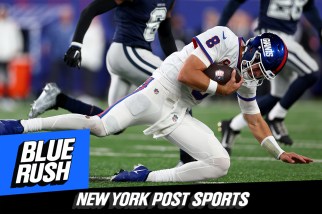 Daniel Jones was just pressured for a 74th time.

The Giants offensive line was nothing short of a train wreck on Monday night. Jones was pressured a career-high 24 times. The Giants QB had no time to throw and not many good receivers to throw to. The result? A 23-16 loss to the Cowboys in front of a rowdy MetLife Stadium on “Monday Night Football.”

The Giants are still 2-1 with the Bears coming to East Rutherford on Sunday, but the offense did not look good. The defense struggled. There was no blocking for the QB. There was no pressure from the defensive front. A lot needs to change if the Giants want to get back to picking up wins.

Lawrence Tynes and I reacted to Big Blue’s loss Monday on a new episode of the “Blue Rush” podcast.

Catch up on all episodes of “Blue Rush,” a New York Giants podcast, by subscribing to the podcast on Apple Podcasts, Spotify or wherever you get your podcasts.