BUFFALO, N.Y. — The Buffalo Bills joined the Las Vegas Raiders on Tuesday as the only NFL teams to require proof of vaccination against COVID-19 for all fans over the age of 12.

The rules will be the same for Buffalo Sabres games at the KeyBank Center when the NHL season gets under way next month.

The change comes after reports from fans about lax mask enforcement during the Bills’ opening game at Highmark Stadium Sept. 12.

Unvaccinated fans were allowed to attend, but were supposed to wear masks at all times under guidelines from the Centers for Disease Control and Prevention. Many at the game said they saw very few face coverings at the packed stadium, including in restrooms and other indoor areas where even vaccinated fans were expected to wear a mask.

Erie County Executive Mark Poloncarz said the policy shift was a joint decision between the county and Pegula Sports & Entertainment, which owns the Bills and Sabres.

“We believe that the only way to ensure a real safe atmosphere is to actually have people vaccinated,” Poloncarz said. 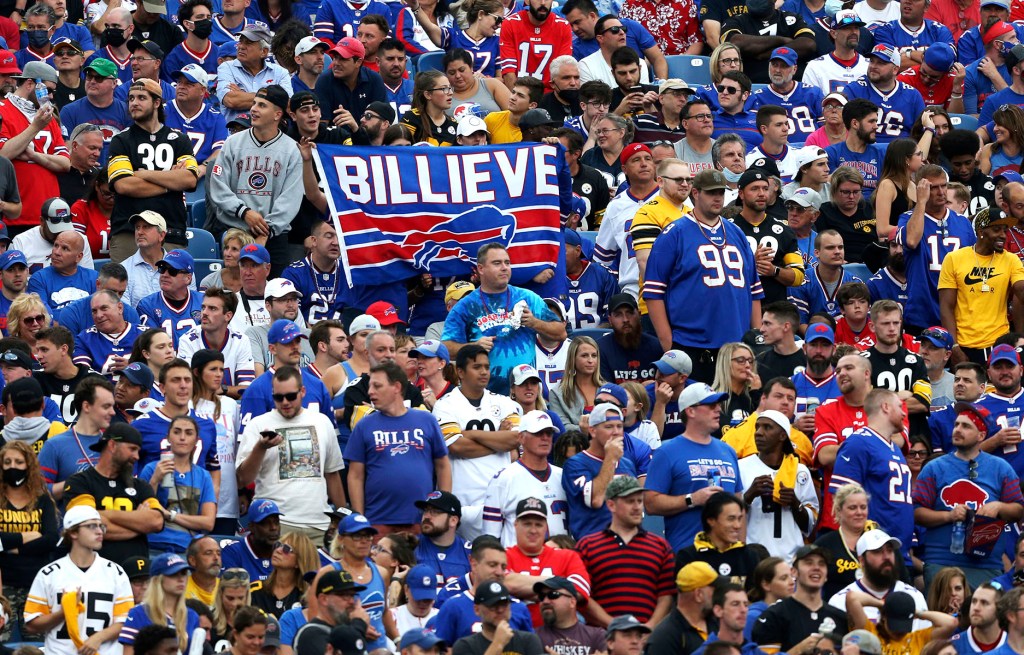 Bills fans are requiring their fans to be vaccinated to attend games. AP

There will be no option to offer a negative virus test instead of proof of vaccination, as allowed by the New Orleans Saints and Seattle Seahawks, the only other two teams to announce vaccination requirements.

During the regular season last year, the coronavirus pandemic had Buffalo playing home games in an empty stadium. The rules were loosened to allow about 6,700 fans — about 10% of the stadium’s capacity — to attend the Bills’ two home playoff games in January.

Under the new policy, vaccinated fans will no longer be required to wear masks at home games but the mask requirement remains in place for children under 12, who are too young to be vaccinated.

Fans must have received at least one dose in time for the Sept. 26 game against Washington and be fully vaccinated by the Oct. 31 game against Miami.

Buffalo also joins a growing list of cities announcing vaccine mandates for hockey fans. The expansion Seattle Kraken announced last week that they will require fans ages 12 and over to show proof of COVID-19 vaccination.

“As a general matter, we very much support health and safety rules that promote and encourage vaccination,” NHL Deputy Commissioner Bill Daly said in an email. ‘Generation’ Canceled By HBO Max After One Season