There’s not often much bang for the buck in the NHL preseason, so it’s a bonus when fans get to see a player who all by himself is worth the price of admission.

That man, on Friday night in Newark, was the Rangers’ Artemi Panarin.

After spending much of the evening setting up teammates for futile attempts on net, Panarin sent a shot from the left circle past the stick side of previously impenetrable Mackenzie Blackwood 3:48 into the third period. The Rangers went on to a 2-1 victory at Prudential Center after K’Andre Miller scored almost eight minutes later.

In his first appearance of the preseason, the 30-year-old Panarin played an eventful 20 minutes and 10 seconds on a line with Filip Chytil and Vitali Kravtsov.

“You know how Bread is, he’s a special player,” Miller said. “He’s all over the ice. He’s always making plays for us and giving us scoring chances. We missed him a little bit, but it was good to see him back out there tonight.” 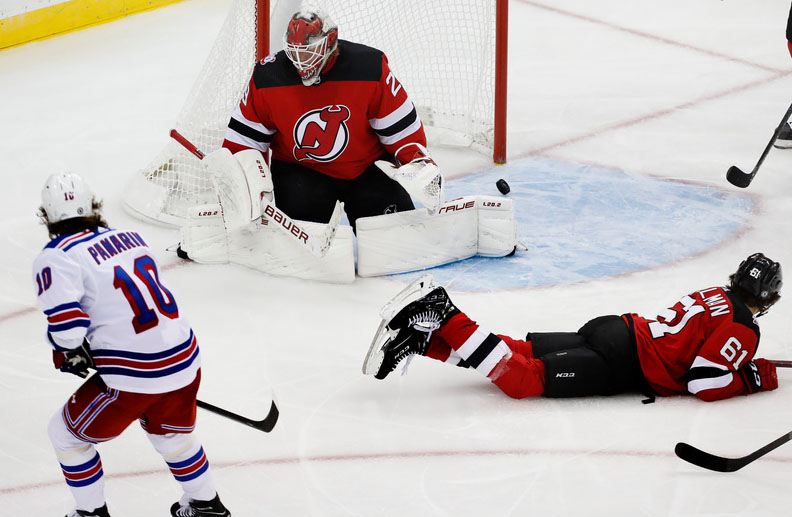 Artemi Panarin (No. 10) scores a goal on Mackenzie Blackwood during the Rangers’ 2-1 preseason win over the Devils.AP

Earlier in training camp, Panarin expressed disappointment in his performance last season, though he notched a career-high 74 assists and totaled 96 points. But on Friday, he sounded quite content with the proceedings.

“It’s always good to get back to a real hockey game,” Panarin said. “A scrimmage and a practice are different things. So I’m happy to be back, just do what I can do, and we win, so …”

During the regular season, the Rangers expect to roll out a nominal second line that features Panarin in tandem with free-agent center Vincent Trocheck, but that combination has yet to play together in a game. Last night, Trocheck sat out with an illness.

“I’m not worried about that right now,” Rangers coach Gerard Gallant said. “Obviously, I think Fil went in there tonight with Kravtsov and Panarin and played really good, so whatever the line shakeup, at the end of the day we’re getting ready for game one [and] it really doesn’t concern me. We’ve got some top-end forwards and I think they can interchange with different lines.”

Another first-time preseason participant was Barclay Goodrow who, like Panarin, was wearing the “A” as alternate captain. The 29-year-old right wing, who played eight more games last postseason after returning from an ankle injury he suffered against Pittsburgh, saw a little more than 17 minutes of ice time.

“He had a long offseason with the injury and I thought he played really good tonight,” Gallant said. “He’s a character guy that’s important to our team.” 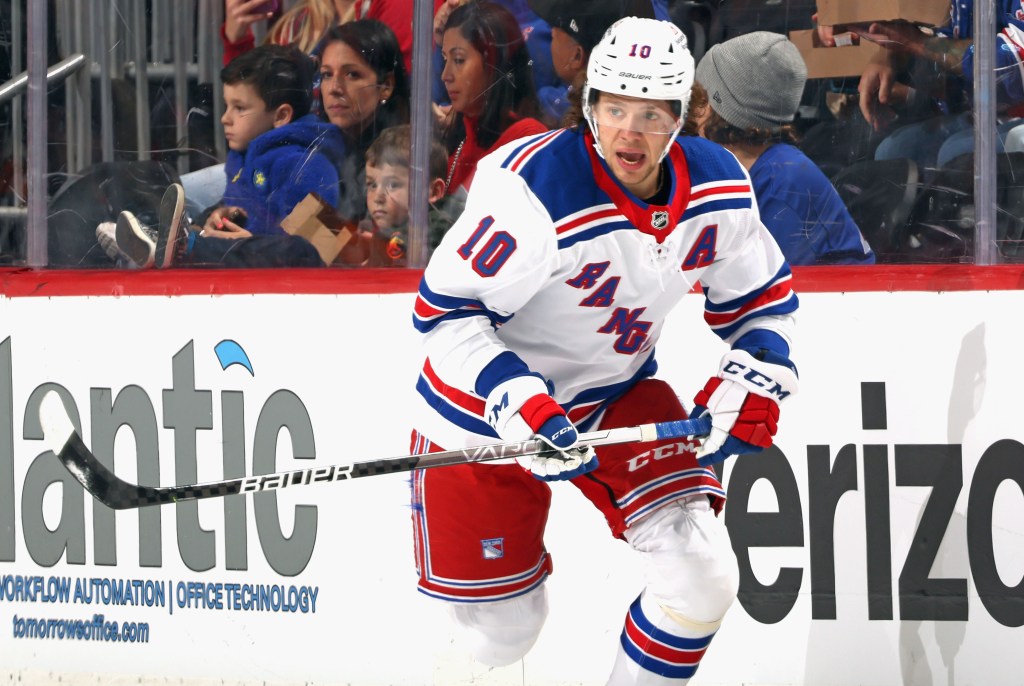 The Rangers might want to find a way to bottle the first 20 minutes from Friday. They continually won puck battles, fed the slot and peppered Blackwood with 17 shots, all of which he stopped.

Louis Domingue’s first real action in the Rangers’ net came halfway through the period. Domingue could have phoned in an order of spicy pork and broccoli, the meal he famously ate between overtimes before being called on to play in the Penguins’ triple-OT victory at the Garden in Game 1 of the first round series last season.

The chances began to even out, and Domingue didn’t get away unscathed as Jack Hughes scored on a top-shelf dart 2:21 into the second period.

The Rangers trimmed eight players from their camp roster, the biggest name being Brennan Othmann.

The 16th-overall selection of the 2021 draft was returned to the Flint Firebirds of the OHL, for whom he scored 50 goals and 97 points last season.

Othmann, 19, collected two assists in two preseason games. He was not eligible to be sent to Hartford of the AHL.

The Rangers had the option of playing the right wing in up to nine regular-season games without triggering his entry-level contract, but the team shipped him out before the three-day team-bonding exercise next week in Providence.