The last time the No. 1 team in the country lost to an unranked team was 2008.

The last time Alabama lost to an unranked team was 2007.

Texas A&M snapped both those streaks and brought true chaos to this college football season.

The Aggies dragged a two-game losing streak into Kyle Field on Saturday night, looking like one of the most disappointing teams in the country.

Then Texas A&M beat the mighty Crimson Tide, scoring almost as many points in a walk-off victory (41) as the Aggies had in three previous games (42) against Power Five opponents.

“We knew the last two weeks that we didn’t play to the best of our ability,” A&M defensive back Antonio Johnson told reporters. “We knew this week was an opportunity.”

A&M’s upset, the biggest victory of Jimbo Fisher’s tenure in College Station and the first over Nick Saban by one of his former assistants in 25 tries, capped yet another thrilling Saturday in a season that is trying hard to make up for the pandemic-plagued mess of 2020. 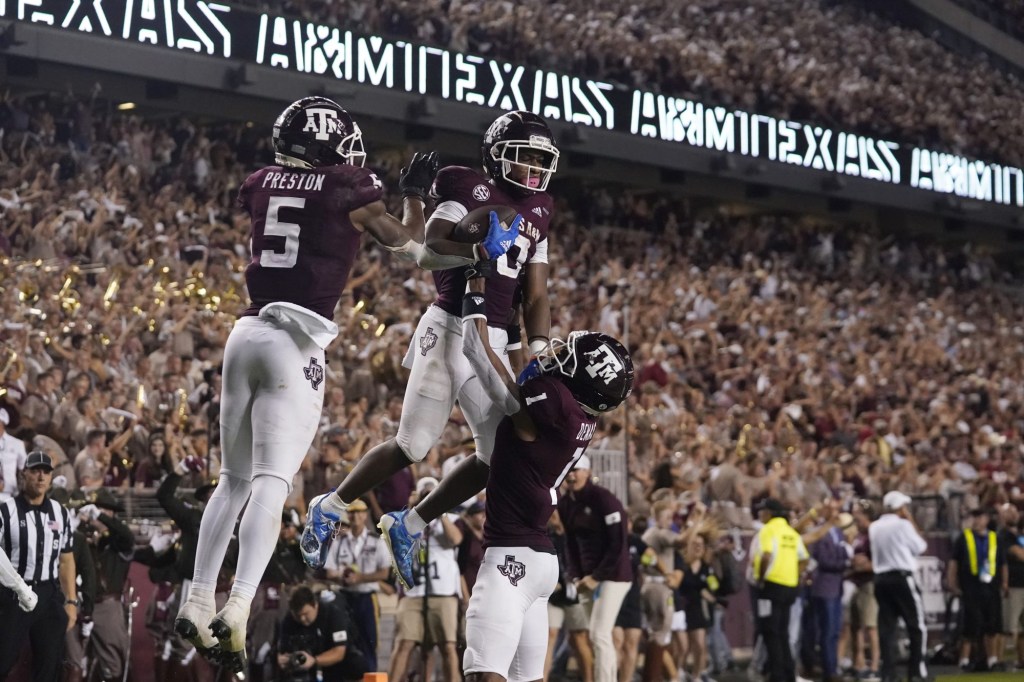 At night, No. 14 Notre Dame and No. 9 Michigan needed late field goals to win from behind before Texas A&M topped them all with a stunning upset.

Over the last two weeks, 10 teams ranked in the top 15 have lost, including seven in the top 10.

A 2021 season that so many fans feared would be long march to the same old, same old, with super teams turning the College Football Playoff race into a foregone conclusion, has now gone full tilt.

Defending national champion Alabama succumbed to a shaky defense and an offense that misfired at the most inopportune times. And the Tide was taken down by a backup quarterback.

A&M’s Zach Calzada came in to the game with five touchdown passes and four interceptions since taking over for the injured Haynes King in Week 2, and then threw three TDs with one pick against ‘Bama.

Toss the Tide on the pile of title contenders whose championship hopes have already taken hit. A playoff without Alabama, Ohio State and Clemson is a very real possibility. 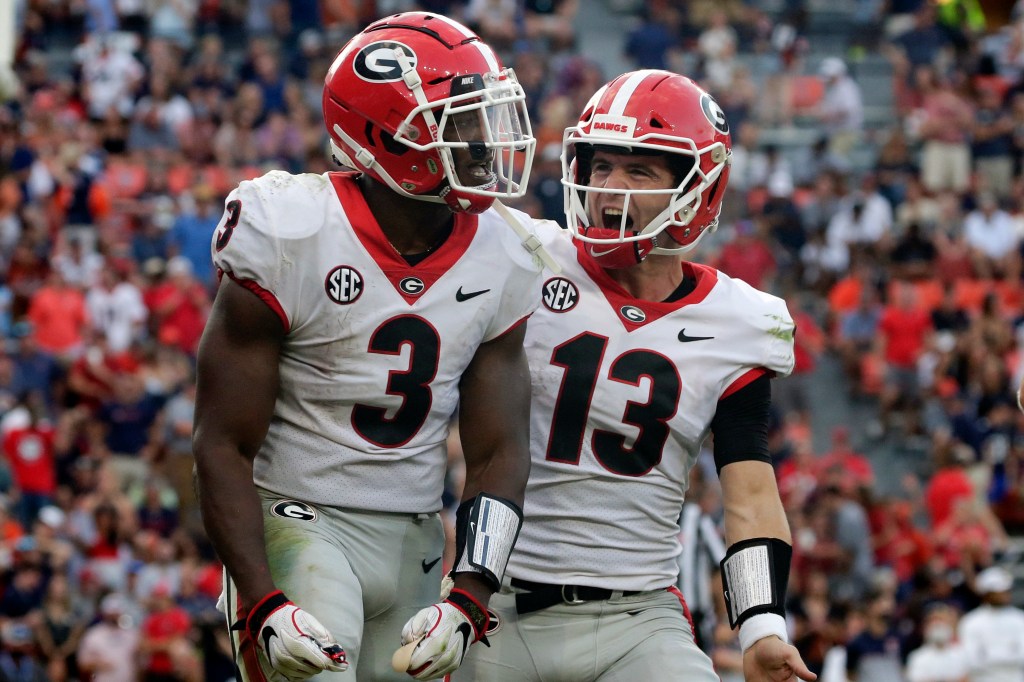 When the new AP college football poll comes out on Sunday the top three could very well look like this:

At a time when quarterback depth has never been harder to accumulate in college football, several of the biggest games of Week 6 were decided by backups signal-callers.

No. 6 Oklahoma remained unbeaten behind freshman Caleb Williams, who rallied the Sooners from three scores down in the second half against No. 21 Texas. 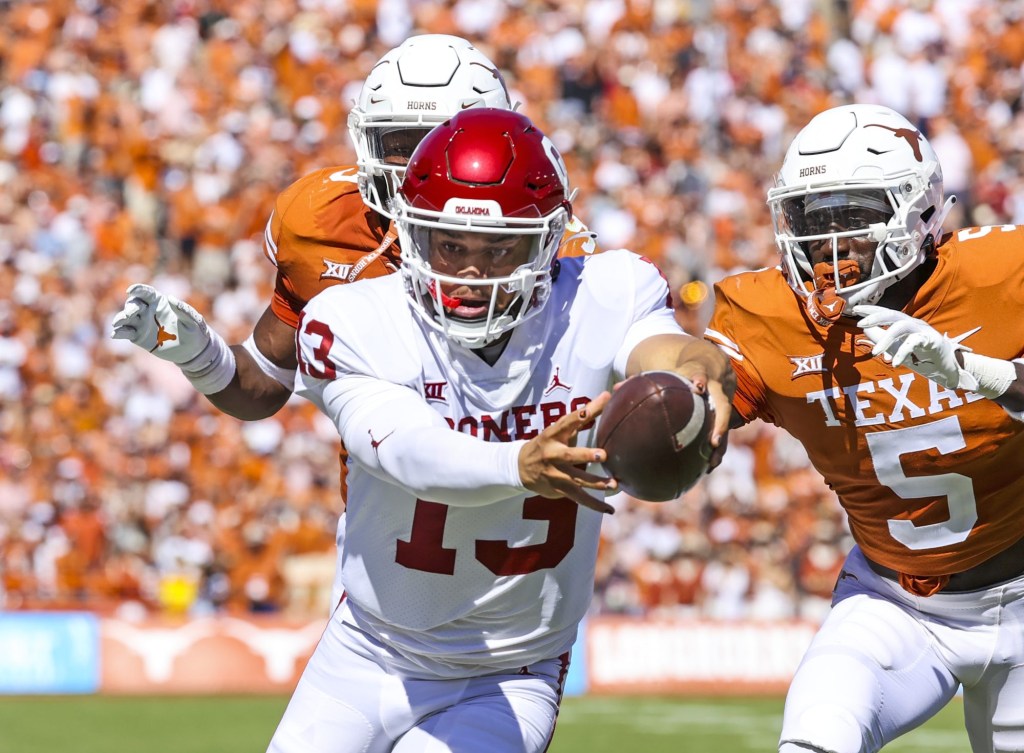 The highest-scoring game ever between the Red River rivals might have birthed a new star and relegated preseason Heisman Trophy hopeful Spencer Rattler to second string.

In Iowa City, No. 4 Penn State controlled the first half against the third-ranked Hawkeyes, but lost quarterback Sean Clifford to an undisclosed injury for the entire second half and couldn’t hold on without him.

Notre Dame started Jack Coan, switched to Tyler Buchner, and then went back to Coan after Buchner was hurt to rally for a win at Virginia Tech.

And, of course, Calzada, who led two late scoring drives against Alabama.

Oklahoma’s saga seems like something we have never seen before in college football.

Rattler came into the season as the presumptive Heisman favorite, a prospective first-round NFL draft pick and one of the most marketable players in the country in this first season that college athletes can be paid endorsers.

Last month, the third-year sophomore was given two cars by a local dealership as part of a deal for use of his name, image and likeness.

Rattler has cashed in off the field, but been only solid on it. Coming into the Saturday, he was completing 76% of his passes, with 10 touchdowns and four interceptions.

Rattler looked rattled against the Longhorns as Texas raced out to a 21-point first-quarter lead. 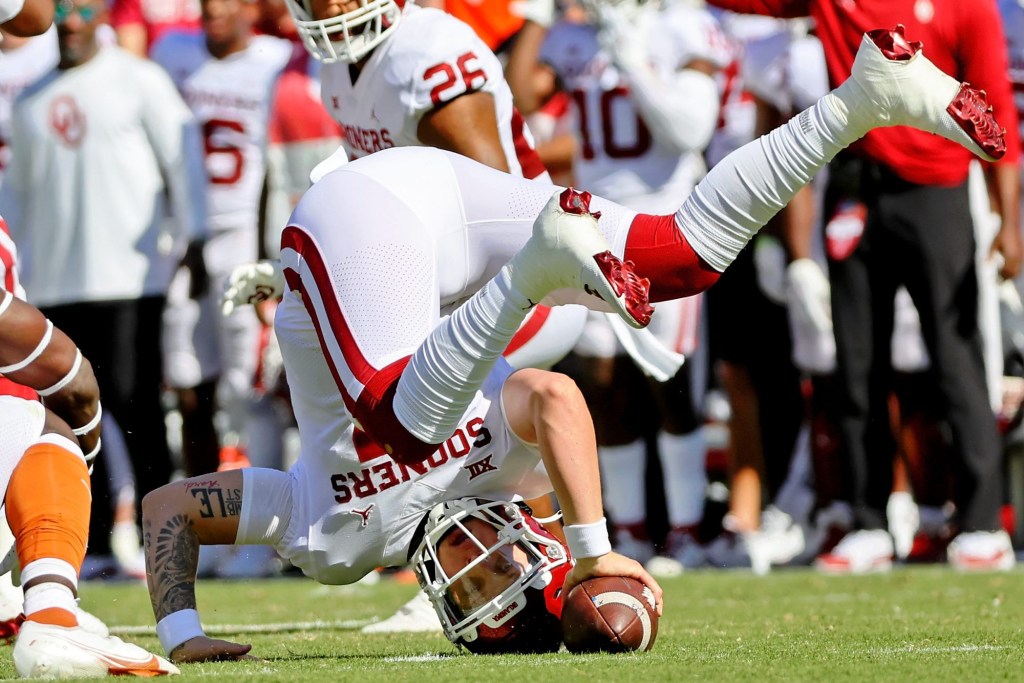 Williams is the five-star recruit from Washington D.C., who OU fans were chanting for a few weeks ago as the offense sputtered in a low-scoring home victory over West Virginia.

More of a dual-threat, Williams has been used to supplement OU’s offense, which has lacked explosive plays with Rattler.

Williams broke a 66-yard touchdown run the first half and then coach Lincoln Riley turned over the offense to him in the second half.

With Williams, the offense suddenly looked like recent units led by Heisman winners Baker Mayfield and Kyler Murray that put up video-game numbers.

Williams passed for 212 yards. He was spectacular at times and looked a little like a freshman in the biggest game of his life at other times.

But Rattler wasn’t done for the day. He came in on a 2-point conversion halfway through the fourth quarter and connected with Drake Stoops to make it 41-all. 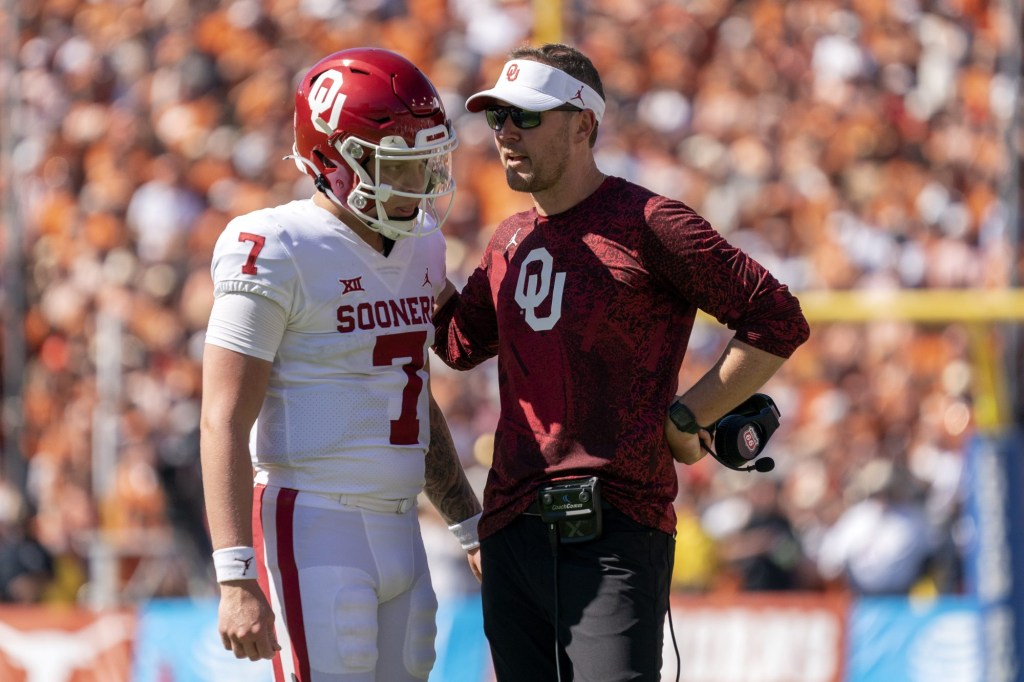 It appears Riley has a quarterback controversy on his hands for the first time in his career. After the game, he declined to commit to a starter next week against TCU.

He also declined to let Williams do a quick postgame interview with ESPN sideline reporter Holly Rowe. Riley’s policy is freshman don’t speak to the media, which seems even more silly in the day and age of NIL.

Having a quarterback capable of coming off the bench to win a game is becoming more rare in college football. Experienced players tend to transfer out, looking for playing time and leaving a lot of teams with backups that leave a lot to be desired.

Not everyone is as lucky as Oklahoma to have a player as good as Williams, who can make up for not knowing exactly what he is doing by being one of the most talented players on the field.

That was the case for Penn State. The Nittany Lions lost backup Will Levis to the transfer portal in the offseason. He is now the starter at Kentucky.

Penn State coach James Franklin tried to find a graduate transfer to fill out a thin depth chart, but was left with Ta’Quan Roberson behind Clifford. 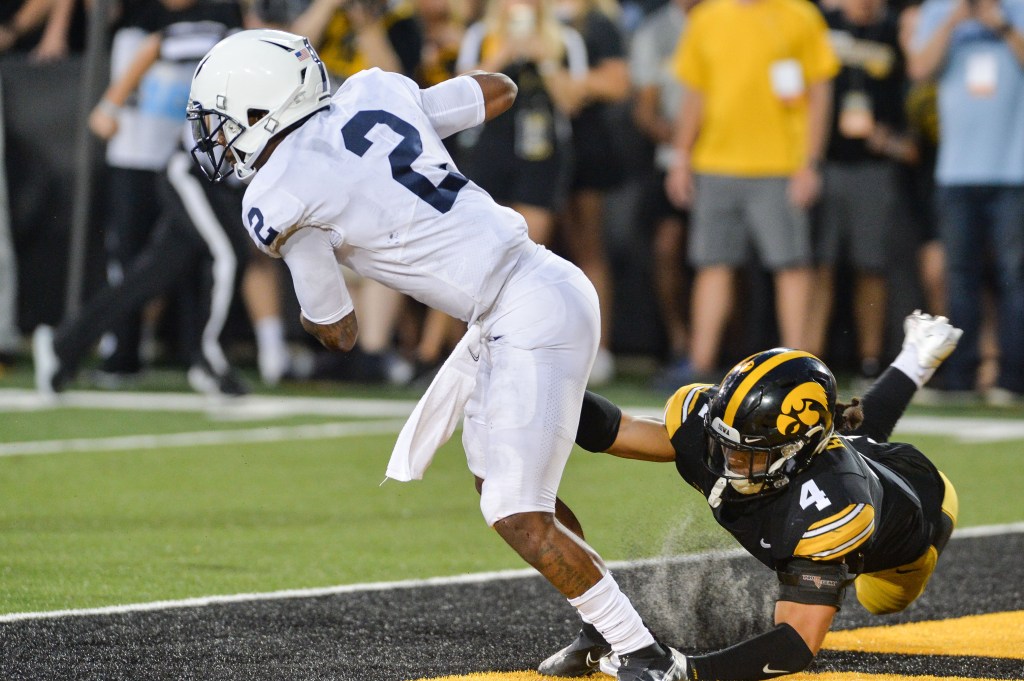 Roberson is a 5-foot-11 sophomore who was a borderline four-star prospect out of high school. Maybe in another setting, and not on the road against one of the best defenses in the country, Roberson could have managed the situation.

Against the Hawkeyes, Penn State could barely get a snap off cleanly and managed only three points in the second half.

“We didn’t have an issue with the crowd noise until we lost Sean,” Penn State coach James Franklin said..

Offense continues to be a grind for Iowa, but the Hawkeyes are unbeaten with nothing but Big Ten West opponents left on the schedule. If you haven’t noticed, outside of Iowa, there is not a ton to get excited about in the Big Ten West.

While Oklahoma deciphers which quarterback to play, Penn State will hope an open week followed by a trip to Illinois will be enough to get Clifford back to full health.

Games against No. 7 Ohio State, No. 9 Michigan and No. 11 Michigan State loom. With Clifford, the Nittany Lions are still Big Ten contenders.

Without him … maybe they could make a trade for Rattler?

Around the country: Now that Alabama’s record winning streak against unranked teams is over, the longest active streak belongs to Notre Dame at 36. … Another chance for a breakthrough victory slipped away from Nebraska against No. 9 Michigan. Scott Frost’s team is undeniably better than it has been, but he is 0-10 against ranked teams in four seasons at his alma mater … There has been a lot of justifiable love for Texas’ Bijan Robinson, but Michigan State’s Kenneth Walker III is probably the top Heisman contender among running backs right now. Walker had 233 yards, including a school-record 94-yard run, as the Spartans improved to 6-0 against Rutgers. … Among second-year coaches, only Michigan State’s Mel Tucker has done a better job of turning around a team than Baylor’s Dave Aranda. The Bears pounded West Virginia to improve to 5-1. … Encouraging sign for Tennessee in Year 1 under coach Josh Heupel: The Volunteers (4-2) have scored at least 40 points in back-to-back SEC games for the first time since 2016. .. We can put away all the “What if BYU goes unbeaten?” conversations after four turnovers against Boise State. … Most disappointing team in the country? How about preseason No. 10 North Carolina? Tar Heels coach Mack Brown is now 0-11 against Florida State. … On the other end of the ACC, No. 19 Wake Forest beat Syracuse in overtime to improved to 6-0 for the first time since 1944. … No. 16 Kentucky is 6-0 for the first time since 1950, when Bear Bryant was coach, after beating LSU. Things are moving in an ominous direction for Tigers coach Ed Orgeron.