‘And Just Like That’: Sarah Jessica Parker returns to set for Season 2 Sarah Jessica Parker, who plays the infamous Carrie Bradshaw in the “Sex and the City” fanchise, was spotted on the set of “And Just Like That” on Wednesday alongside her co-star Kristin Davis.

Dolled up in her iconic Christian Dior gladiator heels — a throwback from the first “SATC” movie over two decades ago — Parker’s fit was true to her stylish character, denim jumpsuit and all.

She shared a photo on Wednesday morning, debuting her feet clad in the jet black pumps, which were paired with silver socks and a silk Fendi anklet-bag.

“@justlikethatmax First exterior. Streets of NY. X, SJ,” the caption read on the snap, which also featured a faux pigeon on the floor next to her feet.

New production on Season 2 comes just after news broke that John Corbett would reprise his role as the beloved Aiden, one of Carrie’s old SATC love interests. Parker hinted at the character’s reappearance in an interview with Entertainment Tonight after being questioned about it.

Then, last month, Deadline reported that Corbett’s role would be more than guest starring — suggesting that Aiden would have a “substantial, multi-episode arc.”

The forthcoming second season is about “resilience and rebound and laughter,” Parker shared with ET, despite critics begging for the rebooted television series to come to an end.

In the first season of “And Just Like That,” series stans probably got more than they bargained for: Miranda’s newfound interest in women, Big’s heartbreaking death and, of course, the people couldn’t get enough of Che Diaz, played by Sara Ramirez. 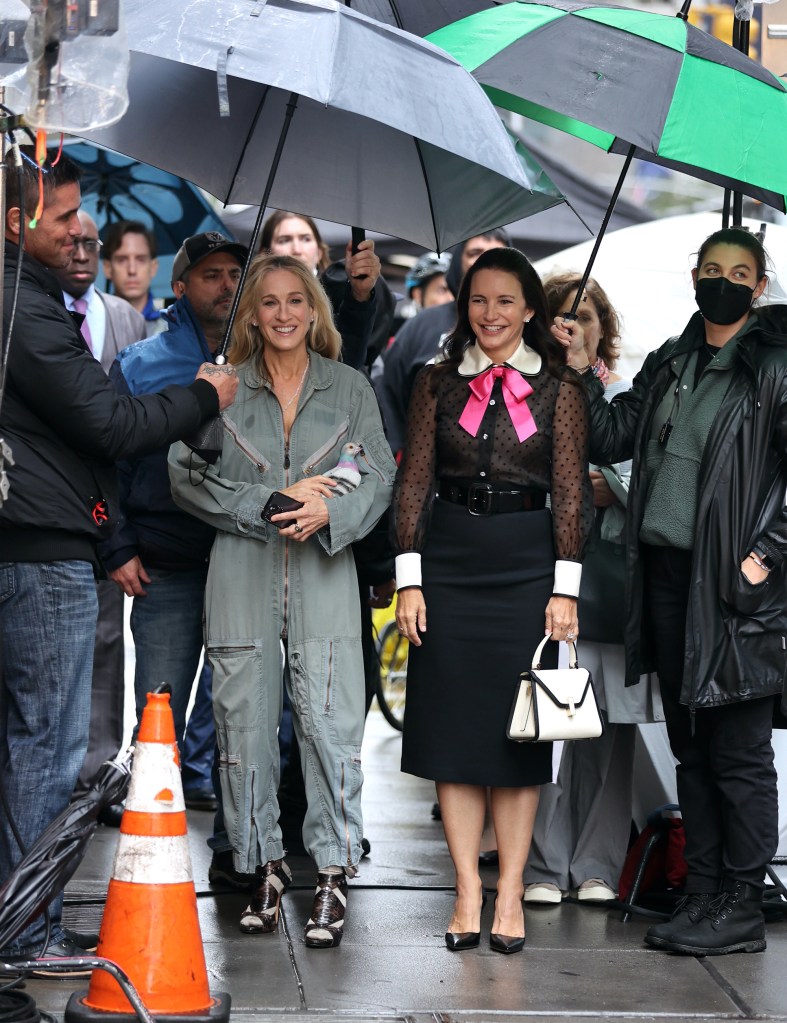 Parker and Davis were spotted on set of “And Just Like That” Wednesday morning.Jose Perez / SplashNews.com

Before it even hit HBO Max, the series garnered quite a bit of buzz. Namely, that the iconic Samantha Jones, played by Kim Cattrall, would not return. She blamed the plot as the reason for her indefinite departure from the series, claiming it was “basically the third movie” of SATC that never hit screens.

“I was never asked to be part of the reboot,” Cattrall said in an exclusive interview with Variety. “I made my feelings clear after the possible third movie, so I found out about it like everyone else did — on social media.”

While fans of the on-screen sexpert were devastated, Cattrall said she was “done,” and has made it clear she would never be open to returning, even for a brief cameo. Although, in Season 1, the writers attempted to keep her alive via cryptic text messages to Carrie.

So, viewers can’t help but wonder: what’s next in store for the trio?

Ultimately, the audience was left on a cliffhanger — Miranda is chasing Che to Los Angeles, and Carrie planted one on her co-worker Franklyn, played by Ivan Hernandez.

“I am delighted and excited to tell more stories about these vibrant, bold characters – played by these powerful, amazing actors,” the series’ executive producer Michael Patrick King said in a previous press release. “The fact is, we’re all thrilled. ‘And Just like That…’ our Sex life is back.”