With the previously perfect Yankees superstar Aaron Judge stuck on 60 home runs for five straight games now, the patient Judge and Maris families will all need to gather their vaccination cards and passports. The Judge Homer Anticipation Tour heads to Toronto for three games.

This is not like Judge. The flyballs he was hitting before were clearing fences by 50 feet. Now, even when he hits them hard, they stop well short.

The superman on the precipice of a Triple Crown (he leads all three categories now!) as well as the real, honest-to-goodness home run record hit a flyball 113 mph the other day, and it didn’t even come close to leaving the yard. Teammates were stunned. Was it the wind? The cooler temperature? Divine intervention?

A simpler explanation, and until now there was no hint of this, is that Judge may be human.

It’s human nature. And it turns out, Judge may be like the rest of us. A little anyway.

“Most definitely he has been pressing,” a National League scout said before Sunday night’s game, which was called after six innings, a 2-0 Yankees victory that dropped their magic number to two. “With all his friends and family here, that puts a lot of pressure on him. Tough duty, but I’m sure he’s glad to be in it. He’ll get it when he’s not pressing or trying so hard.” 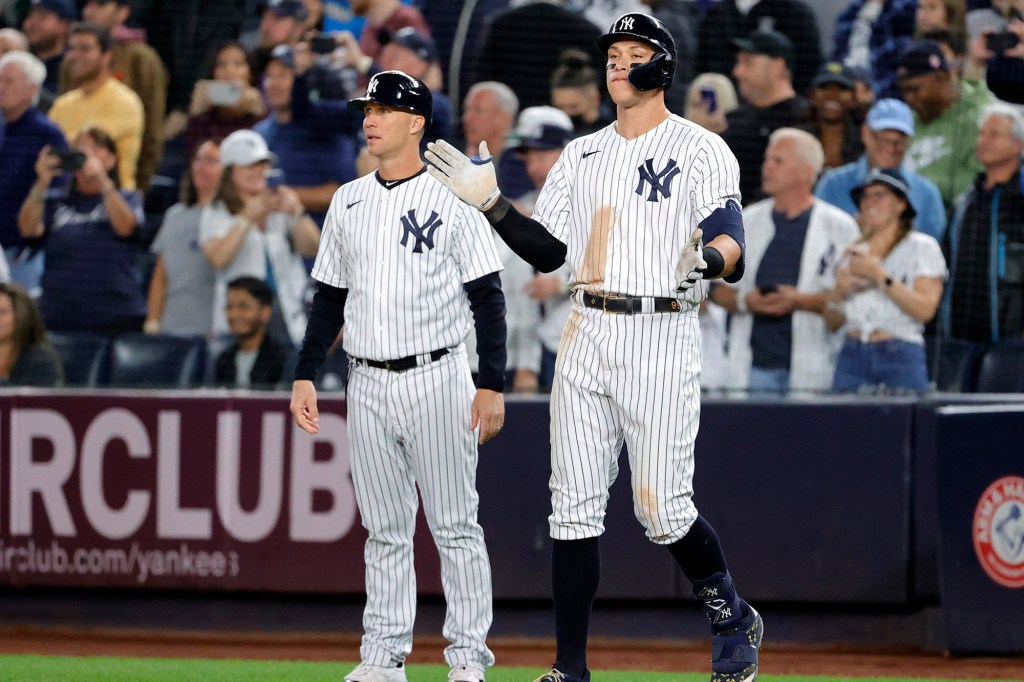 Oh, he’s going to get it, not just because there are 10 games left, and his longest drought of this magical season of his was nine. Better still, he seems very relaxed now.

If I were a betting man, I’d say he parks one soon. I’d also bet he was just a bit tense about doing it at Yankee Stadium.

The other explanation, promoted by a couple of Yankees, was that pitchers were avoiding throwing strikes. He did walk six times in the five games, but Red Sox starters Rich Hill and Nick Pivetta came after him.

“I would not pitch around him. That wasn’t an option,” Hill said. “I don’t believe in it. Why we’re here is for the competition. You put it on the line and risk failure every time. He’s doing it as well. People are paying their hard-earned money and want to see Judge challenged.”

If he wound up a footnote to history, as Tracy Stallard did 61 years ago on Maris’ historic 61st homer, so be it, Hill said.

More likely, it was a rare appearance of nerves for the league’s certain MVP. Even if you’ve played through the pressure of your contract and your future all season, as he has, it’s different when all eyes, and all cameras, are on you.

The five-day mini “slump” through Saturday may be the first sign he isn’t perfect, and it wasn’t even a slump like most folks’ slumps. He had a .476 on-base percentage during the five-game respite into reality. So if it wasn’t Judge on a homer history tour, no one would have noticed.

But folks close to the game did notice. And even though no Yankee would admit it, things seemed slightly off. One other baseball person detected a slight tilt in his swing skyward. Could he have been trying, subconsciously, for a long ball? 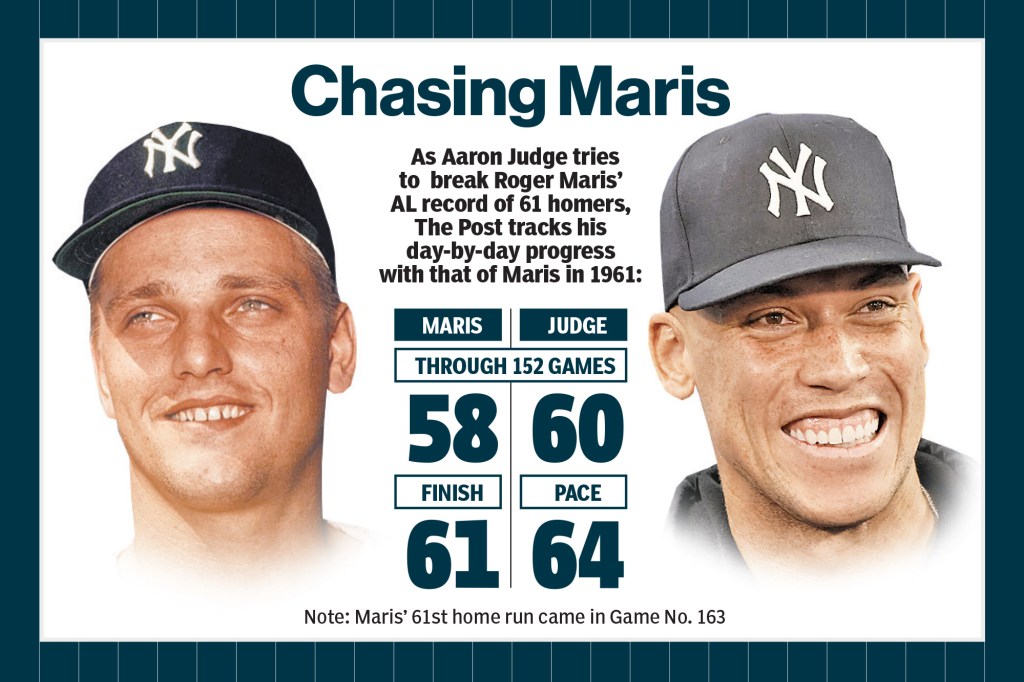 Maybe. But something changed Sunday, when Judge was as joyous as ever. He signed autograph after autograph down the right-field line pregame. He looked like himself, which is to say he was having fun.

Judge was back in the clubhouse pregame after a couple days away, and welcomed reporters one by one to ask him about the chase, his psyche, his nerves, anything. He did so with a smile, usually a wink, and sometimes a hand shake. He was back. 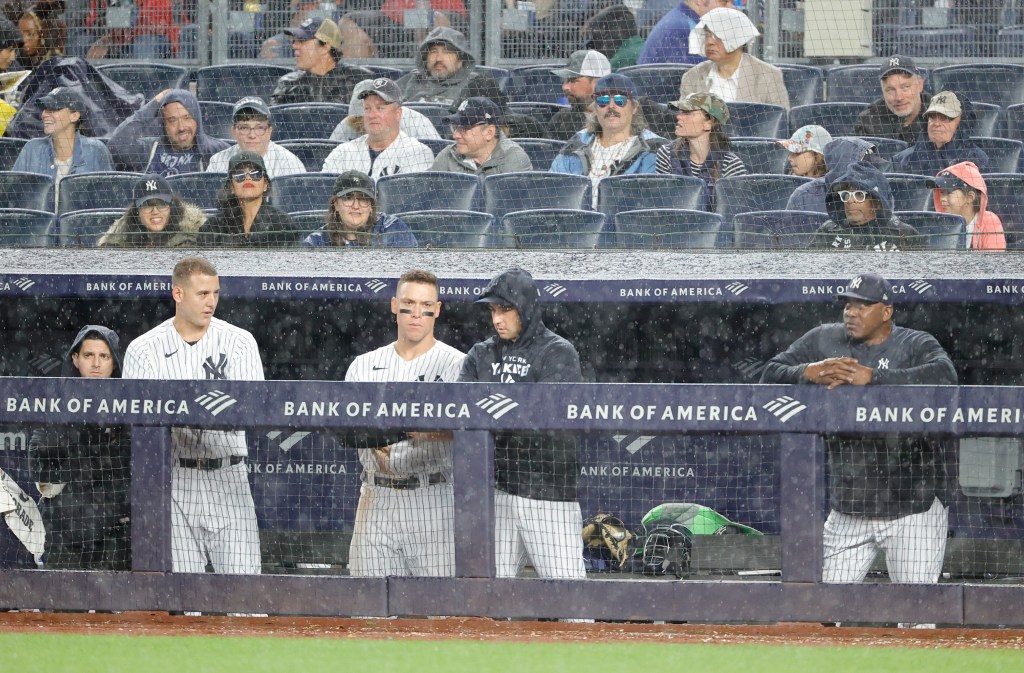 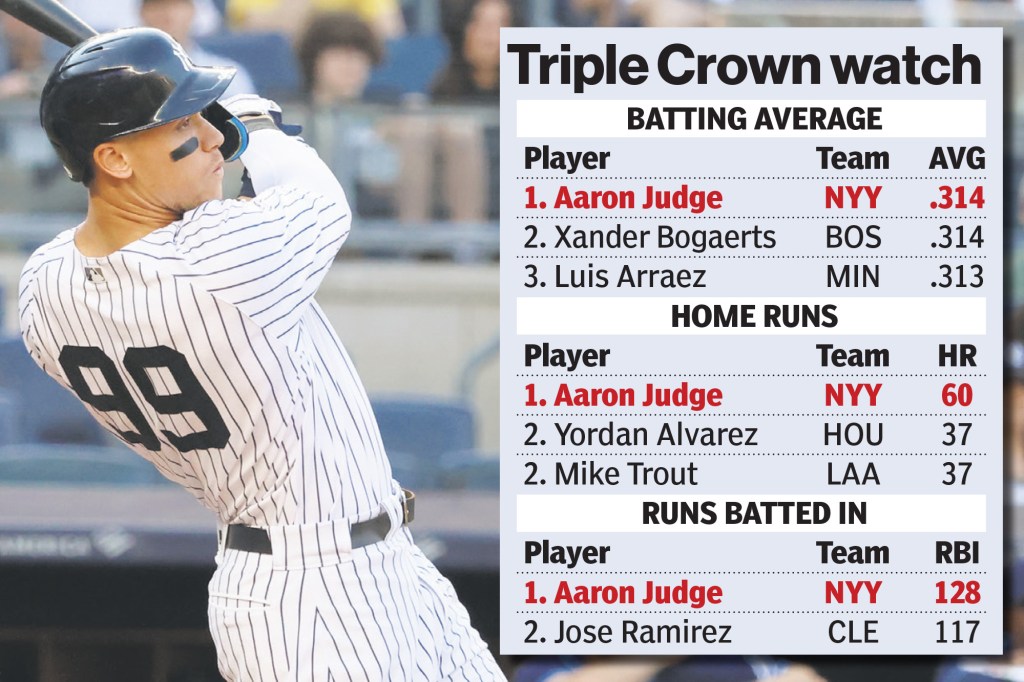 Yes, he’s noticed all the noise. Sure, he’s seen the umpires put the balls marked by history into play. Of course, he’s observed the fans with their camera phones trained on him. He’s probably even detected all the home folk in the box, waiting and wishing for history.

“I’m not blind,” he told The Post before flashing his trademark smile. “I see them changing out the balls. When it comes down to it, you’ve still got to compete and play the game. You can’t really get caught up in all the noise. I’ve been in this stadium … playoff games, people on their feet, late in games, high-pressure situations … It’s just another day.”

Well, we would see about that.

The game began, and he showed signs of being himself. He lined a double past the third-baseman to start off the Yankees first, and the crowd loved it, even though an at-bat was in effect wasted. He walked and flied out to center his next two at-bats.

Then the rains came, and that wait began. The game was eventually called off, and the real wait — the one for history — continues. Mets’ Max Scherzer ‘building back up’ in other...