ST. PETERSBURG, Fla. — After trailing until the eighth inning on Wednesday night, the Yankees were on the verge of doing something unthinkable: losing a second straight game.

But they reverted to 2022 form in the eighth, as Jose Trevino continued to surprise with his bat, hitting a go-ahead two-run homer in a 5-4 win over the Rays at Tropicana Field.

Michael King and Clay Holmes made the lead hold up and the Yankees avoided dropping consecutive games — which they still haven’t done since losing back-to-back games here May 28-29.

Aaron Judge hit two more homers and now has an MLB-high 27 as he gets ready for Friday’s scheduled arbitration hearing and the Yankees kept pace with the 1998 team, improving to 51-18, tied for the third-best start in franchise history.

The comeback overshadowed a rare off night for Jordan Montgomery.

In his first start against Tampa Bay this season, the left-hander allowed a season-high four runs — and two homers — in six innings. 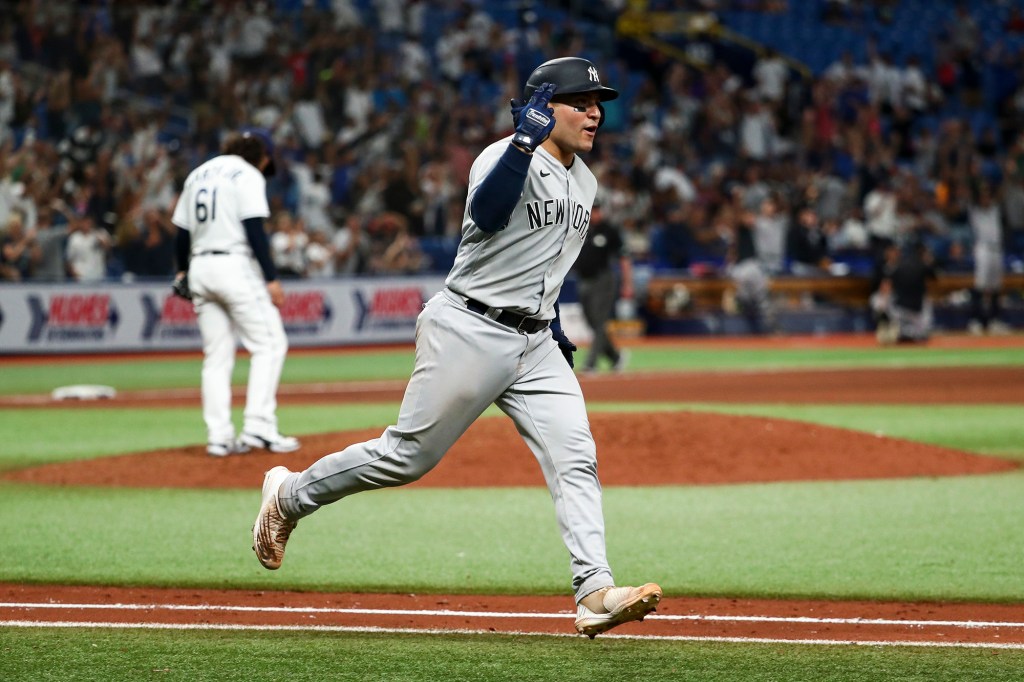 He’d become just the second starting pitcher in franchise history to allow three or fewer runs in each of his first 13 starts to begin a season, joining Ron Guidry, who did it in his first 15 starts in 1978.

New Yankee-killer Isaac Paredes, fresh off a three-homer night on Tuesday, started the bottom of the second with another home run to put the Yankees in a 1-0 hole.

After Josh Lowe singled with one out, Vidal Brujan crushed a two-run shot to left-center to give the Rays a 3-0 lead.

The Yankees’ offense took longer to get going.

DJ LeMahieu led off the game with a single to center and right-hander Shane Baz — coming off six shutout innings against the Orioles in his second start of the year — then retired nine in a row until Judge opened the top of the fourth with a homer to left. 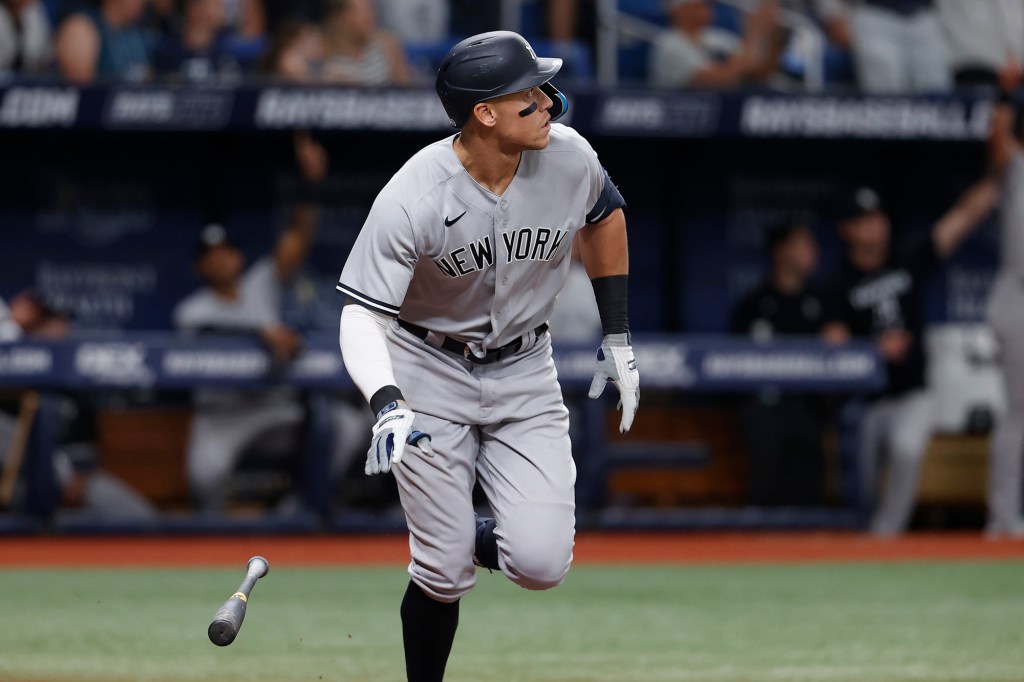 Aaron Judge hits one of his two home runs during the Yankees’ win over the Rays on Wednesday.AP

The Rays added a run in the bottom of the fourth when Francisco Mejia doubled to lead off, moved to third on a Lowe fly ball and scored on Brujan’s chopper to shortstop.

They loaded the bases later in the inning, but Trevino bailed out Montgomery by picking off Taylor Walls at third to end the inning.

The Yankees loaded the bases with one out in the fifth. Trevino singled and Joey Gallo and LeMahieu walked to bring up Judge. Judge took Baz to a full count, but Baz got him swinging on a curveball.

Left-hander Brooks Raley entered to face Rizzo and got the DH to hit a liner to second, which was nabbed by Paredes.

An error by Tampa Bay got the Yankees closer with two outs in the sixth. With Giancarlo Stanton at second and Matt Carpenter at first, Trevino hit a routine grounder to short, but Walls bounced the throw to first and Ji-Man Choi couldn’t come up with it, which allowed Stanton to score and make it 4-2.

A walk by Gallo loaded the bases for LeMahieu, who popped out.

Judge got the Yankees to within a run with his second homer of the night to open the top of the seventh off Colin Poche. 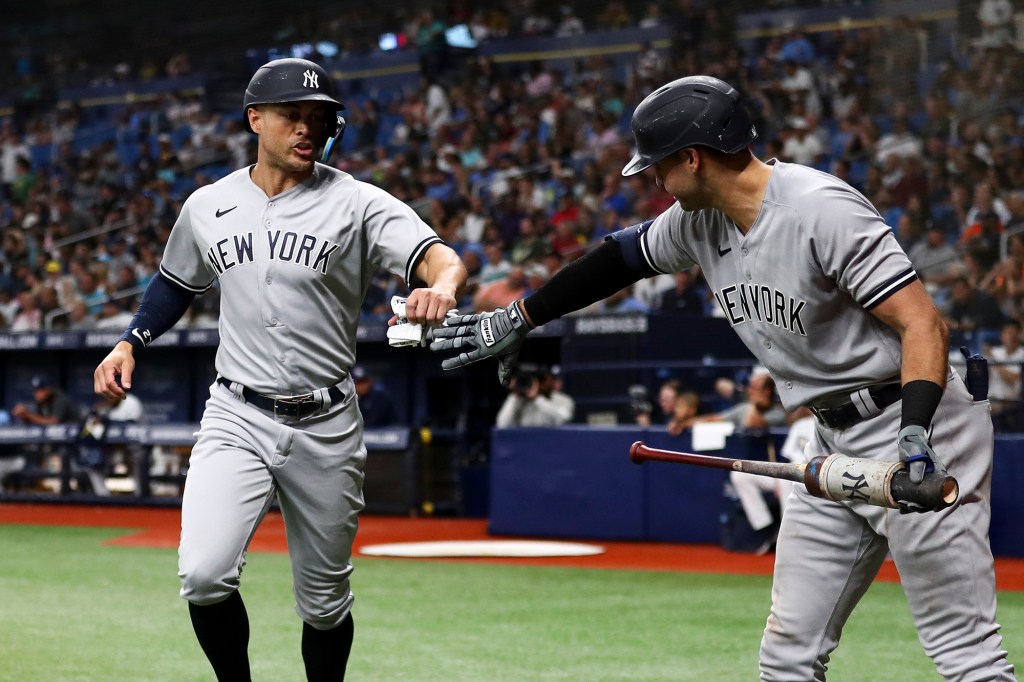 Giancarlo Stanton celebrates scoring a run in the Yankees win over the Rays on Wednesday.Getty Images

Tampa Bay’s relievers, who pitched well in a bullpen game in their win on Tuesday, were put to the test again Wednesday.

And when manager Kevin Cash went to Ralph Garza Jr. to start the eighth — the Rays’ seventh pitcher of the night after they used the same number on Tuesday — he ran out of luck.

Isiah Kiner-Falefa walked and Trevino followed with a two-run homer to left, his sixth of the season, to give the Yankees their first lead of the night.

Clarke Schmidt pitched around a leadoff double in a scoreless seventh and King and Holmes tossed scoreless innings, with Holmes picking up the save.