‘A Beautiful Noise, the Neil Diamond Musical’ review: Awful Broadway show is on the rocks “A Beautiful Noise, the Neil Diamond Musical,” which creaked open Sunday night on Broadway, begins in the most sedate and uninvolving manner imaginable. The lights come up on a plain-looking therapy session and the titular musician, now in old age (Mark Jacoby), sits opposite a woman in a red leather armchair.

Diamond, not offended, then whips out his handy dandy songbook, cracks it open and explains who he is through his tunes.

That is a confounding way to start a show that ticket buyers have come to see, I would assume, because they are big fans of Diamond’s popular catalogue. But “A Beautiful Noise” is one off-key moment after another.

Just wait till you get to the repressed memory childhood flashback in Act 2, set to the songs “Brooklyn Roads” and “Shilo,” in which nothing perceivable happens.

Or the two singalongs, to “Song Sung Blue” and “Sweet Caroline,” that, at my performance anyway, prompted very little singing along. 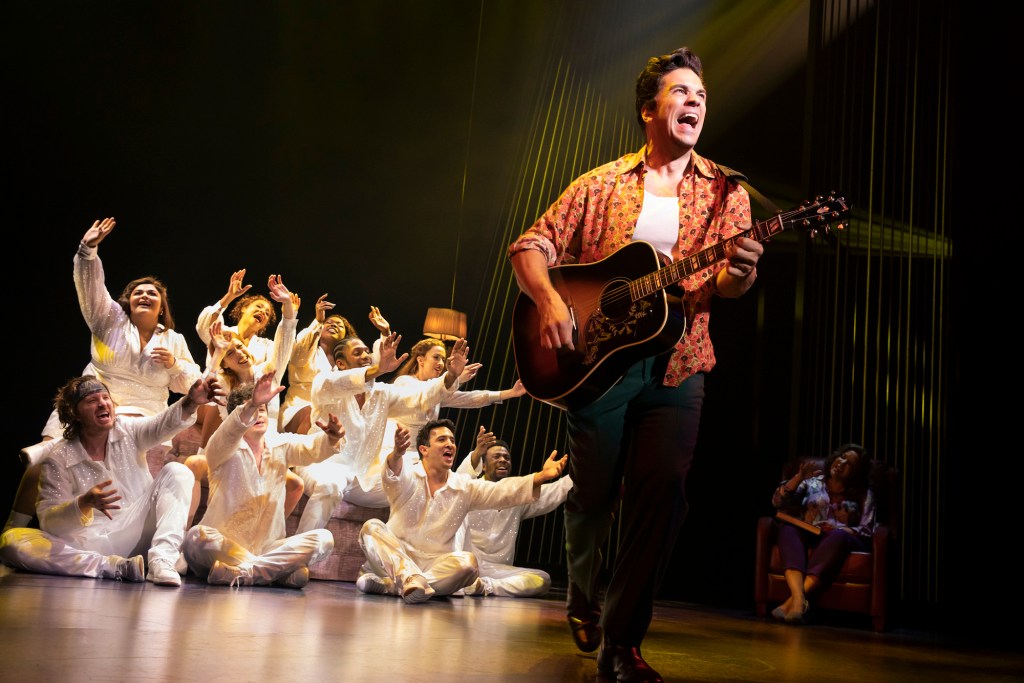 Will Swenson plays Diamond in “A Beautiful Noise” on Broadway.Photo: Julieta Cervantes

At first the musical follows the usual jukebox musical formula, straightforwardly depicting a young Brooklyn-born Diamond (Will Swenson) playing guitar at the Bitter End rock club on Bleecker Street and being discovered by record producer Ellie Greenwich (Bri Sudia). His nascent career is not unlike Carole King’s. (Don’t misunderstand me — “Beautiful: The Carole King Musical” is an infinitely superior show.) He writes hit songs for other more famous artists to sing, such as “I’m a Believer” for the Monkeys.

When he leaves his first wife Jaye Posner (Jessie Fisher) for Marcia Murphey (Robyn Hurder), his new girl encourages him to actually perform his compositions in his pleasantly gravelly voice. And the Diamond we know today is born.

Posner, in one of the occasional moments a character uses a song to express their feelings, sings “Love on the Rocks” as her marriage crumbles. But all the onstage drama is mistakenly calm, so such should-be emotional moments are burdened by indifference. The plot boils down to two relatively amicable divorces and some signed contracts. 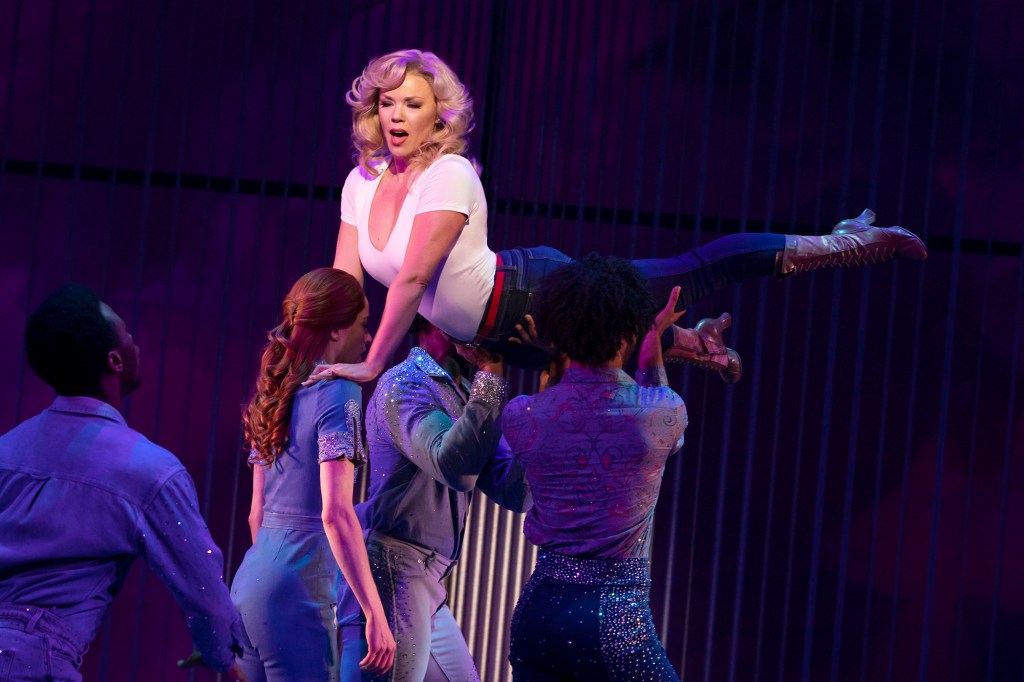 Hurder brings a burst of vivacity as Murphey, and nails “Forever in Blue Jeans.” Why Murphey sings it, however, I couldn’t tell you.

Act 2 is a mostly incomprehensible fusing of events with the basic takeaway that fame is hard. Diamond tours the world, his hair gets bushier and his outfits shinier. His star status strains his relationship with Murphey, and Swenson and Hurder duet on “You Don’t Bring Me Flowers.”

Steven Hoggett’s choreography gets more spirited during the concerts, yet all the bouncing around is unpleasant to look at — like live bait wriggling on a hook. At other times he has the cast make obnoxious “Walk Like an Egyptian”-esque hand gestures.

The backdrop for the go-go-gone-wild movement and Michael Mayer’s saltine-cracker direction is David Rockwell’s set of panels made of taut parallel strings that look great at Nobu — not in a Broadway musical. The scenery does not easily morph into the variety of locales the decades-spanning story requires it to. 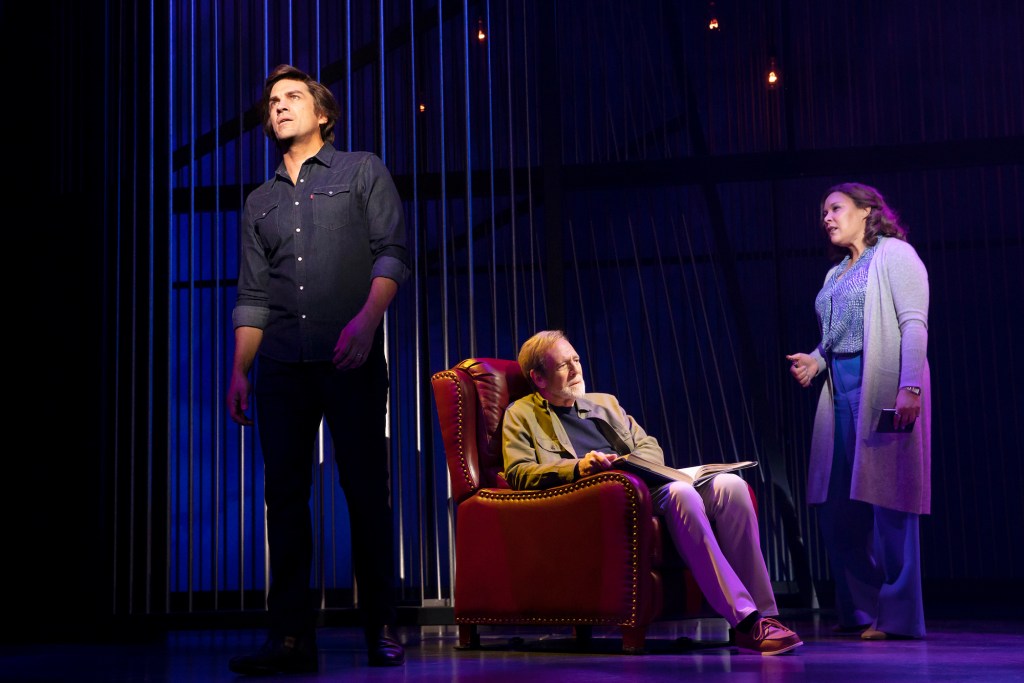 At least the omakase-style decor is elegant. Clunkier are the ugly old therapy armchairs that often flank the stage as the doctor and older Neil observe past events like he’s Scrooge in “A Christmas Carol” a few blocks away. The lazy frame story is absolutely deadly.

Still, of the two men who play Diamond, it’s Jacoby who is the better actor — even if he’s saddled with some abysmal dialogue — and who owns the most exciting musical moment of the night when he croons “I Am… I Said.” 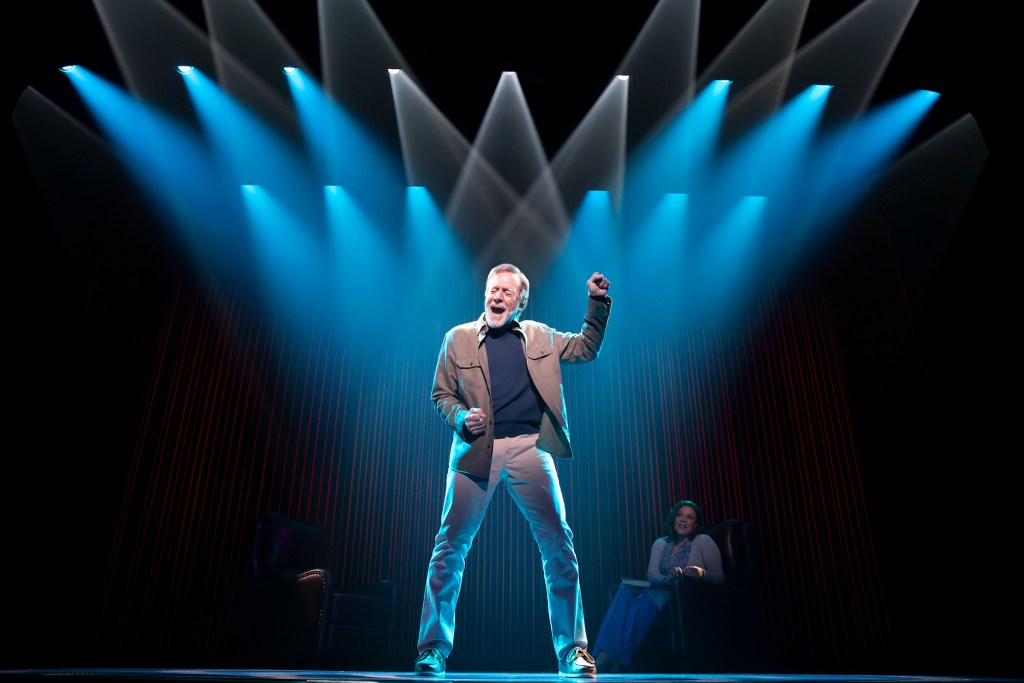 Mark Jacoby has the show’s best musical moment when he croons “I Am … I Said.” Photo: Julieta Cervantes

Jacoby summons a superstar rocker energy — even retired and in a boring gray sweater — that Swenson cannot muster. Usually it’s the lead performances that redeem and lift these soulless musician MadLib shows. Unfortunately, Swenson makes no impression and we’re left feeling as though we got to know nothing about the inner life of a prolific and ingenious singer-songwriter.

“A Beautiful Noise” ends with a second singalong of “Sweet Caroline” — an experience you can get every single night at any bar in New York that serves beer. And it’s there, not on Broadway, where you’ll really feel Diamond’s legacy reaching out, touching me, touching you. Nets unable to stop Jaylen Brown as loss to...