7 weather extremes that will impact NFL games this season Football season is almost here, and that means millions of fans will brave extreme weather to watch their favorite NFL team try to bring home a victory.

Through extreme heat, frigid cold and everything in between, the league is notorious for playing through some brutal weather conditions.

If Mother Nature sticks to the normal playbook, meteorologists already have a good sense of which games could be the coldest, warmest, windiest and even snowiest.

Here are the seven games to watch during the 2022-2023 NFL regular season.

After many sweltering preseason games, the first matches of the regular NFL season will kick off in early September.

If Mother Nature sticks to what is usually seen during the first month of metrological fall, Glendale, Arizona, will be home to the warmest NFL game of the season.

The Chiefs are scheduled to take on the Cardinals at State Farm Stadium on Sunday, September 11.

Days in the desert Southwest are typically warm with highs that reach the low 100s.

But if you are a fan, don’t worry about seating and sweating in the extreme heat.

Glendale’s stadium has a retractable roof that is usually closed, and there is typically plenty of air conditioning blasting in the arena. 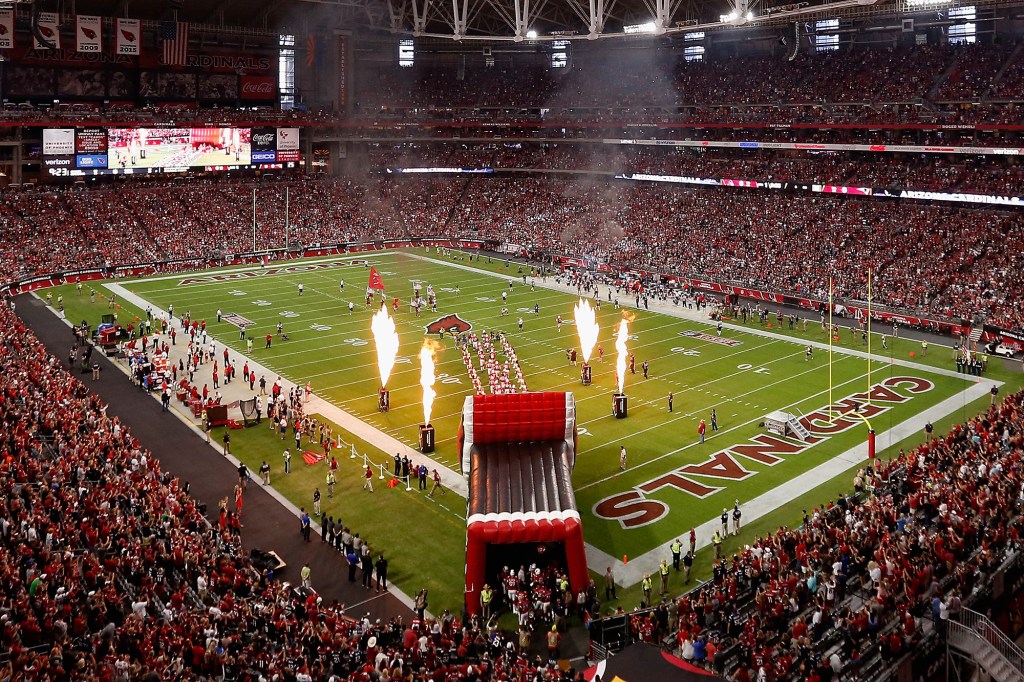 Days in the desert Southwest are typically warm with highs that reach the low 100s.Christian Petersen/Getty Images 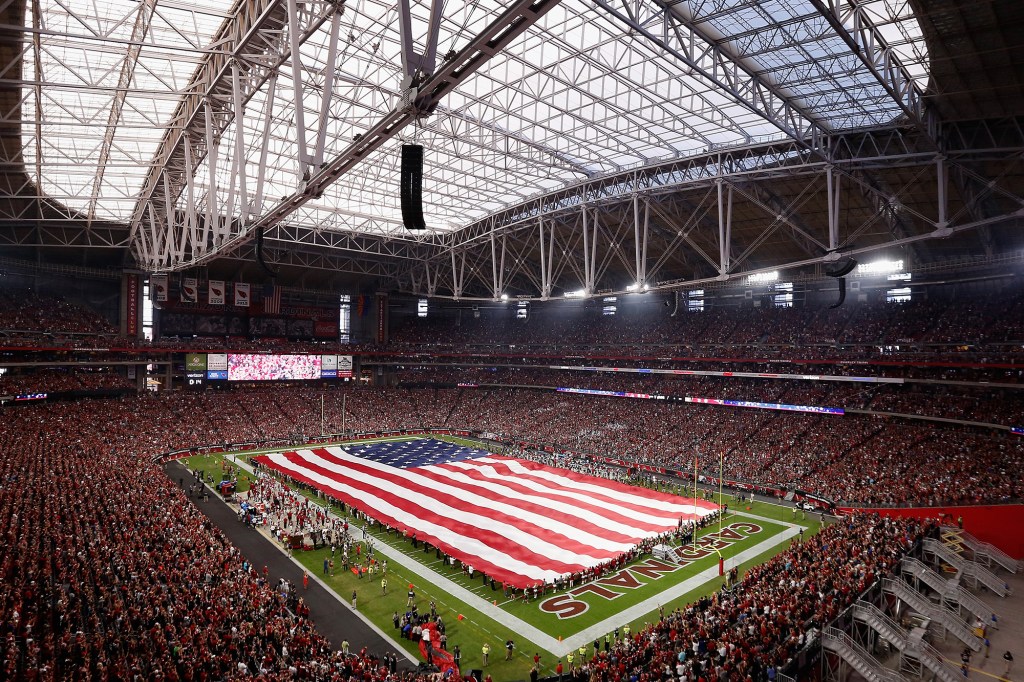 State Farm Stadium has a retractable roof that is usually closed.Christian Petersen/Getty Images

A game site that does not have the choice of closing its roof is Hard Rock Stadium in Miami Gardens, Florida.

The Patriots will take on the Dolphins on the same day as the match in Arizona, so the game in the Sunshine State will be in the running for potentially having the hottest on-field temperature.

An average high in South Florida usually reaches near 90 degrees, which does not take into account humidity or the impact of pavement absorbing and emitting some of the heat. 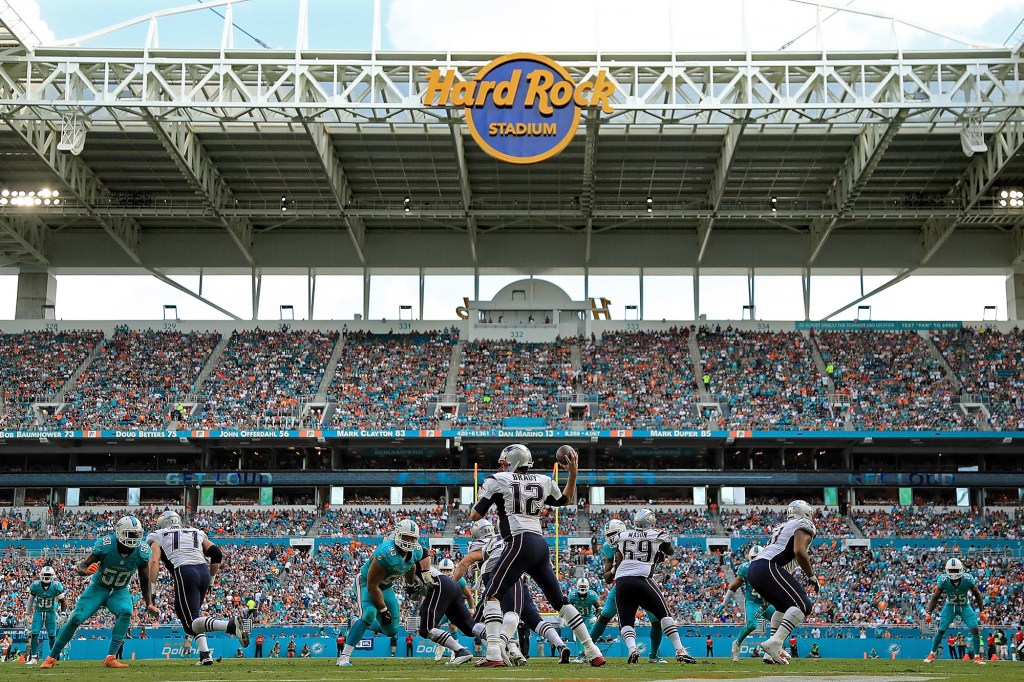 Hard Rock Stadium does not have the option of closing its roof on hot days.Mike Ehrmann/Getty Images 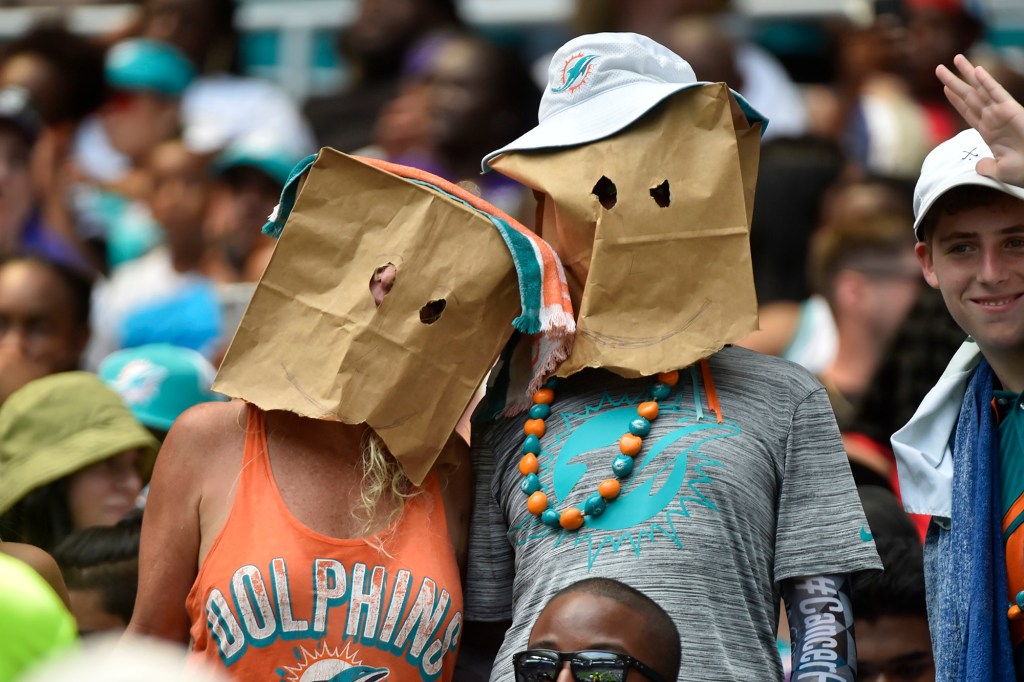 The Patriots vs. Dolphins game will be in the running for potentially having the hottest on-field temperature.Eric Espada/Getty Images

The coldest game appears destined to be at Lambeau Field when the Detroit Lions take on the Green Bay Packers during the final week of the regular season.

The NFL is still working out timing, but it appears the game will take place during the first two weeks of the new year.

According to climate data, a typical early January day in Green Bay sees a low of around 12 degrees and a high that only reaches the mid-20s. 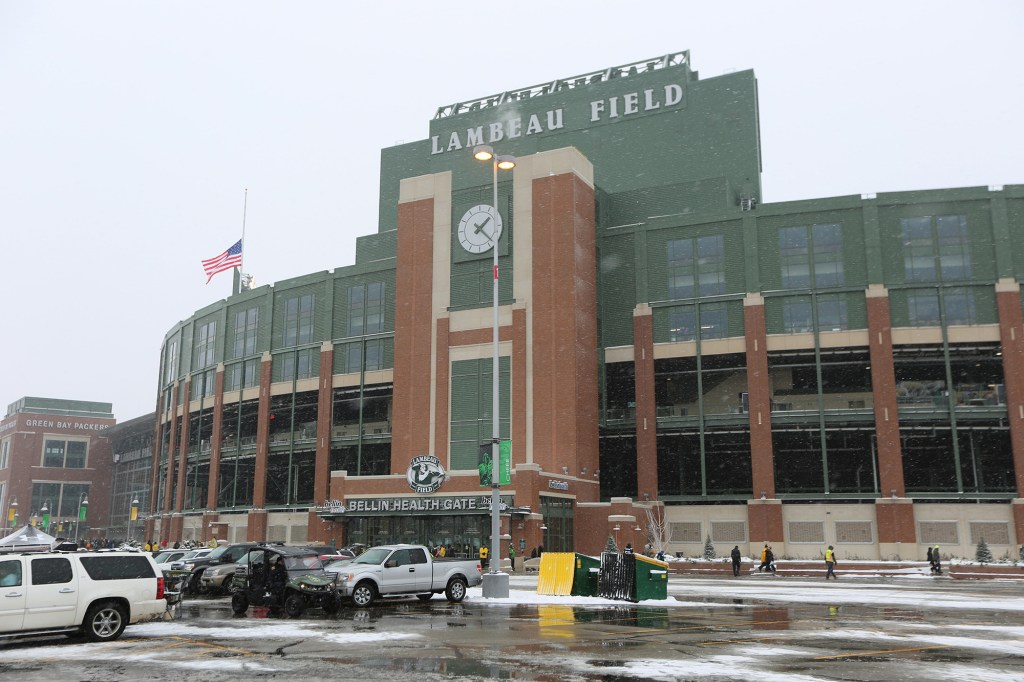 A typical early January day in Green Bay sees a low of around 12 degrees and a high in the mid-20s.Larry Radloff/Icon Sportswire via Getty Images

Depending on which large-scale weather features are in control, it is not unheard of for temperatures to never get above zero and for lows to be colder than -20 degrees.

The cold air temperatures don’t take into account a potential wind chill that could make prolonged exposure to the elements even more dangerous.

If the showdown between the Patriots and the Dolphins on September 11 is not the warmest, it could be because of afternoon thunderstorms.

The almost daily occurrence of wet weather could make the South Florida game the rainiest of the year.

Mainly because of the storms, no other city hosting NFL games sees as much rainfall as Miami. 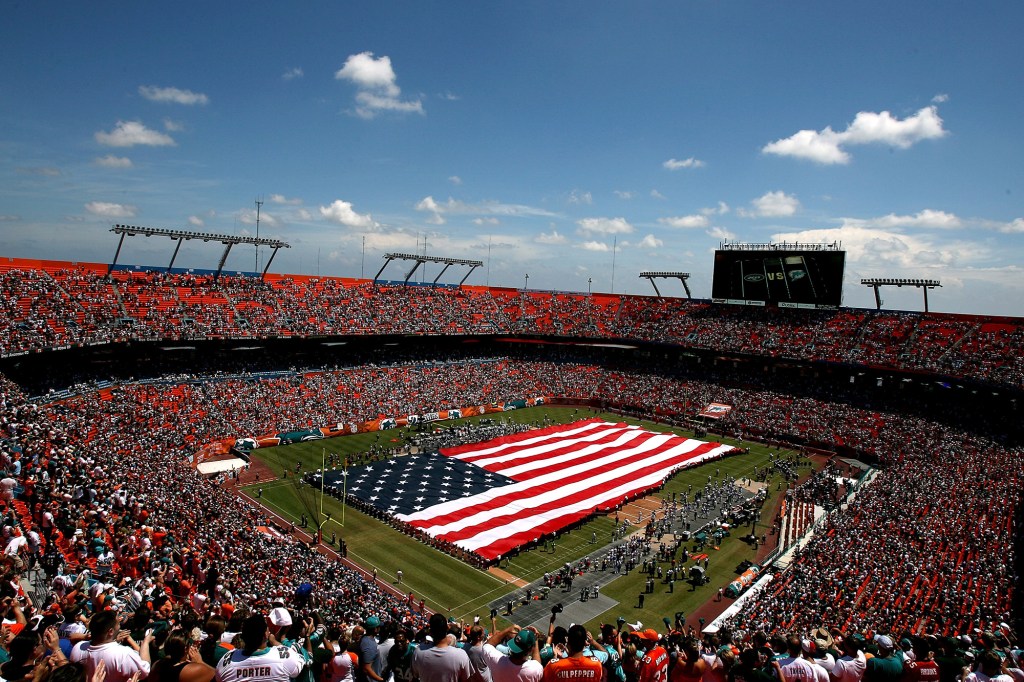 The metro area averages more than 60 inches of rainfall a year, and an early September day could see around a third of an inch of precipitation.

Unfortunately, the rain usually comes from storms, which tend to produce plenty of dangerous lightning.

Hard Rock Stadium says when lightning is detected in close proximity, they encourage the public to seek shelter, and they suspend game operations.

If average weather plays out, get out your anemometer ready for the January 1, 2023, meeting of the Dolphins and Patriots.

According to NOAA data, winds average 12.6 mph in eastern Massachusetts during the first month of the year.

Winds not only have a significant impact on the kicker’s ability to get the ball through the uprights, but the force of Mother Nature can also impact the betting line before the teams even see the field.

Chicago’s claim to fame of being the “Windy City” doesn’t hold weight during the early new year, as cities such as Buffalo and New York tend to have higher wind speeds.

Cold weather fans might have to wait until the last week of the regular season to see the snowiest games.

While the NFL is still figuring out the times and dates for the last matches, weather almanacs do give us a sense of what to expect.

If Old Man Winter holds true to his norms, the playoff rematch of the Patriots versus the Bills could have the most snow on the ground. 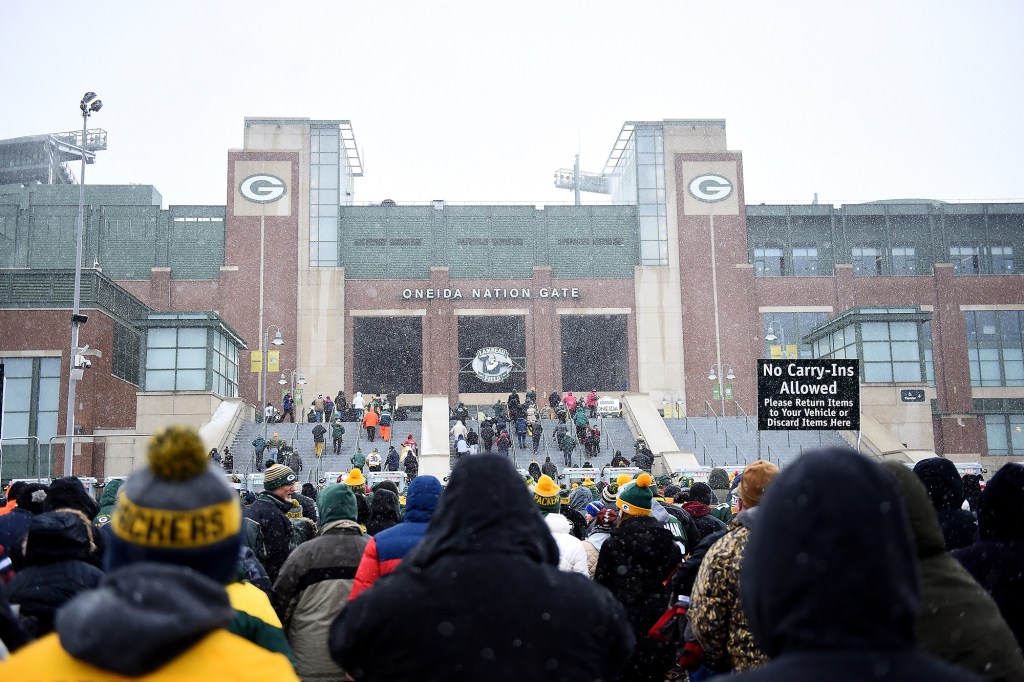 Fans walk into a snowy Lambeau Field before a game.Stacy Revere/Getty Images 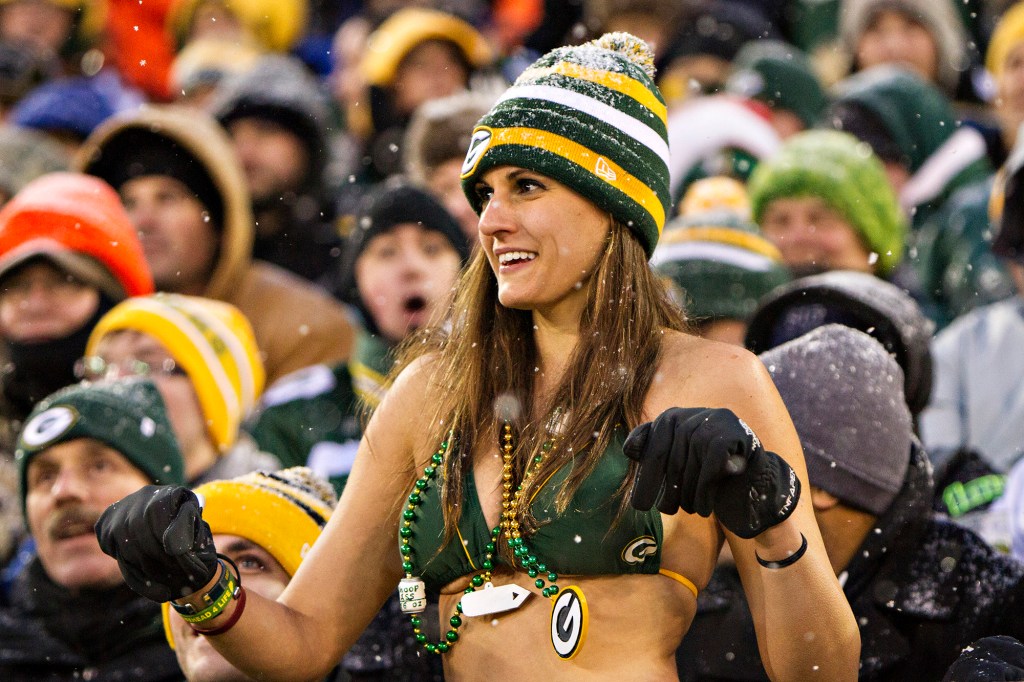 Games in Chicago, Green Bay and Denver have a likelihood of seeing snow.Wesley Hitt/Getty Images

Buffalo, New York, averages just shy of an inch of snow per day during early January.

The region ranks ahead of cities such as Chicago, Green Bay and Denver, which will also be hosting games, with a likelihood of seeing snow.

First game of year under the night’s sky

The first game of the year that will kick off after sunset and isn’t under a covered by a roof with lights will be the match between the Bears and Packers on September 18.

The Sunday night game will start at 7:20 p.m. CDT, which is about 24 minutes after sunset.

As the season progresses, more and more games will kick off without sunlight because of the shortening of days between the summer and the winter solstices.

The subtle change in light may have more of an effect on the body than meets the eye.

Medical experts say a change in light and time can affect a body’s circadian rhythm.

A study published in the National Library of Medicine found that football players who can control their sleeping patterns had an advantage during games.

Believe it or not, the human body is impacted by elevation, and in the 2022 – 2023 season, a couple of sites may play a role in which team becomes victorious.

A game to keep an eye on will be the November 21 match between the San Francisco 49ers and the Arizona Cardinals in Mexico City. 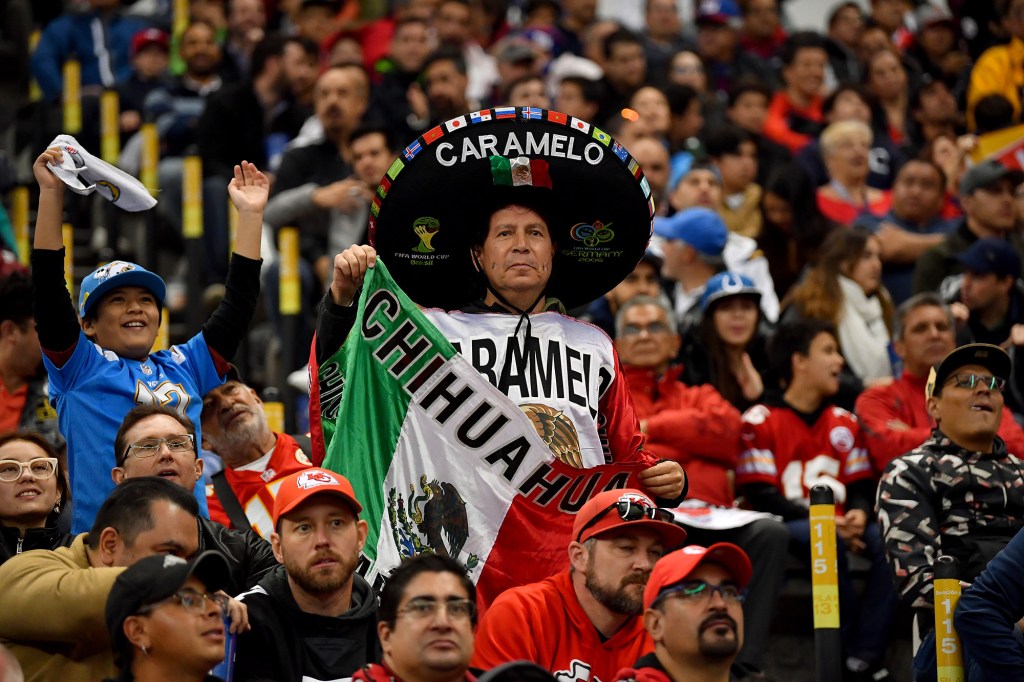 The Estadio Azteca has an elevation of around 7,200 feet.Alika Jenner/Getty Images 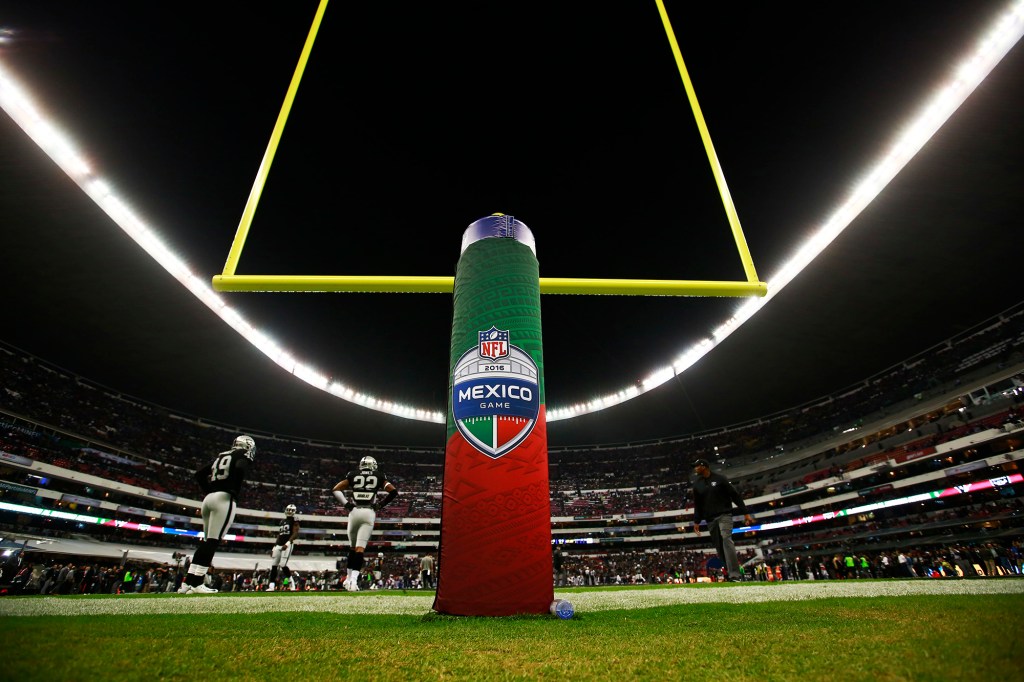 Mexico City has tips posted on its website for visitors to learn about the potential for altitude sickness.Miguel Tovar/LatinContent via Getty Images

Usually, Denver boasts having the highest elevation game, but because of the league’s international series, the Estadio Azteca wins out at an elevation of around 7,200 feet.

Medical experts say people who are not accustomed to high altitudes can see increased exhaustion because of the body’s inability to transport oxygen.

Mexico City has facts and tips posted on its website for visitors to learn about the potential for altitude sickness while visiting the Central American country. Wizard Wobble A Wake-Up Call For Marvel As...